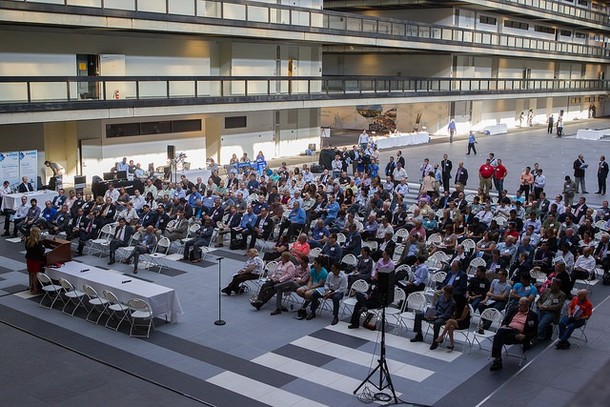 Based on number of time these stories were opened, here are the ten most popular articles from our “Around New Jersey” section of NJTechWeekly.com in 2015.

1. Bell Works Mindful of its Bell Labs History as First Tenants Move In By Benjamin Doda

By far the most popular story in our “Around New Jersey” section, this story of the redevelopment of the Bell Labs site in Holmdel captured our readers’ imaginations.

Two teams of students — one from Franklin Borough School (Franklin) and the other from High Technology High School (Lincroft) — recently learned that they had been selected as “Best in State” in the third Verizon Innovative App Challenge.

4. Rutgers Students Team with Verizon Employees to Show Middle Schoolers that STEM is Fun By Esther Surden with Ellen Yu

A Russian national accused of plotting the largest computer hacking scheme ever prosecuted in the U.S. pleaded not guilty today during his first appearance in a federal courtroom.

AT&T has been busy with STEM activities in the Garden State. On Feb. 24, AT&T’s Bedminster facility held its annual Student Innovation Competition, with about 150 students from Elizabeth, Jersey City, Newark and New Brunswick.  Later that week, the company hosted 120 students from Elizabeth, Lavallette, Matawan, Middletown and Red Bank at its facilities in Bedminster and Middletown, to discuss careers in technology.

7. Rutgers HackHERS Hackathon Encourages Women to Get Excited about Coding  By Steven Galante

Hackathons organized by university students or faculty have become standard fare at schools across the country. But on Feb. 7-8, three female STEM students at Rutgers ran a hackathon with a twist: HackHERS, which targeted women.

8.  Nobel Prize winner, co-inventor of the laser remembered as pioneer at his former N.J. lab  By Katie Lannan | NJ Advance Media for NJ.com

When Bell Laboratories announced consultant Charles Townes’ 1964 Nobel Prize win, the statement they sent out heralded the new technology of lasers as an invention that “holds promise” for the fields of research, industry, surgery and communications. Working with his brother-in-law, Townes secured the first patent for a laser in 1959 through Bell Laboratories.

Meta Jersey, a tool to help journalists and others figure out the reasons for town-by-town census shifts in the state, took the top prize in Hack Jersey 2.0, a weekend-long hackathon that took place at Montclair State University over the weekend.

Previous: Besides Money, What’s Missing from the NJ Tech Startup Ecosystem? Part Two
Next: At the GNEC Annual Breakfast, Judith Sheft Talks About Linking and Leveraging