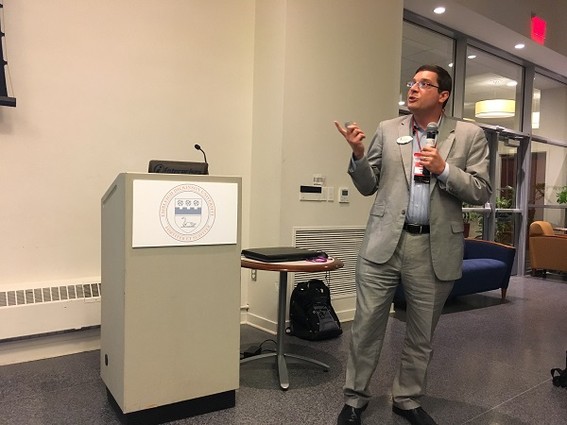 Michael Shapiro, who founded TAPinto.net in 2008, now operates a network of more than 65 franchised online local newspapers in New Jersey and New York, with a total of more than 5.7 million readers.

Shapiro came to the Morris Tech Meetup in April to tell his story. He told the audience that he expected to have about 250 TAPinto sites by the end of 2020, with 15 million readers. “We want to become the nationwide model for sustainable local journalism.”

Shapiro, who grew up in Livingston and went to Rutgers, was a lawyer practicing in New York, commuting from New Providence. He was working in litigation and conducting internal investigations of companies, “which was interesting, but nothing I was passionate about.” Then his one-year-old son needed open heart surgery. “I was working crazy hours. … It really changed my outlook on things because, during the whole first year of his life, I barely saw him between commuting back and forth to the city.”

At that point, Shapiro and his wife Lauryn decided to create a nonpartisan online newspaper in New Providence, as well as one in Summit and one in Berkley Heights. At that time, they called it “The Alternative Press.”

“The object was to build this to a point where I could leave my job and do it full-time,” he said. “We started working on it and we started getting requests from people to expand it to their town. So we launched in Chatham and we launched a site in Millburn.” Shapiro was able to leave his job in February 2009.

About two weeks after Shapiro quit his job, AOL, then at the height of its popularity, launched its own local online news sites called “Patch.” When Patch first launched, “no one knew they were backed by AOL,” he said. The first Patch sites were in Millburn and South Orange-Maplewood, giving TAPinto severe competition. The next logical place to launch was Livingston, so TAPinto did, and Patch launched in Westfield. “Then it became public that they were going to go all over the country and spend” millions. “At that point my wife said, ‘Great job leaving the law firm!’”

All of this coincided with the Great Recession, which started in 2008. “What could we do? We had to survive! So, we put out the highest-quality original local news that we could, and continued to develop relationships with the local businesses in the towns. And we went head-to-head with them for four years. Thankfully during that four-year period, we not only survived, we thrived.”

In fact, Shapiro had to keep saying no to people who wanted a TAPinto site in their town because “we weren’t sleeping … but it started me thinking about how we could expand and yet keep it really local.”

Timing was everything. “We came up with this idea of franchising local news. In December 2013 we started franchising. Ironically, the same month, investors at AOL had gotten upset that Patch had lost at that point about $300 million. So, AOL laid off 90 percent of all their journalists across their network,” Shapiro explained. “In New Jersey, at their height, they had about 225 journalists for their 84 sites.” Patch began aggregating content and publishing user-generated content, Shapiro said. That drove demand for The Alternative Press.

When the site began franchising, Shapiro decided to rebrand. The “Alternative Press” name made people think it was a political site, which wasn’t doing the brand any good. Their solution was to take “TAP” from “The Alternative Press” and add “into” to suggest the idea of tapping into a community.

“Presently, we are the only scalable, profitable online local newspaper system in the whole country,” Shapiro said.

At the same time the company rebranded, it added features to the site to make it more profitable, both for the franchisees and the publisher. When it comes to content, for example, sites can share articles with a touch of a button. If Madison is playing Chatham in football, only one of the TAPinto sites needs to cover it. Then both sites can use the story, reducing the resources required. If the headline is “Chatham Crushes Madison,” when the Madison TAPinto site gets the story they can change it to “Madison Battles Chatham.”

Shapiro said that advertising coupled with content marketing has been one revenue stream, but about a year ago they developed several new revenue streams. One is sponsorships, under which every single section on every site, including the town calendar, can be exclusively sponsored by a business, with its logo displayed. Sponsors also get a feature-branded column which they can write as often as they like, with backlinks to their website to improve SEO.

People who subscribe to a TAPinto site can get a news-packed marketing newsletter by email each morning. For businesses, there are three exclusive adverting spots in the e-newsletter that are sold on a weekly basis. “We can also do an email blast to an entire town,” said Shapiro. “For example, Union County College does an email blast about their open house days to residents of Union County.”  “Moreover, the company offers premium listings and sponsored event notifications on its sites, and sells ad space on its app.”.

The franchisee reports the news for its town and manages the ad sales from the businesses in that town. “We basically provide the whole infrastructure and the administration,” Shapiro said. “So, we provide the back end, customer service, the site, hosted email accounts and tech support. We train them on the sales side, the editorial side and how to use the site. We set up their Facebook and Twitter, and we train them in social media. Then we handle all their billing and credit card processing from advertising.”

Previous: Sanjay Macwan Wants to Connect New Jersey to its Innovation Core And THIS is How He’ll Do It
Next: Technology Marketing in the Digital Age: Digital Marketing: Five Myths Explained