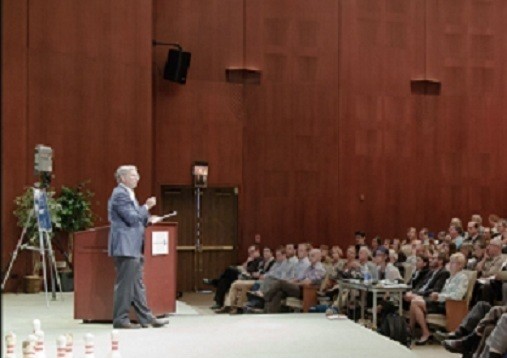 Dennis Ritchie passed away nearly a year ago, and on Sept. 7, 2012, Alcatel-Lucent’s Bell Labs (Murray Hill), where he worked for his entire career, paid tribute to him at an event called “The Lasting Legacy of Dennis Ritchie: The Impact of Software on Society.” Ritchie is the famed Bell Labs scientist who, along with Ken Thompson, created UNIX.

While working on UNIX, Ritchie developed the C programming language and, with Brian Kernighan, now a professor of computer science (CS) at Princeton University, wrote the seminal book on C that is still in print.

The invited audience filled the Bell Labs auditorium and included a great number of people who had worked with Ritchie in some way over his long career. As one attendee tweeted, “There are some hardcore grey-beards here.” And so there were. Besides the shy Ritchie’s colleagues and admirers, his siblings were there to pay tribute to their brother.

Emceed by Susanne Arney, the head of Bell Labs North America, the day featured an assortment of presenters.

Ritchie’s contributions to the world of computing cannot be underestimated. As recounted in a video played for the audience, Ritchie and Thompson developed UNIX after Bell Labs pulled out of a joint development agreement with MIT and General Electric to create Multics because that operating system turned out to be too unwieldy. The two developers had been working on the project.

Thompson regretted leaving behind the Space Travel game he had created for Multics, so he ported it to an old computer in the laboratory, and together he and Ritchie began the development of UNIX in their spare time. Later Ritchie worked with Steven Johnson to transport the operating system to other hardware, which demonstrated its widespread usability.

Columbia University CS professor Al Aho gave an overview of how influential Ritchie’s invention of C really was. “Many of the mission-critical operating systems today are written in C. You can’t make a phone call, fly a plane or operate a car without using some of Dennis’s inventions,” he said.

Once compilers became available for C, Aho said, it became the language of choice not only for programming UNIX-run computers but for other operating systems. For example, Microsoft implemented its Windows operating system in C. In fact, today NASA’s Curiosity rover, now on Mars, “is controlled by 3.8 million lines of ISO-standard C,” he said.

Ritchie’s co-author, Kernighan, who made it clear he had nothing to do with the actual development of C, praised his colleague’s clarity of writing and spoke about the genesis of Ritchie’s famous quote, taken from a commentary on the UNIX kernel — “You are not expected to understand this!” — which showed up on T-shirts for a time.

Ritchie meant the comment in the spirit of “This won’t be on the exam” and in the commentary tried to explain the thinking that went into creating this particular piece of difficult code.

David Patterson, professor of CS at the University of California, Berkeley, and now a proponent of Massive Open Online Courses (MOOC) about software engineering, talked about how he used UNIX in all his projects, including developing reduced instruction set computing (RISC) and redundant array of independent disks (RAID). He added that UNIX is the reason he has a truncated email address: it couldn’t handle a nine-letter login in the 70s, and the address has stuck with him ever since.

Also paying tribute to Ritchie was Eric Schmidt, Google’s executive chairman, who returned to Bell Labs, where he had been a summer student in 1976. “I worked for some extraordinary old geniuses,” he said. Later, doing the math, he found out they were only in their 30s.

At Bell Labs, Schmidt helped develop the Lex language-related program with Mike Lesk. He has moved on from programmer and software developer to visionary, and his presentation reflected what he believes is the role of networks in a changing society. Networks are changing the world, Schmidt said, and making an impact on education, global brands and increasing economic power for the poor. “I believe technology is a tool to solve problems,” he said, turning to the Bell Labs audience, and “the people here are problem solvers.”

Speaking of Ritchie’s contributions, Schmidt said the technology came along, and clever people, a preponderance of them here in N.J., managed to have a nonlinear, global-scale impact because of it.

“I predict the future will come sooner and be stranger than we think. … We start with this dream where everyone is connected, everyone lives longer and the poor are lifted up and given a new voice. … This is what is so important about the historical narrative we heard today. We are not at the end of something; we are at the beginning,” Schmidt said.

Before Schmidt’s presentation, Bell Labs researchers presented a rich array of projects the company is working on today. Near the day’s end, Ritchie’s family spoke. His sister discussed the mystery of Ritchie’s vanished doctoral dissertation, and one of his brothers performed a song he had created and dedicated to him.

Bell Labs has posted many of these presentations, including those of the Ritchie family, on YouTube.