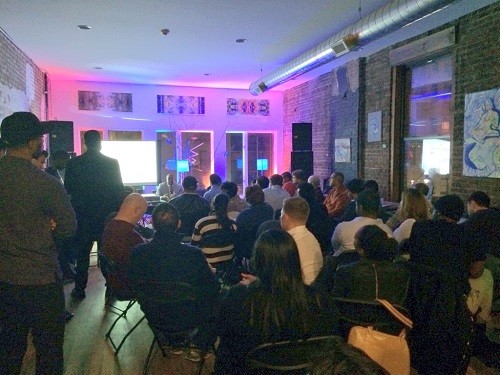 BrickCity Tech Meetup joined forces with Lean Startup Machine Newark on Nov. 8, 2013, during Newark Tech Week to present “The Rise of AllHipHop.com and the Future of Online Journalism” with the website’s founder and CEO, Chuck Creekmur.

Creekmur’s successful website, which is based in Newark, draws millions of viewers monthly. He was interviewed at the event by Anthony Frasier, founder of BrickCity Tech Meetup and cofounder of The Phat Startup.

Frasier said he had started visiting AllHipHop.com at age 14, when he was what he called a “wannabe rapper.” He recalled, “They used to have a message board for the community. I would sit there and write rhymes and I’d battle the community with my rhymes. This was a big inspiration in getting me into hip-hop.”

Creekmur spoke about what lead him to start the site, which he began with his business partner, Greg Watkins, after graduating from college. “I’m originally a journalist by trade, and I always wanted to work at The Source magazine [a monthly covering hip-hop music, politics and culture], but it didn’t work out that way,” he said.

“I’ve always had an independent spirit and always aspired to run my own operation, so after looking at how expensive it would be to publish our own magazine, I stumbled upon the Internet.” He noted that this is his company’s 15th anniversary, so it was early days for the Internet when AllHipHop.com got started.

Creekmur said he had taught himself to use software like Photoshop and Dreamweaver, which he had had access to at college. He eventually began to create funny websites and pictures.

“Basically I merged all my talents: hip-hop, music, culture and politics. Greg brought a lot as well. We were a little crazy, but we brought it all to AllHipHop and we grew from there. We grew quickly.”

Frasier wanted to know about the hardships Creekmur’s company had undergone as it was taking off. “I think the biggest challenge for us was to navigate through the waters of business,” Creekmur replied. “We embraced technology very quickly. We were early adopters of just about everything.

“However, we were unprepared for our early success. People like Russell Simmons were paying attention and wanted to invest. We met with Jay-Z a few times. We weren’t ready. It was fortunate that we didn’t take those deals, although at the time we were starving,” he noted.

Frasier asked Creekmur to provide advice to entrepreneurs trying to meet people who can help get them to the next level.

Basically, said Creekmur, “everyone is trying to get something from you in the music industry, so you have to come to the table with something. … If you aren’t able to offer up something, people aren’t going to want to take the meeting. … I think you have to be willing to give [in order] to receive. That can be hard labor. Or that can be technology, or helping someone get their Twitter account right. But if you don’t offer something, people at that level generally won’t be receptive to you.”

Later, in response to an audience question, he added, “I’m not the best networker. I’m a shy guy. A lot of my networking came about naturally.”

Creekmur said when he knew he wanted to go into hip-hop, he took an internship at a startup in the field (that later failed). “In the midst of that startup environment, I met almost everyone I needed to know. … those people gave me the foundation to be able to network with anyone,” he recalled. Later, he said, he took a gig working retail and ended up meeting additional people in the industry.

Said Creekmur, “Overall, I was out every night. Some would say it’s just partying, but you are really building real relationships. It’s the constant repetition of seeing people over and over, chillin’, eating wings, whatever. It becomes very, very natural.”

The journalists in the audience were interested in how the site continues to gain traffic.

Said Creekmur, “It’s tough. We came about during the original dot-com boom.” He explained that traffic had grown due to “viral marketing in its purest form.” Also, he said, “We were the first in hip-hop to create mobile alerts” by using Motorola two-way pagers. When something happened, his website would be the first to report it.

“That word of mouth was very important to us. To this day, we haven’t really realized the power of mainstream, traditional marketing. Now that we are ‘old,’ we want to push the envelope beyond viral,” he said.

A lot of hip-hop sites lack real journalism, but not AllHipHop.com, Frasier commented. He asked Creekmur how the site is able to maintain its journalistic content.

“You absolutely have to acknowledge the changes” in audience taste, Creekmur replied. “When we first started, we would do a 2,000-word Q-and-A story,” he said, noting that the website can’t do that now.

Also, he added, “We’ve changed our news voice. It’s a little quicker. We allow the writers a little more freedom. We don’t do AP [Associated Press] style any more, like we used to. We are embracing video much more.”

Creekmur added that the site had always embraced video, but, he said, “Now we are looking to video as the future model for us, going forward.

“I absolutely think there is a future to journalism. I don’t think we need to lose that because people don’t want to read. I think you can still engage the user [in a way] that … makes them read, or you repackage it [the content] in another form and still give them that information,” he said.

In response to an audience member’s question, Creekmur said that for his website, content has always been king, but it’s increasingly difficult to keep up with. “Artists are hard to get at. The content is almost real time, it moves so fast now.”

“However, we have an archive that is out of this world. We were recording interviews before YouTube, before that was a real platform. We used [a] RealAudio player — things that are archaic now. We just wanted to have the footage. We didn’t do it nearly as much as I now wish we had.”

Another audience member asked what Creekmur sees as the future of monetizing online communities that revolve around a hobby or interest.

Creekmur pulled no punches, noting that there may be a ceiling for those communities: “I’ll be honest with you — we are looking at that. Right now display ads aren’t doing well. You get paid well for mobile and video. We have some things we need to work out right now in our company, like relaunching the site and addressing mobile in a serious way, and then we are going to try to create apps — like an ‘Angry Birds’ — that have no hip-hop identity. You won’t even know it’s us.”