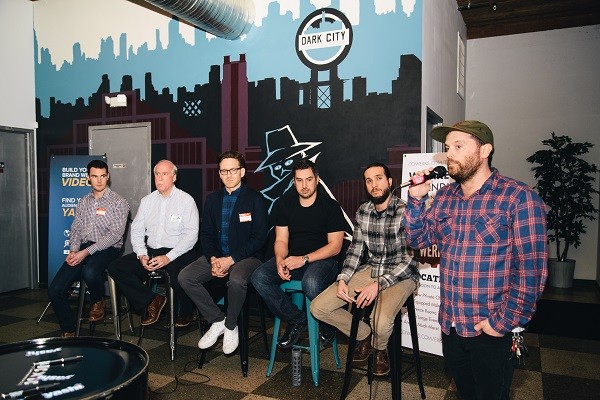 Companies seeking to promote their products should consider using online video technology, said industry experts who participated in a March 30 panel discussion titled, “How to Build a Better Brand with Video.”

The discussion, which was part of Jersey Shore Tech Meetup’s ongoing series of technology-related topics, was hosted by Cowerks coworking space in Asbury Park and presented by Toms River-based Yashi, a location-focused online advertising platform.

More companies today are using online video advertising to help capture the short attention spans of consumers, who are constantly inundated by a barrage of marketing messages from print and broadcast media, the Internet, events and other sources, said the panel members.

Industry statistics confirm that online videos are playing a huge role in how products and services are marketed in today’s digital economy.  For instance:

The panel’s speakers agreed that pre-roll and programmatic videos are quite popular for targeting and engaging audiences, and for helping companies track their advertising spending.  Pre-roll videos are brief ads — usually 15-second or 30-second spots — that are shown before the content is played.  “Programmatic” typically refers to the use of software  to purchase digital video advertising, thereby automating ad-buying activities.

According to Cladek, the technology used in creating these videos enables marketers to acquire valuable data about who is watching the videos, as well as other key demographic information.

He gave an example of a company marketing to a Hispanic audience that had hired Yashi to provide them with zip codes, Web browser information and other data captured on those who clicked on the company’s video. Yashi used extensive data collection on this particular audience to ensure that they “fit in the right demographics,” viewers who’d be most interested in this company’s product, Cladek said.

Scanlon noted that a cable television company that he had been involved with had used pre-roll videos that “targeted the company in a positive way.”

But it takes more than technology to make videos an attractive marketing tool.

Worth explained that a successful video ad must include a compelling story line that quickly engages the viewers. Without it, the viewers might not pay attention to the marketing message, or worse, might click off the video and go elsewhere.

“All media is about that attention-grabber in the beginning,” he said.

While it’s important to produce captivating video ads, you mustn’t risk alienating your audience by using inappropriate material that could create confusion or a negative reaction.

“You don’t want to have a woman wearing a bikini leaning over a motorcycle when you’re trying to sell kitchen countertops,” said LaManna, who is also CEO of Vydia, a Freehold-based digital platform that distributes, promotes and monetizes videos by musical artists.

Strong graphic content is also a necessity in creating videos that resonate with the audience.  Scanlon noted that it’s easier nowadays to produce videos with “great imagery” because the technology for creating alluring graphics is more accessible and affordable.

In addition, crisp and clear audio is considered an essential element in producing a video ad and, in some cases, more important than the visual component.

As an example, Worth pointed to the critically acclaimed box-office hit “Blair Witch Project.” Although it’s not a video ad, Worth said that it proves the point that audio can sometimes make or break a video, or in this case, a feature film.  He added that the shaky camera work in the movie didn’t distract viewers, but the film probably wouldn’t have been as successful if it had poor audio quality.

Digital video marketing isn’t exclusive to national brands. Cladek noted that a local business can spend as little as a few thousands dollars on a three-month campaign, depending on the size of the market location and target audience.  In comparison, a national video branding campaign typically runs in the six-figure range for the same period.

Cladek expects video ads to continue gaining popularity as a branding tool because they are highly cost-effective and efficient in reaching a company’s target market. “It’s all about making sure that your ad is in front of the right people.”

Previous: Explainer: Protecting New Jersey's Power Grid Against Cyberattacks
Next: How a tiny drone could take on a big job on a major interstate bridge