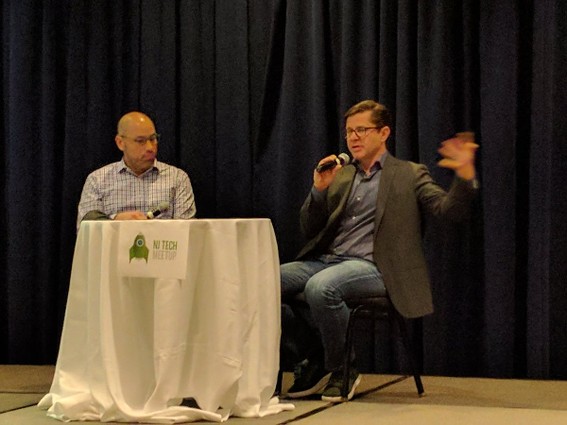 The NJ Tech Meetup celebrated its 80th monthly anniversary on January 26 at Stevens Institute of Technology, in Hoboken. According to Aaron Price, NJ Tech Meetup founder and organizer, group membership is now at a record level: north of 6,200 members.

As he introduced the evening’s festivities, Price also reminded attendees that the second annual Propeller festival (“Where Innovators of the Northeast Unite”) is currently in the planning stages for this year’s event, with the details coming soon. Anyone interested in volunteering and getting involved in some form or fashion should reach out to Price.

The featured guest at the NJ Tech Meetup was Michael Duda, managing partner of Bullish (New York), an accelerator designed for businesses “living early on the S-curve.” As usual, several small and promising startup businesses pitched to the audience, including MyTown, Qeep and the audience award winner, Vydia (Holmdel). Then there was a fireside Q&A between Price and Duda.

Bullish’s focus is almost exclusively on consumer-facing organizations and, according to Duda, there is a very good reason for that. Principals of the firm are primarily Madison Avenue ex-pats, which makes for a competitive advantage and results in a unique hybrid organization. One part of that hybrid emphasizes the creation of strategic advertising content for its stable of brands, while the other makes investments and helps incubate and accelerate the growth of its clientele.

Notable successes and household names in its portfolio include, just to name a few: Warby Parker (New York), a vertically integrated eyeglass company that has dramatically disrupted this sector; Casper (New York), a mattress firm targeting millennials; GoDaddy, an internet website powerhouse famous for its attention-grabbing Super Bowl ads; and Harry’s (New York), a company that has literally shaken up the shaving products market.

How does Bullish select its clients and industries? That is, of course, the “secret sauce.” But Duda did generously offer a few clues to the audience. The firm makes an average of only five investments a year, so it is clearly very discriminating.

“We view a brand as a set of values. What would people say about you when you leave the room?” He pointed to a key indicator that Bullish uses to evaluate brands, known as the “Net Promoter Score” (NPS), which “tracks the overall percentage of customers that not only like and purchase a particular product, but also advocate for it. We especially like it when one company has a strong NPS and their competitors do not.”

For example, in the snacks category, KIND Bar (not affiliated with Bullish, but a good example cited by Duda) boasts a very high +51 NPS ranking (scores range from -100 to +100), while a host of its competitors have significantly lower scores among surveyed consumers.

Bullish seeks out consumer categories with low overall brand loyalty, and then drills down to see if there are possible candidates within the category that could potentially dominate and disrupt, standing out above the crowd and ultimately generating a high NPS, which often equates to a solid market share and profitability.

Another example of a high-engagement brand in Bullish’s arsenal is Birchbox (New York), a monthly subscription service that mails its users samples of beauty products every 30 days. Said Duda, “They had a zero cost of customer acquisition in their first year, as excited people took photos of themselves opening their boxes,” which they ultimately shared on social media, resulting in a huge level of free advertising.

The quality of the senior management at a target company is also a critical factor for the Bullish team. A great idea doesn’t necessarily make a great business. When it comes to the entrepreneurs in the executive suite, “passion and attention to detail are very important qualities we look for. Managers need to be stubborn, relentless, but also naïve and coachable,” Duda said.

In conclusion, he gave some advice to budding entrepreneurs seeking to launch their own startups: Raising capital isn’t necessarily a great strategy, especially early on. You end up with debt and dilution.

Duda added that many consumer company founders are female, citing the figure of 46%. And, he noted, the fact that over 80% of consumer buying decisions are made by women is a key explanation of why so many female entrepreneurs achieve success.

Rob Rinderman is the founder and president of SMC Consulting (www.smcconsulting.biz), a strategic marketing and communications advisory firm.

Previous: After 5 Years, JuiceTank Closing Somerset Venue; End of One Chapter and Beginning of Another
Next: Coding for Community Helps Towns, Cities Develop Apps on Their Wish Lists