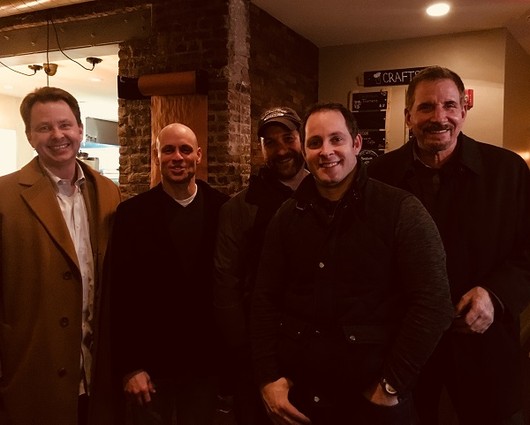 At the recent “Founders Garden” Mastermind event, held by Upstart Garden, local business owners gathered on January 25 at the B2 Bistro + Bar, in Red Bank, to share ideas, best practices, referrals and, of course, pizza.

The Upstart Garden meetup, started in May 2017, is a mix of nontech, tech, and tech-enabled business owners (and new “ideators”) in the greater Red Bank area. It’s the brainchild of founder TJ Pingitore.

Upstart Garden’s primary goal is to make tech accessible to all, in order to help the local community thrive, both interpersonally and professionally. Tech is the present, and the future, but the scene can feel exclusive or unwelcoming to those who should really be part of it. Pingitore said, “We are looking to change that by fusing tech into businesses that need it, and being around others like us who can educate our businesses on using tech to grow efficient businesses forward.”

The Founders Garden event opened with casual networking and introductions of the nine founders in attendance.

The friendly, informal atmosphere facilitated open, honest conversation among peers about the trials of entrepreneurship. Bradley Beach, Founder of Covellus, said, “there are just so many no’s,” and he stressed the importance of perseverance and tenacity in following up with sales or pitches.

Pingitore updated the group on the TechLaunch BullPen pitch event that he had attended at Rutgers the day before, speaking highly of two of the featured companies 1Degree  and Welnys (Jersey City). He mentioned two upcoming Upstart Garden events, with the dates to be determined, one later this month and a possible collaboration with Monmouth University in April.

Phil Antoon, a local resident of Red Bank and Managing Director at Alvarez and Marsal,  mentioned a survey that was being conducted of local companies with more than three employees. The group agreed to participate in the survey to help out; also, they’d get feedback for themselves that might help their own companies.

The conversation then focused on efficiency and productivity, with attendees sharing technology or best practices they had found helpful. Technology recommendations included Asana and Calendly for faster scheduling and better project management.

Seasoned tech business owner Kevin Squires, of Kestee Corporation (Rumson) said, “I’ve been in tech for 25 years, but I still use pen and paper to stay focused on my list every day. The act of writing just makes it all more concrete for me.” But Eveline Brownstein, Kevin’s business partner, highly recommended the app SplenDO.

Chris Tomicki, CEO of Profit Tek (Red Bank), stressed the intersection of “purpose, performance and profit” in his work, which entails consulting with companies; and this prompted a conversation about emotional intelligence.

The group discussed the benefits of mentoring and the increasing need for more human interaction to compensate for the effect of social media on interpersonal skills and interactions. Another member suggested taking interns or younger employees to networking events, and noted how it helps owners or founders be more efficient when sharing information about the company to many people.

That conversation digressed into comparisons of Millennial, Generation Z and Generation X cultures, noting the need to bridge all the generations in the workplace for the sake of better communication and productivity.

Pingitore then projected a business-planning matrix onto a wall and said that he’d email it to the members. He also referred to an article about the top 10 Gmail “hacks” that many people didn’t know about, despite using Gmail daily.

Concluding the meeting, Pingitore noted that the group is looking for a location in the Red Bank area in which to open a collaborative coworking space.