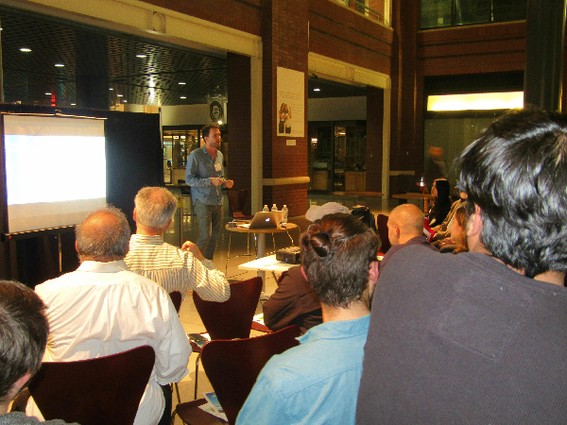 The torrential rainstorms Nov. 29 didn’t dissuade members of the Jersey City Tech Meetup group from congregating at the Harborside waterfront complex to hear a couple of startup community speakers. The evening’s host was Daniel Sullivan, the events and outreach coordinator at the NJ Tech Council.

Although the Jersey City Tech Meetup is still relatively new, Sullivan said that the group’s calendar already features a number of upcoming events to bring together like-minded folks from around Hudson County, so they can network, learn from each other and benefit from the knowledge and experience of the guest speakers.

The keynote was given by Matthew Hamilton, senior product manager at Venmo (New York). Interestingly, he chose to focus on the electronic payments ecosystem as a whole, including the current state it’s in. He also discussed how it has evolved to where it is today, and concluded by predicting three trends for the electronic payments field.

For those not familiar with Venmo, it is essentially a free digital wallet that allows its customers to pay others electronically. It is ideal for such uses as splitting cab or ride-sharing (Uber, Lyft, etc.) fares, dividing up a meal check or even reimbursing a roommate for monthly rent and utility payments.

The company is owned byPayPal, which was established back in 1998, went public via a successful IPO in 2002, and was acquired by eBay later that year; eBay then spun PayPal off in 2015.

According to a recent CNBC story, 18-34 year-olds (Millennials) are six times more likely than either Baby Boomers or Gen-X’ers to use Venmo — as opposed to cash, a check or a credit card — to settle payment transactions.

During his talk, Hamilton said, “Credit card users increasingly expect rewards for signing up and using their cards, such as points or miles that allow cashing in for prizes or future flights, for example. The downside for banks, airlines and other card issuers is that this negatively impacts their profit margins and significantly increases the competitive landscape.”

To date, Venmo users have been quite loyal to their app brand, but the playing field will likely remain quite competitive. And there will continue to be lots of federal and state laws and regulations to navigate.

So what lies ahead? Below are the three key trends in the payments space that Hamilton said we should be on the lookout for.

Jacqueline Loeb, cofounder of Scouted (New York), an SaaS (Software as a Service) job-placement and employee-matching company, was the opening speaker at the meetup. She highlighted her organization’s success in creating algorithms that work to create a “meritocracy of talent” for the legion of less-tenured members of the workforce.

According to Loeb, “Scouted helps companies make better hiring decisions. A big focus is connecting recent grads with startups and other similar companies. We help candidates advocate for themselves and ‘better tell their story’.”

Scouted’s target market actually ranges from college sophomores to those who have already entered the job market, but have less than five years of employment experience.

Loeb said that Scouted is the “Common App” for the job market, and that it helps facilitate the application process for candidates. She said that if candidates could tell their stories more effectively to prospective employers, they would accomplish more than they would by just sending a resume and standard cover letter.

Rob Rinderman is the president of SMC Consulting, a strategic marketing and communications advisory firm.

Previous: State Seeks High-Tech Oversight of $2B Annual Spending on Drug Benefits
Next: NJ Tech Must Own the Clean Technology and Sustainability Revolution