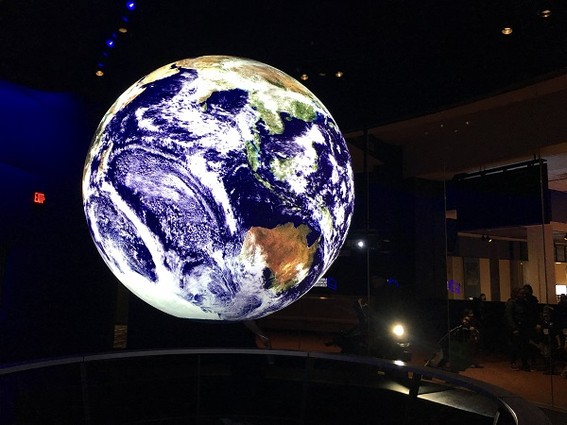 The Liberty Science Center (Jersey City) is opening an exhibit at its new Weston Family Lab for Earth and Space Exploration to coincide with Astronomy Day (April 21) and Earth Day (April 22).

The exhibit, “Science on a Sphere,” is a suspended sphere, six-feet in diameter,  that displays the Earth (or other planets) in brilliant detail. It was developed by the National Oceanic and Atmospheric Administration (NOAA). There are 150 of these Science-on-a-Sphere exhibits around the world, but this is the only public one in the greater New York metropolitan area, according to Liberty Science Center President and CEO Paul Hoffman.

Visitors to the Lab will be able to experience images of tectonic plate motion, melting sea ice, tsunamis, earthquakes and hurricanes projected onto the Sphere; and they’ll be able to see these images in real time. Visitors will also be able to go back in history and trace Hurricane Sandy’s path or view volcanic activity over time. The data-enabled visualizations are stunning in their detail.

The Lab was made possible by a $2 million gift from Josh S. Weston, cochair of Liberty Science Center’s Board of Trustees and a long-time supporter.

“It’s the same technology that you use in full-dome video in the planetarium, where you have four projectors to get good resolution, and each one covers a quarter of the sphere and it’s all lined up to cover the entire globe with planet-wide images,” Michael Shanahan, planetarium director, told us.

“The databases are presented in a playlist. NOAA has developed over 500 data sets that you drop in. You can also create and refine your own programming, and NOAA has made it easy to add in extra rendering for the images.”

Information about “real-time clouds and weather” gets updated many times a day, Shanahan said, and it then gets projected onto the globe. “If there is a hurricane coming, we can show it on the Sphere. And if it’s updated every two or three hours, then we are within two or three hours of being accurate.”  The data for earthquakes and volcanoes over the past month are also updated in real time, he said.

Amid the chatter of four-year-olds who had been invited in to see the exhibit before it opened, Hoffman told NJTechWeekly.com that LSC will offer constant programming in the new space. “We will have public programming for our families and other guests, and then we will have enriched programs for our quarter of a million kids who come here for hands-on laboratory experience. This is not a passive experience. We can pass iPads around and people can control data and compare it.

“What this is doing is using near real-time data, so if we wanted to look at what is happening in weather patterns around the world, we could look at that. During the next hurricane season, you’ll be able to see hurricanes developing and the difference between the various meteorological models,” he said.

“You can also look at this data historically, so you can go back in time and see where Hurricane Sandy struck in New Jersey.  It is not just hurricanes. We can look at tectonic plates, earthquake activity. If we have another unfortunate nuclear accident at a power plant, and if there is a radioactive plume emitted, we’d be able to follow where it is in the atmosphere.

“What I love about this is that it takes data, in many cases real-time data, and presents it in this incredibly beautiful way; and I think a ton of learning can take place because of that,” Hoffman said.

The sphere weighs 50 pounds and is suspended by cables. “The heavy lifting [in creating programming] was done by NOAA and its scientists,” Hoffman explained. “We can use this data and will create new programming from it. We can also use programming from any of the other 150 sites around the world.”

The Weston Family Lab sits near the entrance to LSC’s new Jennifer Chalsty Planetarium and Giant Dome Theater, which LSC says is the largest and most technologically advanced planetarium in the Western Hemisphere. The recently opened planetarium boasts a resolution of 88 million pixels, a lighting system that can produce over 281 trillion individual colors, and new speakers capable of producing 30,000 watts of digital sound.

Hoffman noted that the planetarium is backed by a large server. “It stores millions of images, and we are getting new ones on a daily basis from NASA, from the European Space Agency, from observatories all around the world. And the reason it needs to be on a server is that it is a theater with 400 people, and if the presenter wants to call up an image or a guest has a question,” it can’t be like a home computer that takes 20 seconds to load. “It has to be almost instantaneous because it is a theatrical experience.”

At the end of the conversation, NJTechWeekly.com asked Hoffman what was happening with SciTech Scity, LSC’s planned curated community of tech entrepreneurs, scientists, students and others that will be built around the Liberty Science Center .

In addition to LSC, SciTech Scity will have three pillars: theLiberty Science K-12 School, which will bring science and technology education to Jersey City; Edge Works, a reimagination of the workplace, with more than 80,000 square feet of research labs, private studios, open workspaces and a conference center; and Scholars Village, a purposeful mix of housing for graduate students in STEM fields and longer-term residences for entrepreneurs, scientists and their families.

Hoffman said that LSC would soon be submitting a site plan for the project to Jersey City. EY signed on as founding corporate sponsor of the project in January, “and the project has a lot of momentum now,” Hoffman said.