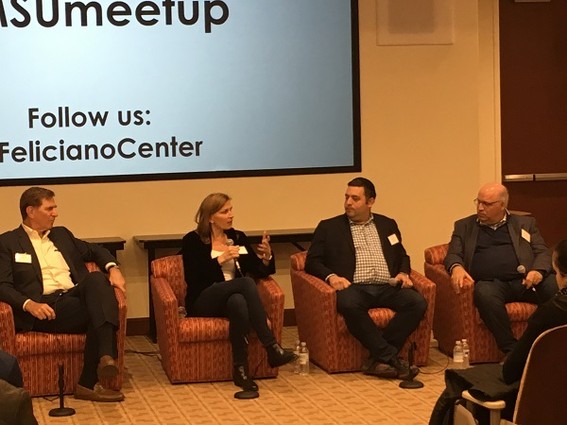 Two tech entrepreneurs and a venture capitalist who was formerly an entrepreneur shared their stories and expertise on selling companies at a Montclair Entrepreneurs meetup in February.

The bottom line: Each exit experience is different, and there are lessons to be learned from all of them.

Starting the ball rolling, Sorin asked the panelists to give an outline of their experiences with exits. Allegra went first. He noted that, as a VC, he’s been involved in over a dozen exits, with the latest ones including a sale to Oracle and a sale to PayPal. However, his own exit came when he sold his company, Princeton Softech, to another New Jersey firm.

Next, Kyser pointed out that she had sold the assets of her first company, which she had started right out of college. Another company, C3i, Inc. (Morristown), a $100 million VC-funded global technology solutions firm that she cofounded in 1993, was sold to Telerx (Horsham, Pa.) a division of Merck.

Cohen mentioned that he had recently exited TelAPI, which he sold to former New Jersey company Avaya (Santa Clara, Calif.); and he was eager to talk about it. TelAPI had grown as an offshoot of Cohen’s primary business, TelTech, which develops mobile apps. TelTech was building apps for Android and iOS that all had one thing in common: The apps provided communications solutions.

“Because each app had a front end to the Android and iOS platforms, we had to manage and build to several platforms,” said Cohen. “In addition, we had a telecom component that had to be built and managed for each of the apps.”

TelTech had different teams of developers, each one charged with building a particular app, but this arrangement made it hard to scale the business. “We came up with an idea to build a unified communications platform that could power all of our apps, to centralize all of our energy into one platform,” he noted.

“It was a big task to build it, but when we were nearly finished building it, another company came out with a very similar platform: ‘Twilio.’”

Twilio took the idea one step further, he said, by opening its platform to other developers, enabling their customers to generate phone calls, text messages and use many other communications functions.

“For technical purposes, it didn’t make sense for us to move our apps onto Twilio, but we took their idea of opening it to the public,” Cohen explained, adding that his company made its apps “available through a separate entity,” which was TelAPI.

“TelAPI proved really useful for us,” he added. “It allowed us to scale better and grow, and we were able to grow apps quicker and manage them better.”

A couple years after TelTech had finished building the platform, the founders were approached by a few companies that “saw the Twilio success and the buzz around that space. We ultimately sold TelAPI to Avaya one year ago. We refocused on mobile apps, and we are doing great.”

When is an Appropriate Time to Exit?

Moving on, Sorin said, “I’m always intrigued by the level of commitment and passion that it takes to take a company from inception or ideation to the point of commercialization and ultimately to monetization.” And he asked the founders, “At what point did each of you determine that it was an appropriate time to exit the company? How did you come to that decision? It is almost like creating another child when you build your own company.”

Allegra answered that his partners had self-funded the company and didn’t take salaries for several years. “We actually came to a point where we talked about if should we go out and raise capital, so we could grow even faster. There were even investor bankers that wanted the company to go public.”

Ultimately, said Allegra, there was interest in the company from one of its clients, “so we said, if there is someone who wants to buy us, we’ll do it. It was really that simple to do. In retrospect, we would have done it a little differently, but at the time we didn’t really know any better. It turned out to be a good outcome for us.”

Kyser noted that she is probably different from most entrepreneurs on this question because she gets bored fairly easily and usually wants to leave a company after several years.

“I just thought, ‘We built it and now should move on to the next thing.’ My business didn’t sell for 21 years. I would push my partners every year, asking them if they were selling it. We really had to find a strategic buyer with a complementary business. We had global call centers, and the company that bought us had call centers in the U.S. It was a very good fit.”

Added Cohen, “When we started [TelTech] 10 years ago, it was created by mistake. I had been in retail, and we were contacting customers who wouldn’t pick up their calls because they weren’t paying their bills. We definitely didn’t think about an exit. It was the last thing on our minds.”

When the TelTech founders developed TelAPI, they intended it to be an internal solution for their products, and had no idea about any exit. “When we started TelAPI at the same time we had TelTech, we made a big mistake,” said Cohen. “We assumed that TelAPI was providing services to TelTech. We thought we were in the same business and it would be easy to run both of them simultaneously. And it was a stupid mistake; they couldn’t have been further from each other. One was a B2B business and the other was a B2C.

“We realized we had to pick one. We didn’t have the capacity to manage both efficiently and successfully. We knew that what we really enjoyed doing was mobile apps direct to the consumer. That is what we started doing and what we enjoyed. And we got lucky at that point where we didn’t actually have to go out and hire investment bankers. The companies actually approached us and that’s when we decided to sell—we didn’t have to set it up.”

Previous: Technology Marketing in the Digital Age: How to Use Your Company Videos to Improve Customer Engagement
Next: Opinion: As a Wellness Option, NJ Tech Companies Could Consider Biohacking