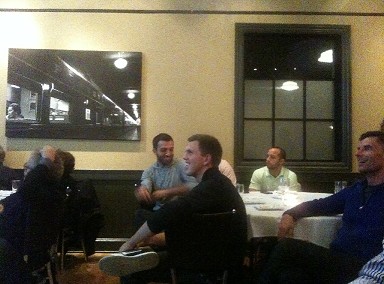 Well before Superstorm Sandy interrupted our ongoing coverage of all things tech in New Jersey, the Montclair Tech and Media Meetup had gathered at Sidecar, the private event facility at Fitzgerald’s 1928 in Glen Ridge.

More than 40 people congregated on Oct. 9, 2012, for a discussion on engaging users by Baristanet founder Debbie Galant, who now heads the NJ News Commons at Montclair State University (which will be sponsoring HackJersey in late January).

Primarily, however, attendees were there to network, and network they did. The evening was hosted by Jay Woodruff, a former editor and now cofounder of Affinity Resource Group, a Montclair-based recruiting firm focused on digital media and technology.

The first order of business: introductions to those in the room, which revealed an interesting mix of tech and media entrepreneurs. Among them was Montclair Tech and Media Meetup cofounder and former New York Times tech editor Saul Hansell, whose past employers include AOL and The Huffington Post. Hansell talked about his new company, SiiTV, which intends to be a source of television news in the post-cable era.

Scott Rosenberg, CEO and founder of midtown-based, venture-backed social TV startup Umami, said his company is developing a system that lets mobile devices become aware of the TV content viewers are watching, so appropriate related content can appear on the second screen.

Todd Unger — currently president of digital at the Daily Racing Form, a 120-year-old newspaper with a thriving digital business that cuts across media, commerce and online wagering — was also in the room.

The founders of the Red Bank-based digital advertising startup Broadstreet Ads, which combines social media and display advertising, talked about their product. It incorporates a company’s social feed into unique, customizable ads.

Galant discussed the beginnings of Baristanet, which started when no one knew what an online hyperlocal news source was. She noted that early on she obtained site users by attending every civic event and parade and bringing giveaways. “I still think there is a lot to be said with face-to-face interactions,” she said, noting that some of her first ads resulted from in-person discussions with Montclair real estate agents.

“What you have to remember is that this was 2004,” Galant said, when Mark Zuckerberg had just started working on Facebook. “We were in there early, and there weren’t a lot of communities around. So when people wanted a place online to talk to each other, they didn’t have Facebook to go to. So that’s my advice: be first in the space. Of course, you’ll have to go back in time!”

The key to a great Twitter following, Galant added, is to engage regularly: “Twitter is a flow of information. At any given time you open up your iPhone and see a river of tweets flowing by. If you put just one tweet out there, that river is gone pretty soon,” and you won’t have reached as many people as you could have.

Particularly interesting was an impromptu discussion on engagement by Nameberry founder Pamela Redmond Satran, also a founder of the group Montclair Editors & Writers. Nameberry lists and researches baby names and pulls in millions of hits monthly. Satran said the site doesn’t know most of its users, since they arrive at the site from organic search.

However, Nameberry has a small group of very engaged users who spend a lot of time conversing on the company’s forums. “We didn’t recruit these people, and we don’t pay them. They just happen to be people who love names and love Nameberry. They call themselves ‘Berries.’ It was a self-created audience that also gets other people engaged in the site,” Satran said.

Nameberry is working on ways to reward those users, who represent only about 3 percent of its traffic — trying to recognize them in some way, give them greater status and make them more prominent on the site. “I don’t even know if this will be important to them,” she said, but they represent a very high level of engagement.

Satran said the company, which launched four years ago, had a lot of deep content on the site from years of work in the field and books written by its founders. Nameberry began to make money last year. “Now we plan to launch with a big media company that will take over the advertising on the site. We have plans to expand beyond advertising. Nameberry has gotten to be a much bigger brand than our old books,” she noted.

A somewhat contentious discussion erupted at the gathering over advertising, web monetization and social media, and NJTechWeekly.com lost track of who was saying what. One attendee asserted that people shouldn’t draw too direct a line between content and advertising: “There’s a $25 billion Internet advertising market right now, and that’s bigger than cable TV; it’s bigger than direct advertising. … The problem is that advertisers want to be associated with good content. … They are spending huge sponsorship dollars, but they might not know what they are getting for it. Social media is not what they want to sponsor.”

Another participant strongly disagreed: “It’s been demonstrated that the social media space is the fastest moving space in advertising. Three businesses just sold this month [October], and they were all in social media advertising. Some think it’s the best tool in all of marketing because it can be measured. Social media is rapidly using metrics that can drill down to site graphics, not just demographics.”

Yet another voice said that advertising plus social media equals Amway, implying that social media advertising is too annoying to work: “You have to engage people organically, and there are a lot of great brands figuring out how to do this.”