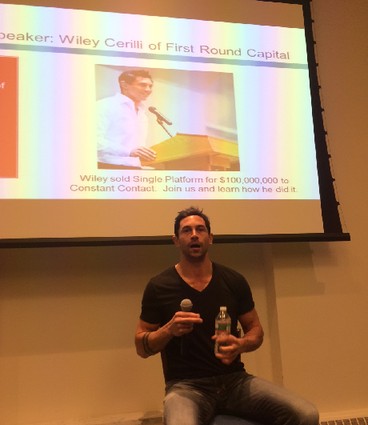 The nearly 100 attendees at the Morris Tech meetup on Feb. 10 were treated to some entrepreneurial wisdom from Wiley Cerilli, who sold SinglePlatform to Constant Contact for $100 million dollars.

He recalled how Seamless Web, a startup he joined sometime after he had dropped out of NYU, didn’t even have the technology built before the company began signing up customers.

The initial idea for Seamless Web was to offer online meal ordering to banks and law firms, and to have those meals charged directly to their clients, thus saving the bankers and lawyers the time it would take to process the meal charges and recovering lost money for the law firms, as attorneys often forgot to charge for the food.

Seamless Web didn’t have any of the technology built when it started selling, Cerilli said.

In the beginning, he said, “we were walking around the law firm, handwriting down orders, faxing them to the office, putting the order on a form that had the Seamless Web logo on it. We’d fax it to the restaurant. The restaurant would see that it was Seamless Web and charge the meals to the credit card number on the form. Then we’d go and pick up the order and deliver it ourselves.”

It was far from a seamless process, Cerilli noted, but he told the story because this is the way many great entrepreneurs begin. They presell to a certain extent. It’s not “if you build it, they will come,” he said, “but if I can presell it, I will build it.”

The company built the technology, and because the technology succeeded in saving money for  banks and law firms, Seamless Web grew quickly, and was bought by Aramark in 2011.

Cerilli had left Seamless in December 2009, and began building his own company, SinglePlatform, which addressed a sore point for bars and restaurants that were on the Web. They needed a place to input all their information — menus, specials, what games they were airing on TV — and they had to update their websites, Facebook profiles, etc. Single Platform wanted to provide a one-stop shop for small businesses update and publish.

Instead of building the software, Cerilli took a PowerPoint deck around to bars and restaurants and pitched the idea. He observed what failed to hold the owners’ interest and what they tended to get excited about, and he refined the deck accordingly. “I wanted to see at what point people were not listening to me and which buzz words they liked,” he told the group.

“At the end of each day, I would redo the deck,” and then go out there and sell it again. While Cerilli believed the idea made good sense for small businesses, he needed to prove it.

“After about three months I got to the point where I could sign up a business a day, and they were willing to pay $395 up front.”  Cerilli said that he didn’t cash the checks. He deposited them only after the technology was built.

He spent $25,000 to develop the technology platform, which he said was really bad. “But it proved the point, and it took the idea to a somewhat functional product.”

From that point forward, Cerilli attempted to hire and train a new salesperson as soon as he could and to make that salesperson cash-flow positive within the first month of working at SinglePlatform.

“I didn’t want my fundraising story to be that I’m raising capital because I need to build a sales team. I wanted it to be that I can hire as many sales people as I want, but I need the money for developers.”

Publicity helped SinglePlatform along. One publication had named it among the top pre-funded startups in New York City, and soon afterwards First Round Capital contacted Cerilli.

The money from the First Round Capital was used to hire a VP of operations, a developer, a VP of sales, and a VP of business development. The business development person was supposed to sign up publishers, who would take the information being input by the small businesses and publish it on their own sites.

Cerilli recalls that no publishers were signing up until he made a breakthrough with Yellow Pages. Once Yellow Pages signed up, Foursquare agreed to work with SinglePlatform, and The New York Times also came along. “We knew if we had the value of the publishers on the site we would get to 100,000 small businesses.”

The company was officially launched in late January 2012, after raising even more money, and soon signed on Google, Yelp, Trip Advisor and others. A profile in Forbes — written by someone who had turned down a sales job offer at SinglePlatform — helped sweeten the deal for investors and publishers.

Cerilli told an amusing story to the attendees about how the company had almost signed a term sheet for additional funding to move toward an IPO, when he was approached by Constant Contact’s business development officer, who said he had been thinking about acquiring SinglePlatform.

When Cerilli asked him how long he had been thinking about it, the Constant Contact guy said about two hours, since he had read the Forbes piece about the company.

Basically, Cerilli was able to name his own terms with Constant Contact, even though during the month he sold the company for $100 million, he had only booked $30,000 in sales. “It seems crazy now,” but the company had already proven its sales model and was ready to scale, he said.

“I see this as an opportunity to get ready for my next business,” he said. “I want to change the world, empower as many people as I possibly can.”

In between this job and reaping the benefits from the sale of SinglePlatform, Cerilli started a camp for boys who have lost a parent or a sibling. He now has multiple camps and is opening one for girls this year.