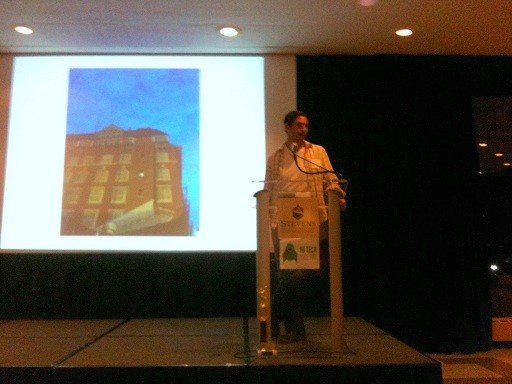 At the October 22, 2012 NJ Tech Meetup in Hoboken, Wiley Cerilli, who sold the tech company SinglePlatform (New York) to Constant Contact for $100 million, gave a humbling talk in which he delved into his entrepreneurial roots.

This time the pitches came from three inaugural-class members of the N.J. accelerator TechLaunch: SeamBLiSS, NuSkool and MMGuardian, whom NJTechWeekly.com covered in the past. MMGuardian ended up being the audience choice award winner.

Many of Cerilli’s lessons came from his father, who died when the speaker was a teen. From him he learned the power of imagination. “There are so many things up against you as an entrepreneur,” he said, “whether its competition or fundraising, or there aren’t the right people on your team or you don’t have the right revenue model. You have to be able to imagine that there is a way this is going to work.”

As an entrepreneur with learning disabilities, Cerilli provided hope to those around him who have similar issues. He read an article that said CEOs with dyslexia are better at assembling teams because they know their weaknesses and surround themselves with people throughout their lives to help them compensate. When they become CEOs, they transfer that skill to assembling a “rock star” team.

Near the end of his talk, Cerilli gave tech entrepreneur attendees solid advice based on his experience thus far. Some of his points are detailed below.

On hiring and firing: