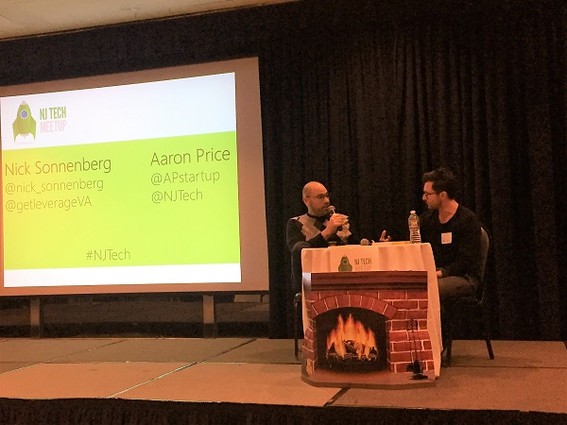 So much for global warming and an early spring! Although Mother Nature, in the form of Winter Storm Stella, didn’t drop the 20 inches of white stuff on New Jersey that some had predicted and feared, it still wreaked enough havoc to force Aaron Price to push NJ Tech Meetup #82 back a few days to be on the safe side.

The last-minute date change evidently caught the local Hoboken pizza delivery service off guard (not to worry, we all got fed eventually and it was delicious, per usual), but the rest of the evening went pretty much as planned.

Three founders of very different startups got the ball rolling with their respective pitches. That evening, an actual cardboard fireplace photo was creatively positioned in front of the table where Price and Leverage (New York) cofounder Nick Sonnenberg were seated, helping to set the mood and warming the audience up for the engaging conversation that followed.

Before the fireside chat commenced, the audience met the panel, which included the founders of: biotech company Neurovation Labs (New York), a diagnostics and treatments startup focused on addressing treat anxiety disorders, in particular PTSD (Post-Traumatic Stress Disorder); Future Moments (Brooklyn, NY), a developer of four apps geared for the mobile entertainment-content creation market; and of Dependable.io, which helps customers keep track of automatic updates to the code that keeps various applications running smoothly and securely. Dependable.io won the Audience Award for “best pitch” of the evening.

Sonnenberg took a somewhat circuitous route when discussing his current role, which is to connect executives to teams of virtual assistants (VAs). His career began in the high-pressure, high-risk, high-reward world of high-frequency algorithmic Wall Street trading.

“We traded huge a volume each day for fractions of pennies in stocks of companies where we generally did not know, nor care, about the fundamentals of what business they were in,” he said.

Today, many of Leverage’s clients are executives of publicly traded or smaller companies, and these professionals pay monthly fees of $199, plus $40 per hour (with accurate partial-hour billing to the fraction of a second). In return, they gain the privilege of 24/7 access to a talented pool of VAs.

“We have a corporate team of more than 100 people. Almost all are located remotely, with only four based here in New York City at our corporate office,” Sonnenberg said. Achieving double-digit monthly sales growth, Leverage is onboarding new customers at a rapid clip, and hiring additional employees at an equally fast pace to keep up with the increased demand for services commensurate with the new business generation.

The organization’s hiring policy is somewhat unique, but seems to fit quite well with the company’s laser focus on enhanced efficiency and optimization. There’s a three-step “semi-automated” and “self-selecting” hiring process. Part one typically eliminates much of the vast pool of potential candidates because the first round requires applicants to upload a three-minute pitch via YouTube stating why they would be a good hire. This strategy helps ensure that it’s primarily highly motivated folks who apply.

“This is a much more efficient use of everyone’s time,” said Sonnenberg. The executive team can get a much quicker feel for a candidate’s viability as a future Leverage employee in just a few minutes, as opposed to the traditional interview process; and it also fits in with Leverage’s corporate ethos of capitalizing on remote workers.

So, what tasks do VAs actually perform for Leverage’s clientele? According to the corporate website, this essentially breaks down into several broad categories, ranging from scheduling logistics to customer management to media and content creation.

“If it’s legal, we pride ourselves on meeting the wide range of client requests. It could be something as simple as making an airline or dinner reservation because our users literally don’t have time to waste spending on hold with a customer service rep.”

Sonnenberg added, “If our members are getting paid the equivalent of a very high hourly rate based on their annual salary, then why wouldn’t they be willing to pay one of Leverage’s VAs at our comparatively reasonable hourly charge?”

What would be an example of a unique service successfully performed by a VA? Here’s one: Because of unforeseen circumstances, a client needed an emergency shipment of refrigerated breast milk delivered to Mexico within 24 hours.

Sonnenberg concluded, “Good and successful startup businesses typically start from solving a ‘personal pain point.'” With Nick, it was initially the difficulties associated with scheduling meetings. This eventually morphed into the realization that there are a lot of tasks that busy execs would be better off having someone else do for them, which, in turn, resulted in the deployment of a full team of VAs. So far, so good, based on their explosive growth, which shows no sign of abating any time soon.

The next NJ Tech Meetup is scheduled for April 17 on the campus of Stevens Institute of Technology. Visit https://www.meetup.com/njtech/ for more info.

Also, the second annual Propelify (previously known as “Propeller”) Innovation Festival will be held on May 18 in Hoboken (rain date May 19). Last year’s inaugural edition was a huge success, attracting 8,000-plus attendees.

About Rob Rinderman – Rob is founder and president of SMC Consulting (www.smcconsulting.biz), a strategic marketing and communications advisory firm.