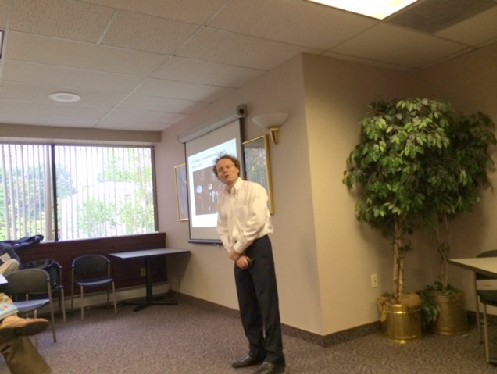 Schoner drew a crowd to the NJTC event that took place at Delta Corporate Services in Parsippany. | Esther Surden

At a New Jersey Technology Council (NJTC) “meet the author” event June 10, 2014, Bernd Schoner gave an entertaining presentation based on his new book, “The Tech Entrepreneur’s Survival Guide: How to Bootstrap Your Startup, Lead Through Tough Times, and Cash In for Success.”

Schoner drew examples from his own startup experience. He cofounded ThingMagic (Woburn, Mass.), a radio-frequency identification (RFID) startup that rode the wave of commercial demand for that technology. The company’s growth slowed, however, when that demand quickly diminished. ThingMagic was sold to Trimble Navigation, a multi-billion dollar technology company in Sunnyvale, Calif.

In the early days of any startup, picking the right team is important, Schoner said. ThingMagic’s was composed of tech gurus from MIT. Having only tech-oriented people on your team is not necessarily the best way to go, said Schoner. Startups need a balance of skills, he noted, adding, “You need one tech guy on your team to found a tech company … but you don’t need four.”

Startups should have a “superstar” on the team, “someone who is extroverted and likes to talk to the media and who attracts investors and excites potential employees,” Schoner said.

New companies need someone who acts as the leader “who people can look to to make decisions,” said Schoner. “It’s great to run a company on consensus, but it isn’t always realistic,” he noted. The person in charge of decision making doesn’t have to be the CEO or be compensated more than anyone else, but startup team members do need someone to help break up logjams, he said.

Companies also need a “sales animal,” said Schoner. Tech companies in particular are in love with their product and need another perspective: that of the person who asks, “If we make this, can we actually sell it?” The whole process has to be geared toward commercialization, he added.

“It’s always good to have an industry veteran on the team,” Schoner said. While young startup founders have the advantage of not being tainted by how things were done beforehand — and it’s very important to have younger people to bring that freshness to the problem you are trying to solve — you need someone who knows how things are typically done in the industry, he said. “It’s not necessary or feasible to reinvent the wheel,” he noted.

Finally, Schoner suggested, all startups should hire a part-time CFO. Managing finances for a startup — especially when the company is trying to line up financing without diluting itself, has no money in the bank and doesn’t know where payroll is coming from — is a tricky undertaking, he said.

When a startup is putting together its team, an important individual quality to consider is the ability to deal with uncertainty, Schoner said. You never really know where a startup is going, he explained, and that uncertainty is difficult for many people.

According to Schoner, there is no need for anyone to drop out of college to become a successful high-tech entrepreneur. Most founders start their companies 15 years after obtaining their terminal degree, he said. “There is a nice bell curve around the late 30s or [at age] 40 … Anyone can do it,” he added.

ThingMagic funded itself by bootstrapping during its early years. “We started with ‘paid for’ customer projects before we even incorporated. A guy [client] gave us his credit card as compensation for project work, and we started buying electronic test equipment,” Schoner recalled.

“Along the way we tried to build up intellectual property [IP] wherever we could, and ultimately that IP was very important when we scaled the company and tried to put a price tag on it. But we funded it for five years through private customers,” he noted.

After discussing accelerators, crowdfunding, angel funding and VCs, Schoner said he feels revenue is the best option for funding an early-stage company. It doesn’t have to be paid back, keeps you honest, helps if you need VC funding later and takes some uncertainty out of the startup equation, he added.

Revenue is ultimately what the startup will be evaluated on by VCs. They will look at the value of the company and “will not be impressed by how much money you’ve been able to raise,” he said.

Schoner recalled that ThingMagic had been forced to take VC financing when the retail supply chain became interested in RFID, Wal-Mart mandated the use of the technology and well-financed competitors began to invade the space. “For us it was a blessing and a curse. The opportunity attracted capital,” he said, but the company attracted competitors.

“Our bootstrapping model didn’t work. We needed capital to scale and develop the technology further,” Schoner said. The company was valued at $50 million and took $20 million in capital.

“Everyone was excited. The financial pressure was off,” he recalled. Analysts predicted great growth in the RFID market. However, by 2006, he said, “we realized it wasn’t happening. It was too late to reverse course. The market was growing at 10 to 20 percent.” Lesson learned: don’t trust analysts when it comes to making a significant decision like whether to take venture capital.

When the RFID bubble burst in 2006–2009, ThingMagic had to return to the capital markets many times but never returned to its original valuation. So every investment round after the first one was a down round.

When you are desperate for money, your existing investors are your best friends, Schoner said. They have already invested funds and want to get their investment back. If they let you go bankrupt, they won’t see any of the investment, he noted. Moreover, he said, professional VC funds retain money in the fund to support portfolio companies down the road when they need more cash.

If you can’t convince your investors to continue supporting you, your first priority is to protect the team, Schoner said. You must protect all the people who are with the company and willing to stay put to help it move forward. Your concern cannot be the common shareholders who have left, even if they have significant equity. You don’t want to harm them, but you want to do everything possible to compensate the company people who are still there, he said.

When ThingMagic’s founders got to this point, they started the process of selling the company. Remember, said Schoner, you can’t just take the money and run. Acquiring companies require you to stay on and help run the company as they integrate it into their business. Also, it can take a long time to sell a company.

Schoner concluded his talk with guidelines for determining a good time to sell a company. First, he said, company founders have a series of untested hypotheses. It’s hard to sell a company when one of your big hypotheses proves incorrect, he said. So he suggested selling a company right before those inflection points.

For example, consider exiting preproduct, because developing hardware can be tedious, he said. Consider selling prefunding, so you can take the cash out of the company. Another good time to sell is while the company is still prerevenue, because going to market is a difficult process that most founders underestimate. Finally, Schoner said, it’s good to exit preprofit, when it looks like a product is about to take off. Someone else can take the risk and earn the reward of making the product profitable.