Home » News » At VANJ Meeting, VC Svrluga Explains What Gets His Wallet out 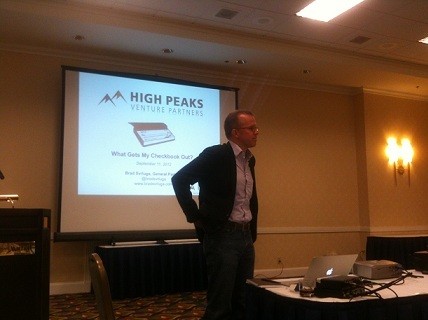 Brad Svrgula of High Peaks Venture Partners discusses what gets his wallet out. | Esther Surden

Brad Svrluga, general partner at High Peaks Venture Partners (New York), revealed to attendees at the Venture Association of New Jersey (VANJ) September 11, 2012 Whippany meeting the secrets to getting funding from his company or, in layman’s terms, “what gets my wallet out.”

High Peak funds companies in software, mobile and the Internet, Svrluga said, and will look at healthcare IT, but it has left the medical devices market. The firm writes checks from $100,000 to $500,000 and will bring others in on rounds of up to about $1.5 million, he added.

Svrluga said he believes the time period we are currently in is even more exciting than 1995 to 1998 (preceding the Internet bubble burst). Smartphone penetration has reached 50 percent, and one billion people in the world use some kind of social network.

Svrluga noted that the cost of launching and operating an Internet business is 90 percent lower than it was 10 years ago. “Nobody is buying servers today. … They are dialing up Amazon and asking for the exact portion of one server they need and then dialing it back down when they don’t need it. Nobody is writing software from the bottom layers of the stack,” he said.

This is enormously more efficient and flexible than what the early pioneers in this field had to do, he noted.

Svrluga said he looks for simple, elegant, very lean applications: “You don’t need to create a big, noisy site. Google is the only company from the early Internet [days] that figured out the value of being simple and elegant, but the smartphone has driven other developers to that realization.”

An example of the kind of company High Peaks likes to fund is Routehappy, a social review site for air travel that lets customers select flights based on the availability of options like Wi-Fi, paying more for extra legroom and flying in a newer plane with entertainment choices. Although a great consumer, this company could be attractive for the data it is mining about consumer choices, Svrluga said.

The firm FieldLens, which offers a communications platform for the construction industry, has also caught Svrluga’s eye. In that industry, processes like incident reporting are still managed by construction managers walking around with clipboards. They can now use mobile devices, take pictures of incidents and send the material directly to a company’s computer. This becomes an auditable platform that will make both the company’s and its insurance carrier’s job easier.

Markets have to be really big to obtain institutional investors’ attention, Svrluga said. Products have to be orders of magnitude better, faster and cheaper than they are today, he noted. “You are trying to change human behavior with this product, and if it’s only a little bit better, people won’t change.” He added, “We mentally prepare ourselves and aren’t frustrated if it takes a company five years to pay off.”

Svrluga had some specific advice for investors:

At the end of the day, Svrluga said, it’s all about you, not the product or market. Your company will succeed because you are that good or fail because the team you have assembled is not creative and flexible.