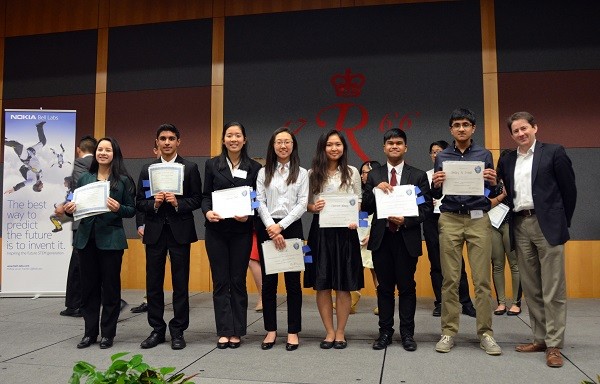 The Nokia Bell Labs NJRSF is a high school science competition in which students present a wide variety of projects in science, technology, engineering and math (STEM). The fair takes place every year at Rutgers, and showcases the work of students from ten counties in central and northern New Jersey: Bergen, Essex, Hunterdon, Middlesex, Morris, Passaic, Somerset, Sussex, Union and Warren.

According to Marcus Weldon, CTO of Nokia and president of Bell Labs (Murray Hill),  the fair originated in the fall of 1983 as an activity of the Murray Hill Science Education Club (MHSEC) at AT&T Bell Labs. Weldon said that it felt right for his company, which prizes innovation, to sponsor the fair after a 20 year hiatus and several ownership changes and encourage innovation among the youth of New Jersey. He noted that many former Bell Labs employees have been giving their time to the fair.

Since the time when AT&T Bell Labs first started sponsoring the science fair, the organizing committee for the fair has expanded to include participants from other companies, as well as from academia and the community. The goal of the fair is to promote, support and reward the students and teachers in the North Jersey region in their research and educational endeavors. In 1996, the MHSEC ceased to exist as an independent entity, but the association that later became the NJRSF lives on as a legacy of the club.

Most of the projects are investigative in nature, posing and attempting to answer some question or problem, either through experimentation and design or in a theoretical sense. Projects in many STEM areas are eligible.

Besides contributing financial support, Nokia Bell Labs contributed judges for the this year’s fair. “We hope that through our future involvement we’ll be able to help students who have projects we can support, either through providing access to specialized equipment” or other kinds of help, Weldon told NJTechWeekly.com.

·       In the field of animal sciences, Catherine Chen, of Somerset County Vocational & Technical High School, in Bridgewater: The Effects of Heart-Specific Downregulation of Histone Deacetylase, Rpd3, on Longevity.

·       In the field of bioinformatics, Jiwoo Lee of the Academy for Medical Science Technology, in Hackensack: Biostatistical Analysis of Huntington’s Disease Mutation Frequency and Repeat Instability.

·       In the field of biomedical science, Clairisse Whang, of the Academy for Medical Science Technology: Effect of Oleic Acid on Intracellular Calcium through Liposome Accumulation.

·       In the field of cancer research, John Lozada of Bergen County Academies, in Hackensack: Exploiting Migration and Metabolism: A Novel Approach to Metastatic Cancers.