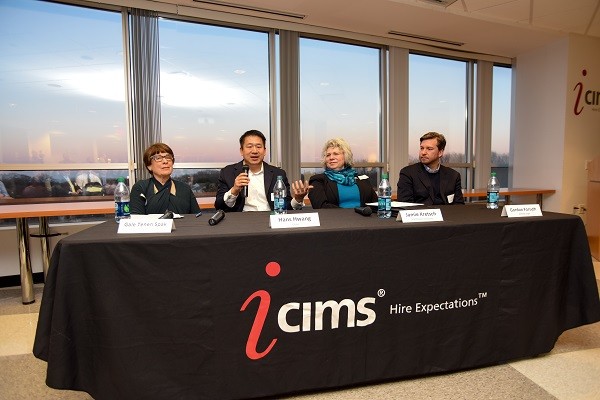 Retaining tech jobs in central New Jersey and attracting more tech companies to the area were the topics on the minds of a panel of experts and some politicians who came to iCIMS headquarters, in Matawan, on Feb. 18.

In his introductory remarks, Senator Thomas H. Kean Jr. said that one of New Jersey’s problems in attracting tech-savvy people is that the state’s brand is diluted. “A number of other states have a consistent brand across governors.” Their state governments change every four to eight years, but each of these states has a brand that doesn’t change, no matter who is in charge.

The branding issue came up again later in the evening, when Gordon Forsyth, brand engagement lead at DefinedLogic (Red Bank), noted that Monmouth county is a great place to live and work, has a world-class university, and has towns like Red Bank, which is considered by some to be “Wall Street South.” Then he asked, “So how do we get the word out?”

Prior to the panel discussion, Jeff Stoller, assistant commissioner of the Office of Research & Information, New Jersey’s Department of Labor and Workforce Development, provided some “color” with his description of the state of tech in New Jersey. He said that statistics prove that tech is a huge part of the job landscape in the Garden State.

Our tech industry involves companies and startups, but also IT people and other tech-savvy individuals in manufacturing and other pursuits, who make up the infrastructure of almost every business today, he said. “Technology is playing a role in the future of all of our industries.”

At last count, Stoller said, there were 360,000 jobs in the technology cluster in New Jersey, or about 11 percent of all of our private employment in the state. “The average salary is $114,000 … almost twice the average for all the other industries in New Jersey. So instead of $60,000 it’s $114,000.” Looking back over the past 10 years, the average salaries for tech industries went up 37 percent, he added.

“So we are talking very serious lucrative employment that could really open doors and a number of career paths, not just for the job seekers but the students and the academics and our other partners there.” More than 50 percent of the industry is in Morris, Bergen, Middlesex, Somerset and Mercer counties, he noted, but there is a presence in every county in the state.

To fill these jobs, New Jersey has to create a pipeline of applicants and reach out to those who have been traditionally ignored by the industry, including women. Stoller noted that females now comprise 47 percent of the workforce across all industries in New Jersey, and 51 percent across all non-STEM jobs.

However, they are only 35 percent of the tech workforce in this state. “So it just seems that, whatever your area of specialty, there is a whole group of very talented people, perhaps not from the traditional paths, that have come to the industry in the past. That is part of the answer, too. And we feel that this is something that would add value to the employers as well.”

During the panel discussion, the moderator, Ronald Kasner, CFO of iCIMS, asked Cisco’s Hans Hwang what else besides the growing tax incentives could New Jersey do to keep tech companies here and attract other tech companies to the state. Cisco employs about 600 people in New Jersey, with a large group in Iselin.

“When tech companies like Cisco look for where to source talent and locate campuses, it’s all about how easy it is to get access to the engineering talent they need,” he responded. That’s where having relationships with universities and the chance to recruit the talent coming out of those universities are the key differentiators.

He also noted that, when Cisco moves in, competitors and companies in Cisco’s ecosystem tend to collocate in the area. However, if you look at those areas, he said, “they all share access to universities that graduate technical talent that Cisco can get access to.”

Monmouth University’s Jamie Kretsch, specialist professor and department chair, Department of Computer Science and Software Engineering, said that the relationship between industry and universities has to be symbiotic.

“Industry can’t manage if we’re not graduating the students to come out and do their jobs successfully,” but the universities need the businesses to work with the students and “give them opportunities for internships.” About the students, she said, “They need to know what it’s like in the workforce … what skills are to be expected of them, even proper behavior in a business.” She also wants businesses to come in and mentor students and give talks on new technologies.

Monmouth University, which is located in West Long Branch, has established an advisory board for the Computer Science and Software Engineering Department. That board helps the department  make sure that it’s meeting its objectives regarding certifications and is providing the students with exposure to companies. “I’m also trying to increase the hiring of adjuncts from businesses … I want experts in your field to come in and work with the students,” said Kretsch.

Asked what NJIT (Newark) is doing to increase the number and caliber of the students coming out of that institution, Gale Tenen Spak, associate vice president of continuing and distance education,  told the group about NJIT’s many courses and certificates, and about its Ph.D. programs.

She described the senior capstone program in computer science. Every year, seven companies get to bid on a team of NJIT students to work on solving their real-world IT problems. She also explained that, as a member of the Association of Public and Land-grant Universities, NJIT has started to benchmark how it’s working with companies in their own environments.

Forsyth said that he was looking for folks who could cooperate with DefinedLogic, and that a key differentiator of the employees who “make it” at his company is the ability to “come together, collaborate and create technological solutions that move companies forward.”

He added that DefinedLogic is doing something unique among tech companies in New Jersey. “Over the summer, we brought together a group of students from The College of New Jersey  (Ewing) and Monmouth University” to work with company staff, in an effort  called “Studio Red Bank.”

“You can call it an accelerator or incubator, but there is something different about it,” he said. “It is a full give-back model. We aren’t looking for equity. We’re just helping aspiring entrepreneurs take an idea from nowhere essentially and be in a situation where they can present it via Shark Tank or something similar.” Forsyth added that the idea had taken off and that so far 20 student entrepreneurs  have applied for a future session.