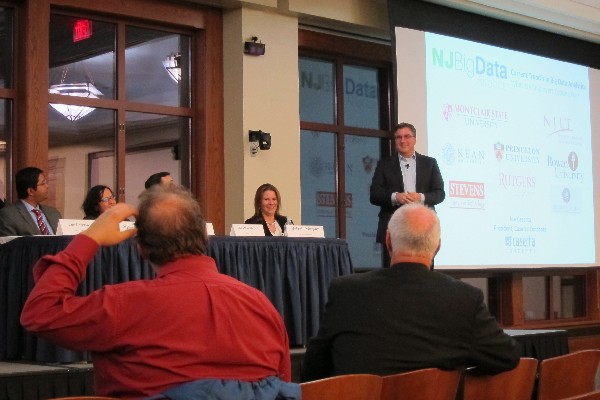 At the Montclair Entrepreneurs Meetup event on Dec. 2, Joe Caserta, president and CEO of big data company Caserta Concepts (New York), discussed specific jobs in the field of big data, including their requirements. The meeting was held in conjunction with the
Information & Operations Management Department at Montclair State University’s School of Business.

This field is growing in New Jersey, thanks in part to people like the discussion’s moderator, Dr. Rashmi Jain. A representative of the New Jersey Big Data Alliance, Jain is also chair of the Department of Information & Operations Management at Montclair State University’s School of Business.

The NJBDA consists of representatives from the state’s top educational institutions, who collaborate with groups like the New Jersey Economic Development Authority and the Institute of Electrical and Electronics Engineers.

NJBDA representatives are actively building awareness of big data computing equipment, including large mainframes that exist throughout the state. They also encourage the sharing of such equipment among universities, businesses and government entities, contributing to a favorable climate for local entrepreneurs and IT workers who want to work in big data.

Additionally, the demand for big data professionals is expected to increase across industries, contributing to what Jain called “the big data economy.” And according to Caserta, “There’s no specific industry that’s going to be ‘more’ big data than the other. Eventually everyone will become big data.”

To help people take advantage of such opportunities, Caserta showed a slide listing the eight most in-demand big data jobs. These jobs were:

Caserta said that people working in these jobs must learn Hadoop, which can be downloaded for free from Cloudera and Hortonworks.

He added that aspiring big data professionals should also understand:

People have already managed to start working in big data by educating themselves through such resources. For example, Caserta said that he had hired a man with no computer science background. This man, on his own time, “went to the Cloudera website, downloaded some videos and downloaded some literature, taught himself Hadoop, and became Hadoop-certified.”

Caserta also mentioned another employee who has been working at his company for 15 years. “He’s probably the best ETL developer I’ve ever had on my staff. He was painting houses when I hired him. But he was going to school on his own time, and he was getting a degree in advanced mathematics.”

Even though the employee couldn’t write code, Caserta said, “He was able to solve problems logically that other people just couldn’t solve. He’s a genius, he just didn’t know it.”

This anecdote demonstrates why Caserta values intelligence and creativity on his staff. He explained that “Once you have that type of brain, learning code is easy.”