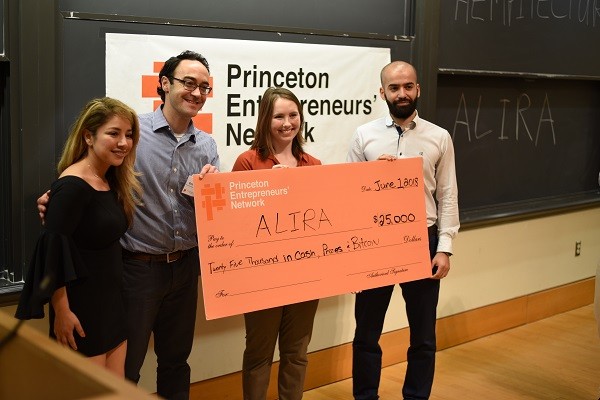 “If one of these houses lights on fire, am I going to catch a buzz?” an investor asked Tommy Gibbons in a crowded lecture hall at Princeton University earlier this month.

Gibbons had heard the question a dozen times while promoting the startup construction company he cofounded, Hempitecture (Ketchum, Idaho), and the building material it makes: something called “hempcrete,” which is like concrete but is made of limestone and hemp.

“No, because hemp’s fire resistant,’’ Gibbons answered. And unlike that other plant in the cannabis family, marijuana, hemp has only traces of tetrahydrocannabinol (THC), the compound that gets users high, he said. “The ingredients in hemp won’t get you high.”

The 27-year-old Summit resident was one of three finalists selected from a pool of more than 30 rival startups at the 21st Annual Princeton Entrepreneurs’ Network Startup Conference and Competition. In front of Gibbons sat professors, investors and alumni, as well as the other competitors. The investor who asked Gibbons that question was Gibbons’ former college roommate.

The top prize: $5,000 in cash, 1 Bitcoin worth $6,480 (price at publication), 1 Basis, $10,000 credit for Amazon Web Services and an all-expense-paid trip to Los Angeles and San Francisco for six organized meeting with top venture capitalists.

There were plenty of bright startups at the competition, from a precise GPS system for indoor environments, such as supermarkets, to a scalpel that cuts in a spherical shape, to be used in lumpectomies and cyst removals, fully eliminating tumors.

When the handshakes and excited morning pitches at the university’s Friend Center were finished, Hempitecture took second place, winning the People’s Choice award and a $1,000 check.

Taking top honors was Alira Infrared Biosensing, a company based at Princeton University that has been developing a noninvasive glucose sensor that uses mid-infrared laser spectroscopy to the check diabetics’ glucose levels.

We’re really excited to bring this from Princeton to the public,” said CEO Alexandra Werth, a doctoral student in electrical engineering.

Coming in third place was Lithero (Philadelphia, Penn.), an artificial intelligence (AI) startup that is working on the challenge of biopharmaceutical marketing compliance. This time-consuming and expensive process costs biopharmaceutical and medical device companies an estimated $20 billion globally, according to the company.

Through the Lithero Artificial Review Assistant (LARA), an AI platform, the startup enables companies to operate more efficiently. The goal is to provide savings that can be used to benefit patients through increased research investments and lower drug prices, said Nyron S. Burke, cofounder and CEO.

Princeton remains one of the top-ranked universities for producing startup founders who go on to raise money from investors. That’s according to a report by PitchBook, a Seattle-based financial data company that tracks public and private equity markets, including venture capital, private equity and mergers and acquisitions.

By the numbers, over the 10-year period ending in 2016, Princeton ranked 13th in the nation, with 408 entrepreneurs, 382 companies and $7 billion in capital raised, says the report.

Princeton also ranked 13th when it came to the number of alumni-founded startups that raised $1 million or more between August 2016 and August 2017. Princeton had 49, according to Crunchbase which reports on industry trends, investments and news about global companies.

While many startups opt for New York City addresses, Werth said that Alira is staying in New Jersey. She said the award money will put to good use, helping to pay for a $500,000 study that will be needed before her group seeks FDA approval. The group calls its device the “Glucospere.”

The group has not formed a company yet, but will most likely do so in the next 6 months, she said, noting, “Princeton University owns the IP and we have two patents pending.”

Werth said that she had been working for the past four years at the laboratory of Professor Claire Gmachl, developing the noninvasive, mid-infrared glucose sensor for diabetes management. The sensor includes a laser that measures glucose in the dermis layer of the skin, and Werth noted that it will ultimately be worn by diabetes patients.

There are some 29.1 million Americans and 442 million people worldwide who have diabetes.

The device would replace the painful finger-prick method for getting blood samples. “This is not something anyone should do. But this is the case for hundreds of millions of people who suffer from diabetes throughout the world. Having some noninvasive approach could drastically improve the quality of life for all these people. And that is what we are hoping to do,” Werth said.

Gibbons was equally as excited by winning the People’s Choice award. The 2013 Princeton graduate met his business partner, Matthew Mead, during high school, at the  Delbarton School, in Morristown.

Since the competition, the two have gone back to work, building a house in Bellingham, Washington. It’s the first hempcrete remodel/addition ? and the largest hempcrete construction site ? in America, said Gibbons.

“Hempcrete is a carbon-negative, rapidly renewable, energy-efficient insulator. It has great acoustics. It’s pest resistant, mold resistant and fire resistant,” he said of the building material, which is derived from limestone and the woody core fiber of industrial hemp stalks.

The United States prohibits the growth of industrial hemp, although 39 states have passed pro-hemp legislation. The Hemp Farming Act of 2018, if passed, would remove federal roadblocks against the cultivation of industrial hemp, comprising the non-drug agricultural varieties of cannabis. Until then, construction companies like Hempitecture will have to import it, according to Gibbons.

“We got ours from the Netherlands, and the shipping cost more than the hemp itself,” he said, noting that he’s optimistic that more minds can and will be changed. Just look what he had accomplished at the competition, he said.

“We were starting with something the audience never heard of, and we were able to make them believers in hempcrete in one afternoon. And that speaks to the need and demand for our service.”