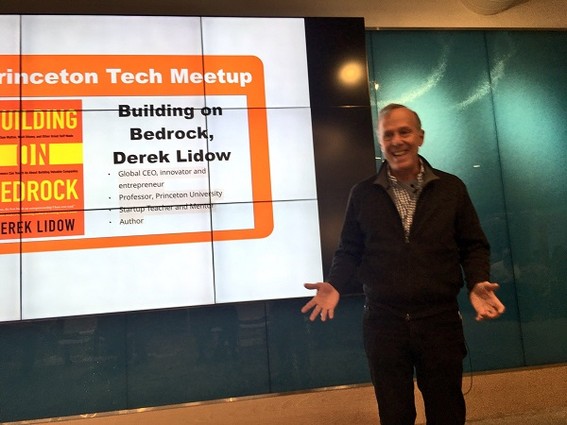 We are overemphasizing the high-risk model of entrepreneurship in our society, and thus creating a lot of business failures in our startup culture, said Derek Lidow, Princeton University entrepreneurship specialist and lecturer, at a recent Princeton Tech Meetup event.

Lidow, who was a successful entrepreneur in his own right, discussed his research on entrepreneurship, which led to his book “Building on Bedrock: What Sam Walton, Walt Disney, and Other Great Self-Made Entrepreneurs Can Teach Us About Building Valuable Companies.”

Most entrepreneurs don’t realize that only 1,400 new companies get venture funding each year, and that number has been flat for 20 years. Angel funding has risen in the last 15 or 20 years, and angel investors fund about 70,000 companies annually, but most of those companies fail to find follow-on funding, he told the audience.

“We have lost sight of some fundamental principles of entrepreneurship, and that’s making it a lot harder to achieve profitability. …We have been too dismissive of the need for profitability in our companies,” he said.

There are two types of entrepreneurship, according to Lidow. “High-risk” is one of them. High-risk entrepreneurs follow the Silicon Valley model: shoot for the moon using other people’s money. This is entrepreneurship based on maximizing financial gain, using failure as a learning experience, and delaying profitability to maximize growth, he said. There are significant risks to this strategy; but for some businesses, those risks make sense.

Only certain businesses thrive under high-risk entrepreneurship, he said. Right now, the major investments of high-risk businesses are in Software as a Service (SaaS), biotech, ecommerce, and artificial intelligence (AI), which together get about 85 percent of all VC investment.

The other type of entrepreneurship is what Lidow calls “bedrock.” Of all the companies that succeed, 99 percent fall into this category, he told the meetup. “They create 90 percent of all the value created by startups.”

Bedrock entrepreneurship is focused on minimizing risks, maximizing the chances of success and getting a profitable return. “You do that by trying to achieve profitability as quickly as possible, and using those profits to reinvest in the company and/or getting loans to grow the company.”

High-risk companies grow faster because they have more investment capital at their beck and call, he said. Yet both high-risk and bedrock companies top off at the same ultimate revenues and profits, he noted.

Earlier in the meeting, Lidow started the conversation by discussing his own personal history. “I was making a product I knew I would buy, and I knew some of my fellow CEOs would buy it, too. I felt we had a good product, I knew nobody else was making it, so I put my money where my mouth was and started this company.

“I had a great reputation, I was known in the industry, I could call anyone up and they would take my call. … Great people wanted to work for me.” Yet starting a company was still an enormously challenging task, he said.

Lidow was happy that it turned out well enough for Princeton University to ask him to help expand the entrepreneurship program there. “I didn’t know, even after it had ended successfully, what about that experience I had done properly and where I had blundered.” That’s why he began to research the subject.

Entrepreneurship is actually on the decline in our country, he said. “The press would have you think otherwise, that this is a boom time for entrepreneurship, but the facts are that fewer companies are started today than any time in the last 20 years.” It used to be that, in the U.S., you could count on 800,000 new companies being started each year, but that number is down to 600,000, he said.

There are currently 19.8 million aspiring or nascent entrepreneurs in the U.S., people who say they are dedicated to starting a company, said Lidow. But the failure rate for companies is actually going up.