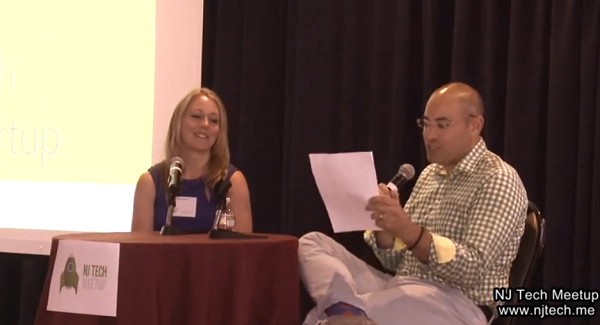 Alyson Shontell recalled the early days of Business Insider, when she was employee number six, at the July 23 NJ Tech Meetup, which took place at Stevens Institute of Technology, in Hoboken.

She spoke about the adventure of joining a website startup after college, how entrepreneurs can get press, and about the volatile media landscape.

In a question-and-answer session with NJ Tech Meetup founder Aaron Price, Shontell described how she had graduated from Syracuse’s S.I. Newhouse School of Public Communications and asked her mentor, Julie Hansen, about working at Condé Nast.

“She said, ‘No, no, no, don’t go into print. That’s foolish. All the print jobs are declining, digital is on the rise. Come work with me. It’s a startup. We only have five people and we just raised a million dollars.’”

That startup now has around 80 million unique visitors every month, Hansen is the company’s president and chief operating officer, and Shontell is one of its most visible writers as the deputy editor for tech, writing long-form stories such as “THE TECH ‘TITANIC’: How red-hot startup Fab raised $330 million and then went bust” and “The Dark Side Of Facebook, Where People Lie, Steal, And Make Millions,” and appearing on ABC, CNN and other television networks.

Speaking to the entrepreneurs in the audience, Shontell acknowledged that getting press is important, but she said that if you’re looking to have your name go viral, think ahead.

“The first thing to think about is to be really strategic,” she explained. “Sometimes [press] can be more harmful for your startup than it can be good. So many startups end up pivoting, and then you can end up looking foolish because you pitched this thing in the press that didn’t work out six months later.”

As a journalist, Shontell acknowledged the difficulty of getting a reporter’s attention. She said that she receives hundreds of story pitches daily, and has to delete many of the emails without reading them.

“You can tell pretty quickly from the subject line if someone is just sending a mass pitch to a bunch of reporters or if they have no idea who they’re pitching,” she said. “They may just feel like they need to be pitching or just don’t really know what you cover. Those are pretty easy to send to the trash.”

The best way to escape being dumped, said Shontell, is to nurture a relationship with a reporter.

“If you definitely want press, like a lot of things in life it is who you know and referrals. Try to scramble to find a connection to the reporter you want. Study the reporter, know what they’ve written recently and know what might be of interest.”

While she noted that PR firms can be effective, Shontell believes that entrepreneurs should consider making their own press pitches. “A personal touch goes a long way,” she said. “There’s no one more passionate to tell the story. You can relay it to someone else, but they just won’t have the same enthusiasm or vision.”

Shontell also suggested pitching something with a compelling angle. “Find what people would want to read,” she said. “Think, what’s a story my friends would be excited to read even if they’re not super into the tech world? When I write a story, I think, what would my parents want to read about even though they’re not on Facebook? What would my friends who work in finance but don’t have an interest in startups, what would they read? How can I spin it for them?”

That compelling angle is usually a human interest story. “People always want to root for an underdog,” she said. “ They want someone to succeed; they want to know how you got to where you are and how maybe they could do it too. Entrepreneurship is all very aspirational and inspirational. I think everyone wants to follow a dream and have it come true. Often that’s the most interesting bit of it.”

Shontell, who lives in Hoboken, also knows about that human side of startups from her husband, Matt Lombardi, who founded the sports site College Spun. She said that their relationship has shaped her understanding of the stories she covers.

“I think it’s been really good for me to live vicariously through him,” she said. “I’ve seen the struggles, the emotional roller coaster up front. It was in our apartment before it was in an office.”

And even though Business Insider now has over 350 employees, she still feels that she’s working for a startup. “We’re still young, and scrappy and innovative,” she said. “We still haven’t made it yet, so were still hungry.”

Shontell also spoke about the evolving news business, which has seen traditional outlets like print newspapers falling and new players rising, such as leaner startups like Business Insider, BuzzFeed, Vox, Vice and others.

“The media industry is kind of in a crazy place right now,” she said. “The last few years, there’s been a renewed faith in media. People are starting to see that maybe the model isn’t so bad. However, it’s also incredibly hard. We’re starting to see a lot of layoffs at the bigger print brands, we’re starting to see media consolidation, with the smaller startups that just haven’t been able to figure out how to monetize well, with ad rates plummeting.”

[A video of the fireside chat by Jay Treble of NJ.org can be found here.]