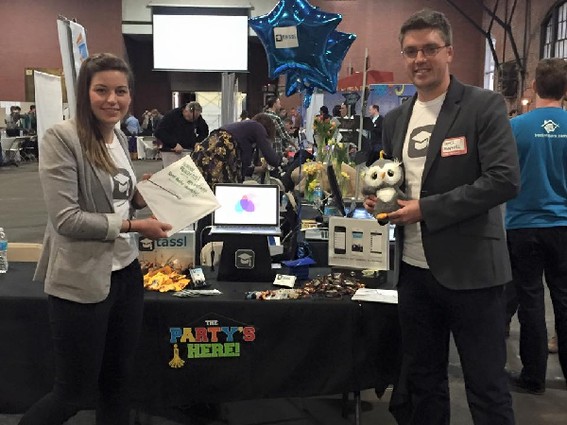 CAMDEN –What’s a girl to do when she has an idea on how to keep former students connected to their university or college?

She creates her own app that does just that.

Melissa Schipke is the co-founder of Tassl, an independent company providing a one-stop shop for everything related to your college or university.

Schipke graduated from Penn State University in 2009 and spent the first five years of her career with a Fortune 200 company while completing her MBA through Rowan University.

As an active alumni, she found it hard to find out what the Penn State community in Philadelphia was doing.

“For me as an alumni to go find out the sports scores, what’s going on in the Penn State community in Philly, it seemed like I had to go to 25 different websites for all of the information I wanted,” she said. “So Tassl, is the idea of making engagement easy for alum, while making tracking of that engagement easy for universities and colleges.”

After returning to Penn State to speak to classes and work in alumni task forces, Schipke was determined to find a better way to engage alumni.

“I wanted to create an engagement platform that was more than just asking alumni for donations,” she said. “I knew that alumni would self-report their involvement if they had an ultimate tool to do it, so I thought to myself, ‘somebody’s got to come up with this!”

Luckily for Schipke, she had a friend who was married to a technical savant who could help get her company off the ground.

Maxwell had worked for a variety of companies in technology before starting his own consulting company.

“I knew working with Melissa would be a perfect match,” he said. “I liked her idea and the passion she showed as being an entrepreneur.”

Schipke knew that with her business savvy and Maxwell’s tech skills, Tassl would be a dream come true.

From their initial meeting, Schipke and Maxwell never looked back as they turned a cubicle inside Camden CoLab into the new home of Tassl.

The rest of this story can be found on the Courier-Post Online site here: Camden startup focuses on alumni engagement. Reach Matt Flowers at (267)-671-8654 or at mflowers@gannett.com. Follow him on Twitter @CP_MFlowers.