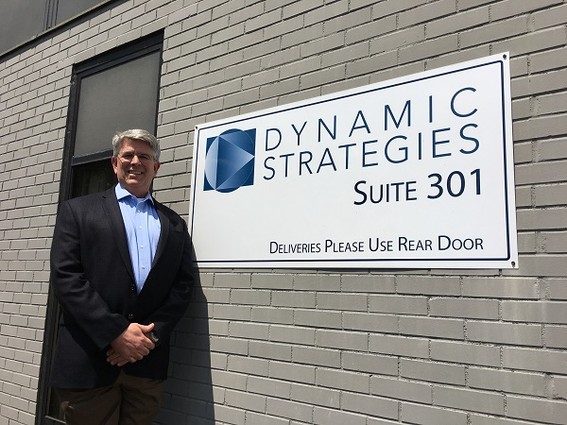 Hahn took over as the Cranbury-based company’s CEO in 2016, after a group of investors bought out the company. Hahn has a startup background and describes himself as a “loving the startup world.”

Hahn’s road to Dynamic Strategies started in his home state of California. In 1998 he moved to New Jersey with a quasi-start up that was relocating to Cranbury, NJ, and helped create a new R&D facility. He then moved on to a Sarnoff startup. As he says, “We went through the whole dot.com bubble and burst even though we weren’t a dot com. We spent about $50 million and didn’t get much for it, although the company is still in business today.”

After five years with that company, Hahn joined another “quasi-startup,” one that had moved to New Jersey from Ithaca, New York; but after another few years, the “parent company closed us because they lost a drug.” Next, Hahn worked at a “nutraceutical” startup.

Entrepreneurship is in the DNA

Entrepreneurship is in Hahn’s DNA, with both parents owning businesses when he was growing up. His mother owned a real estate office and his father started multiple businesses. “Because of growing up in that environment, every time an opportunity would come my way, I would begin writing a business plan to see if it was a viable opportunity.” When this opportunity came, Glenn Kupsch, the past CIO of Matheson (a $1.2 billion specialty gas company) and the leader of the investor team, asked him to write a business plan. “Every time I had written a business plan in the past, I knew the business wasn’t viable. This time, every time I thought it wasn’t viable, someone would help me figure out how it actually was viable.”

Dynamic Strategies has a long history. It was founded by four IT consultants in 1997 (one dropped out after a year) who were working for Rhône-Poulenc, a French chemical and pharmaceutical company that had operations in New Jersey. The consultants formed their own company with the idea that they could get a managed services contract from their former employer. They bid on their first contract in 1999 and, while not getting the whole thing, they did get a piece of it. Three years later, they bid again and received a bit more of the business.  In 2003, after Rhône-Poulenc had morphed into Rhodia (chemical) and Aventis (pharmaceutical), the team bid for Rhodia’s work and got it, winning the contract away from IBM.

“That lasted until 2013, when Rhodia was bought by Solvay, a Belgian chemical company, which had its own managed services provider. We still do a lot of work for them,” but not as much they once did.

“We formed a new management team. We now have a board of directors. We have serious goals about growing the company to either sell or IPO in the next five years. In other words, we are a 20-year old startup!” Hahn said.

Hahn agrees with Kupsch’s view that the one essential business element Dynamic Strategies was missing was a good sales and marketing person. As it happened, Kupsch had someone in mind who had experience in sales to the enterprise, and Hahn liked his pick.

“He is building a whole new sales and marketing team that we’ve never had. In 2016, while partially owned by the old owner and the new owners, we landed seven clients. Prior to that, we had never landed one new client a year. This year we are on track to hit 14 to 18. And those are all different-sized companies. We are really changing into a growth company, which is exciting to see happen!”

Hahn is happy with life in his adopted state, and isn’t bothered by the tax situation here.  He joked that he had built much of his career in California, another state known for its high taxes, so New Jersey doesn’t look so bad.

He added that New Jersey has been good to him, and that he is working with the New Jersey Economic Development Authority (EDA) to see if his company can get some help. “We are looking to hire some people, but we also have some contracts that need to close in order to hire. We understand that there is some help the state might be able to give us to hire the people in advance, so we can be prepared when we get those contracts.” He noted that the firm hasn’t engaged in a big hiring sprint yet, but he feels confident that he’ll be able to get the talent when needed.

So what’s next for Dynamic Strategies? “We have a two-fold business plan,” Hahn said. “The first thing is to grow organically, so we brought in the senior vice president of sales.” The rest of the company’s growth will come from mergers and/or acquisitions.

“The danger right now for small businesses is that they are getting support from people who may not know enough to keep their organization secure. Many are still bringing in the neighbor’s kid to “fix” their stuff when they really need to support their organizations from a secure and proactive standpoint. We can bring our enterprise experience to smaller companies and help them grow and while being secure.”

Dynamic Strategies has begun a new initiative to help companies align their  IT operations with their business goals in a concrete way. “We are changing our business delivery model to include an actual written IT road map that is based on the client’s business goals,” Hahn said.

When the company starts work with a new client, representatives will not only perform an assessment of the client’s IT capabilities and identify where improvements need to be made (i.e., a mitigation plan), they will also create a written IT road map for the client going forward.

“At the same time, we are having the mitigation conversation, we will be talking with the business decision makers about where they are going, where they want to be and how their IT can take them there,” Hahn said. “We’ll figure out how they want their IT to fit into their strategic plan for growth, company changes, acquisition strategy and other objectives for them. We’ll create an IT road map, which they can review and edit so that it is agreed upon by both teams.”

After the client approves the plan, Dynamic Strategies can use it to drive its services. “Every year we will reevaluate the road map. This is a clear way to deliver our services around business goals.”