Home » News » Catching Up with Heyward Donigan, President and CEO of Vitals 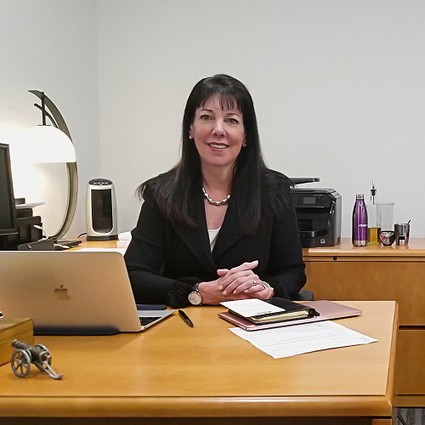 On the day we visited Vitals (Lyndhurst) to meet with Heyward Donigan, president and CEO, she and her team were welcoming eight new members to their organization. The new folks would join the others in becoming the “face of Vitals.”

Donigan, whom we first interviewed in 2015, gave us an update on her tenure at the Vitals helm.

Who is the face of Vitals?

They [the employees] are the face of Vitals. And we’ve actually given our products [personal] names: “Pat” and “Meg.” The “personal assistant team,” they’re Pat, and the “medical expertise guides” are Meg, so we’ve kind of made them approachable. We’re trying to personalize it because they are the face of the company, and that’s who so many people end up talking to.

You’ve overseen Vitals for three years now. How have things progressed? What has been the road been like?

I was just looking at that [last] interview. The predominant area of growth for our company has been the enterprise business. And that’s my background.

We have tripled the size of the enterprise business since those days, and we now cover 93,000,000 Americans who are served by one of our products. So, we have been very successful, experienced enormous growth, put out many new different products. SmartShopper has now been rolled out on a national basis; it was really just in two markets when I got here. VitalsChoice is a platform for a majority of the large Blue Cross Blue Shield plans, along with some local plans like Kaiser, and AvMed in Florida. We also have introduced a product we just literally launched about three months ago that we sold to the state of Connecticut, called “Medical Expertise Guide,” so we’re in rapid deployment, growth mode right now. And we’re just thrilled.

We are stretching to make sure we are scaling to create a platform that will be able to handle the growth we are experiencing. We’ve also just rolled out completely new technology, and we’re in the process of sunsetting our legacy technology, so we’re really excited that we’re on the most current technology platform, with a brand-new user experience for our health-plan clients, who are taking on that technology as we speak.

What’s most important to a Vitals client?

Vitals has revved up its data analytics. How involved was this step?

It’s been the core of our business since its inception. What we decided we needed to do was put someone ? Chris Henderson, who was already responsible for it ? in charge of a division that was exclusively focused on that. It’s called “Vitals 360.” Chris was the general manager and vice president of SmartShopper operations, and I couldn’t have him doing that and really moving the analytics to the next level, as well as keeping the analytics shop running day in and day out.

So, what we’ve done is two big things. We’ve taken Larry West, who was the CTO, and put him in charge of all data engineering for the company. And then we moved Chris out of that role … and put him in charge of a new division that would take data analytics to the next level. Larry has taken over all the engineering and operations, and Chris is going to move forward and with our AI and predictive modeling, using data to optimize and further enhance not only our own business but our clients’ businesses as well.

I don’t think anyone in the world will ever attain any perfection; it’s such an evolving business. You know, it’s artificial intelligence. So, we are, I think, widely viewed as the best data-engineering company in our space. And now we want to be widely viewed as the most futuristic, innovative architectural and engineering and analytics company.

You had a unique way of coming up with the values for the Vitals mission. Please tell us about it.

You really want employees to come up with the values of the company, not have it be something that I sort of dispense from above. So, the values were developed by a group of our employees. And then were launched broadly, so I think that’s pretty cool. Your employees are the representatives of your values. You hire people that demonstrate the values, but then your employees become the values. They are the embodiment of the values. So, if they haven’t really rolled around in it, thought about it and believed in it, it really wasn’t going to work. This was an interesting exercise and it took a long time. It was worth it.

What is your leadership style? Has it changed?

I’m a life learner, and you might notice that I have the Personalysis profile of our team members up there [on her book shelf]. It’s the common personality-assessment methodology we use here.  We obviously can’t gauge who we are, but we can surround ourselves with people who are terrific. We are balanced, so we’re not all thinking the same way. However, having an understanding of who we are and how we think and how we behave is critical to our being able to work together effectively. So, we always sort of start there. And we do a significant amount of leadership development. I’ve had coaches over the years and executive coaches to help me know who I am, where my strengths are, where I have to be really conscious of making sure that I’m not going down the wrong path and hearing people the wrong way.

Finally, your commitment to New Jersey?

Vitals has been headquartered in New Jersey since its founding, and we’re committed to the employees and the state that have helped us grow.