Home » News » Checking Out the Future of AI and How Entrepreneurship Affects Spouses at the Stage of Wisdom: Propelify 2018 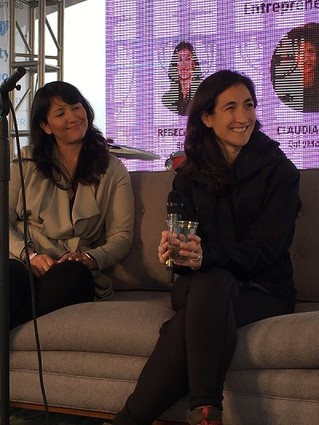 When it comes to ideal employees, Amy, Andrew and Eva rock. They work tirelessly: scheduling meetings, recording conversations and taking on various other mundane but important work-related tasks, while never asking for a vacation, sick days or a pay raise.

Virtual assistants and AI’s overall impact on business was among the dozens of topics covered at this year’s Propelify Innovation Festival, held on May 17 at the Hoboken Waterfront.

In a discussion titled, “The Present and the Future of AI,” Dennis R. Mortensen, cofounder and CEO of x.ai (New York), and Omar Tawakol, founder and CEO of Voicera (Menlo Park, Calif.), spoke on how AI personal assistants are making life easier and more productive in the workplace. They also discussed what possibly lies ahead for this technology.

New innovations in AI are growing at rapid pace, giving businesses the ability to use this technology to increase efficiency and reduce costs. According to industry statistics, 47 percent of organizations with advanced digital strategies say they have a defined AI strategy. Fifteen percent of enterprises are now using this technology, and this figure is expected to double within the next 12 months.

Virtual personal assistants like x.ai’s Amy and Andrew and Voicera’s Eva are claimed to be one of the fastest and biggest growth areas in the AI world. That’s because there’s an urgent need to find solutions to unproductive meetings, which, according to Voicera, result in the loss of tens of billions of dollars each year.

Tawakol said that virtual personal assistants can take notes at meetings, freeing participants to be more engaged in conversations instead of focusing on writing or typing what’s being said. With virtual assistants handling that task, there will be little need to try “to remember what happened at the meeting or what the call was about.”

But there’s still quite a bit of work to do to make these machines more humanlike.

While they can easily schedule events or handle the note-taking function, they still have trouble discerning different accents in languages and picking up certain verbal nuances, such as a sarcastic tone, during a conversation.

A virtual assistant misinterpreting what was spoken at a meeting or a call could create rather than solve problems. Both companies are working to give the machines more emotional intelligence in order to avoid any potential mishaps. “The ultimate goal is to not leave any ambiguity in language,” Mortenson noted.

There’s also some confusion among users over the real value of this technology. “AI [virtual personal assistants] is not meant to speak to you. It’s meant to hear what you are saying and to know what to do,” Tawakol said.

A key goal for ax.i, Voicera and their competitors is to create virtual personal assistants that can “talk” to other AI machines, possibly eliminating the need for email and other ways people currently interact with each other.

Spouses Give Advice on How to Stay Married to an Entrepreneur

While living the life of an entrepreneur can be challenging, it can be especially hard on the spouse, who may be unprepared for the frequent ups and downs associated with this career path. But it doesn’t have to be that way if the spouse supports his or her partner’s decision to be an entrepreneur.

That’s just one piece of advice that Rebecca Price and Claudia Page gave to the audience during another discussion at Propelify’s Stage of Wisdom: “Series M: Married while Entrepreneuring.”

Price, a vice president at data-management company Enigma Technologies (New York) and the wife of Propelify CEO Aaron Price, is committed to her husband’s pursuit of his entrepreneurial dream because she understands that it’s not a 9-to-5 job with a regular paycheck and benefits.

Instead, entrepreneurs can be found working days, nights and weekends, with little or no income when starting their businesses. “Anytime you’re not working on your business, you’re not getting it done,” Price noted.

Page, who’s a senior vice president at video-sharing technology firm Dailymotion (New York) and has been married to an entrepreneur for 10 years, said that a spouse needs to show patience and empathy toward his or her entrepreneurial partner, especially during rocky times.

A 2016 study on entrepreneurs and their spouses conducted by the Harp Family Institute (Atlanta) found that entrepreneurs create a greater level of trust and confidence in their partners when sharing both the good and bad times with them. The research also showed that when couples create a common vision of the future, their satisfaction in all areas of life increases.

Both women agreed that one of the keys to marital bliss with an entrepreneur is to always celebrate the moments when their mates achieve an important business goal, such as winning a new client or raising more money to run the company. This is necessary because it helps entrepreneurs better handle the mental anguish they sometimes endure when things don’t go the way they want for their fledging businesses.

Price believes that the best way for entrepreneurs and their spouses to live in harmony is to take each day as it comes, as there’s no way of knowing if and when a business venture will become successful. “It’s a journey, not a final destination.”