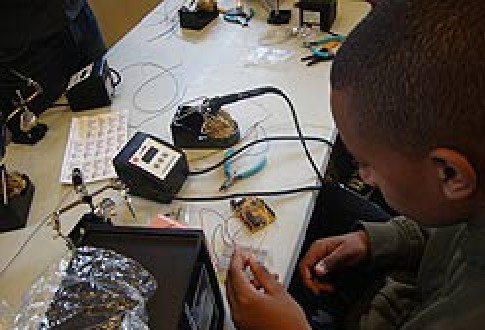 Teaneck-based Cognizant has announced that it is expanding its Making the Future education initiative, adding after-school and summer programs and scholarships.

In addition, for the third year in a row the company sponsored the Young Makers Pavilion at the World Maker Faire, which took place Sept. 21-22, 2013, at the New York Hall of Science (Queens).

Cognizant has been busy in New Jersey, too. In an interview with NJTechWeekly last year, Mark Greenlaw, vice president of sustainability and educational affairs, discussed his firm’s initiative with the Newark Museum. The company has sponsored programs that focus on “young makers,” some of whom hail from Newark’s Innovation Academy high school.

The ninth- and 10th-grade teens with internships at the museum work 10 hours a week to learn how to do high-tech, hands-on projects so they can teach others. They started with 2-D modeling, and then used a digital fabrication toolto create stickers and T-shirt stencils. They then made their patterns into 3-D objects.

“Our grant included a 3-D printer. Thereafter, we also included electronics and the Arduino platform,” Greenlaw said. One boy designed a game controller that can be used for PlayStation, Greenlaw told NJTechWeekly.com, then learned to program in Scratch, the MIT programming environment for children, so children were able to use the controller.

An important program component is a “teach back” function, letting teens teach others what they have learned. They also have to know the subject matter well enough to teach it, Greenlaw noted.

The Newark Museum continues to use the Makerspace for ongoing learn-by-doing initiatives, with weekend and drop-in sessions as well as ongoing programs, he added.

In 2013 the museum was chosen as one of 20 new Maker Corps pilot sites, which supports the museum’s continued presentation of Makerspace programming. Maker Corps is a program developed by the Maker Education Initiative, whose founding sponsors include Cognizant, Intel, Maker Media and Pixar Animation Studios. Maker Corps mentors help students at the Newark Museum summer camp to learn by doing, engaging them in creative projects that develop problem-solving skills by connecting science, art and technology.

Also at the museum, students in the greater Newark area have participated in a 14-week, Cognizant-sponsored after-school program that supported the schools’ curriculum. Student projects included microcontroller and video game design and programming, 3-D design and printing and audience-design interaction.

An advanced technology workshop series comprised hands-on, exploratory modules designed to transform students into makers through science, technology, engineering and math (STEM) education. During the workshops, students were provided an introduction to circuits and electronics, learned to solder, built an Arduino microcontroller, were taught programming and implementation and learned maker tool techniques.

Previous: RBR Students Place Fifth in CYBERLYMPICS
Next: Will New Jersey Get its Own Crowdfunding Act? Kyrillos To Introduce Legislation