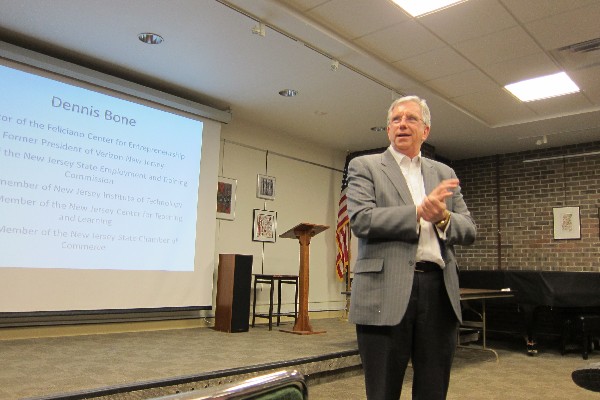 The Launch NJ Meetup that took place on Nov. 18 gave attendees many opportunities to speak with Dennis Bone, former president and CEO of Verizon New Jersey and the current head of Montclair State University‘s Feliciano Center for Entrepreneurship.

“Instead of just having a person of Dennis’s caliber coming up here talking for fifteen minutes and asking him two or three questions, we’re going to stick him up here for an hour and a half, and we’re going to ask him a hundred questions,” Abad continued.

In fact, during one such exchange, an audience member asked Bone to address the ways in which New Jersey’s entrepreneurial ecosystem is influenced by the geographic distance between the state’s economic centers.

Bone speculated that the ecosystem could grow further if one of the state’s urban areas, like Newark or Jersey City, became an entrepreneurial hub. “We need to take [roughly] twelve square blocks in one of those cities and turn it into something that’s very powerful,” with a lot of coworking spaces and entrepreneurs, he said.

This event was planned as the first in a number of interactive Launch NJ discussions with business leaders called the “Entrepreneur Series.”

He first spoke about his work at the Feliciano Center, which opened in 2013. The center offers a Certificate of Entrepreneurship that students can earn after taking three courses. Although these are the only courses currently offered, Bone said that he planned to continue expanding the center’s curriculum and services.

Bone also described some of the decisions he made when starting the Feliciano Center. These decisions were partly based on the practices of schools that have built successful business programs, like the University of Missouri and Babson College, in Massachusetts.

“I started going into their curriculum, into their philosophy, into their programs, into their ecosystem, into everything about them, and there were some things that were just very clear,” Bone said. “A hundred percent of the faculty are entrepreneurs” at almost every one of these schools. The institutions also “create an ecosystem where you can’t tell where the university ends and where the startup community begins,” allowing students to partake in experiential learning.

In this spirit, Feliciano Center courses are completely experiential. The goal is “to create an authentic entrepreneurial experience from start to finish,” Bone told the audience.

Academically diverse teams are another focus of the Feliciano Center. “Take that chemistry major, and the music major, and the coder, and the psychology major—put them in a team, and they’ll look at problems differently, and they get better solutions,” he explained.

Bone also said that he wanted to make the Feliciano Center stand out for its focus on “nurturing women entrepreneurs.” He added that “Women entrepreneurs are very underrepresented in this whole startup economy — extremely underrepresented, by most statistics more so than in the STEM fields.” However, he said that female students have occupied more than 50 percent of the Feliciano Center’s enrollment so far.

To illustrate what the classes at the Feliciano Center are like, Bone described a course called “Entrepreneurial Mindset and Innovation.” He said that this course is about learning what’s inside the head of an entrepreneur. Every class features an entrepreneur who “spends the first hour” telling his or her story.

When one of the Launch NJ audience members asked Bone for an example of how students grow by taking Entrepreneurial Mindset and Innovation, he answered that students learn to recognize entrepreneurial opportunities through creative thinking.

That’s why one component of the course is a workshop called “creativity boot camp.” In this three-night program, students are presented with items like cardboard boxes, duct tape, tarps, and string to solve an unconventional problem. For example, a team of students may be told to make a piece of clothing without thread or cloth.

Bone told the attendees that the value of a rich ecosystem is demonstrated by the success of schools like Babson, which is surrounded by an active entrepreneurial community. That’s why he started attending Meetup groups and formed his own, Montclair Entrepreneurs, which meets at Montclair State.

Bone explained that participating in New Jersey’s ecosystem helped him meet people like Jason Frasca, a former business executive turned full-time faculty member at the Feliciano Center. It also allowed him to meet Todd Nakamura, the founder of Google Developer Group (GDG) North Jersey, who collaborates with Bone on projects like Google’s Solve for X initiative.

Bone also speculated that a resource center run by Montclair State could be used to help small business owners in places like Paterson. There are “a ton of social service agencies” in Paterson that could benefit from free social-entrepreneurship consulting, Bone told the audience.

During the question-and-answer session for this segment, Bone was asked how much social entrepreneurship differed from traditional entrepreneurship. He responded that there is “significant overlap” between the two fields.

Bone added that many tools used for traditional entrepreneurship could be equally helpful for organizations that address social problems.

One of those tools is the Business Model Canvas, a one-page chart that entrepreneurs fill in to develop a concrete plan for their companies. The chart consists of nine boxes with headings like “key partners,” “value propositions,” and “revenue streams” — items that are relevant to many different kinds of organizations.

He also pointed out that other tools, like websites and digital marketing, could be just as helpful in social entrepreneurship as they are in traditional startups.

After Bone’s presentation, Abad asked the audience if they found the question-and-answer format valuable. Participants agreed that it was. Abad then invited the crowd to an after party at Summit Cowork, which he cofounded with Frasca.