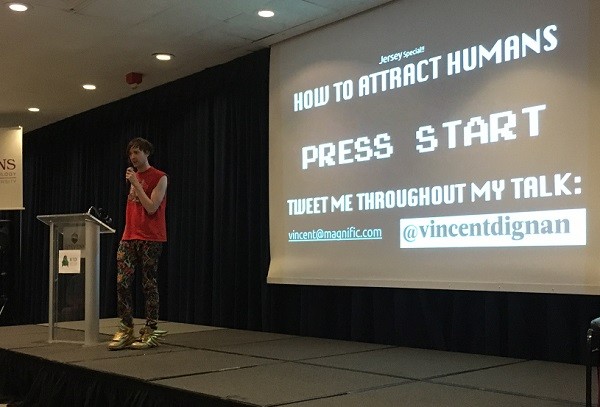 Vincent Dignan, the colorful entrepreneur, growth hacker, author and speaker, took on the NJ Tech Meetup on August 11 with a frenetic talk overloaded with information about how websites and companies can get millions of followers and users for little or no money.

A video of Dignan’s talk, filmed by Jay Treble of NJ.org, can be found here.

“I know what it is like to want to grow a large company and have no money to do it,” he told the audience of more than 150 people at Stevens Institute of Technology, in Hoboken.

“Three years ago, I was on welfare and housing benefit with absolutely no money, when I started planning Planet Ivy, my first online magazine. … So I accidentally discovered this thing called “growth hacking,” and it enables you to do a hell of a lot with a hell of a little.” Dignan is in the process of writing a book that he described as a practical step-by-step tutorial on the subject, which he is funding on Indiegogo.

Dignan said that his objective is to give entrepreneurs firepower, tools they can use to fight back. “I love Twitter and Instagram. They’re both free channels. You don’t have to pay to use them. And there’s 200 million people on both those platforms, so it’s really easy to get a lot of traffic that way.”

When a company finds a growth hack that works, it should keep it to themselves, he said. “Don’t tell other people about it. You want to keep that traffic to yourself, whatever it takes in order for you to have that cookie, that only you can keep. As soon as other marketers know about it, it’s over.”

When investors ask how you are getting all that traffic, be obtuse, he advised. Say, “We must be doing something people like.” Everyone wants to believe in magic, he told the audience, “so if you can find a way of getting that traffic and not revealing it, that’s magic.”

Before a company begins to growth hack, Dignan said, founders have to know the basics of the user experience. He then went on a 90-second riff, naming at least ten tools that people can use to improve user experience. Among them was tailorbrands.com, a website that develops a logo for you free online; a list of the five best “call to action” buttons; Optimizely, which helps organizations do A/B testing; and usersthink.com, which allows companies to identify user-experience issues.

He advised startups to plan out every user they expect to obtain through every marketing channel they can think of, including sources like paid ads on Facebook, search engine optimization on blogs, a meetup that you organize to draw in users and even flyers in coworking spaces.

“When most people stop using a product or service, the company leaves them alone. This is wrong because it’s ten times harder to get a new client than it is to retain an old one.” Dignan then showed a photo of one startup founder holding a sign that said “please come back.” If customers stop using their app, they are automatically sent this photo to encourage them to return.

Some 50 percent of app discovery happens in the app store, Dignan said, so users should A/B test their app store copy. He recommended using StoreMaven to increase conversion rates.

In the early days of a startup, spam is good, said Dignan. “All big American startups are built off of the backs of spam,” he noted. And he advised startups that want traffic to follow their example.

In the early days, said Dignan, if you posted something on Airbnb, they would cross post to Craigslist. Buzzfeed ripped off Tumbler and Reddit for articles, creating spammy content around pictures. “They need to get the traffic in order to get the investment.” Now Buzzfeed does quality journalism, he said, but they needed to go the spam route to build up their user base. “In short, go and get your users and customers from other platforms,” he advised.

One of the tools he suggested using is SimilarWeb, where you can find out how much traffic any website gets and figure out if it is worth writing for that blog, or if your competitor is getting a lot of traffic. You can also see where that traffic comes from.

“One easy way to do good Facebook ads is to look at your competitor’s Facebook ads, see how they’re converting, if they have a lot of likes and engagement. Just copy the layout and use it for your ads.”

Earlier in the evening, Aaron Price had recapped Propeller, the major entrepreneurial and innovation event that happened in May in Hoboken. He told the meetup group that “it almost killed me.” It was a big undertaking and involved more financial risk than he was accustomed to.

Also, “We ended up with 8,000 people, but a month before the event we only had 800 tickets sold. It turns out that people who buy tickets to an event tend to buy them the week of [the event], which is not so great for guys like me.” Price said that, for the next Propeller, organizers are figuring out incentives to get people to buy their tickets earlier.

“As far as the program goes, we had 100 speakers and two stages. Next time we will have fewer speakers and try to create a little bit more of an intimate feeling with some of the stages. We’ll also have music throughout the day.” This time they had a headliner, The Naked and Famous, who appeared in the evening, after the entrepreneurial and innovation talks were done; but many people were exhausted by the time the concert took place, so they didn’t stay.

Price said that his goal is to represent the Northeast region, so Propeller might take place again in Hoboken; but the next one might be in Brooklyn or Manhattan or in another New Jersey city.