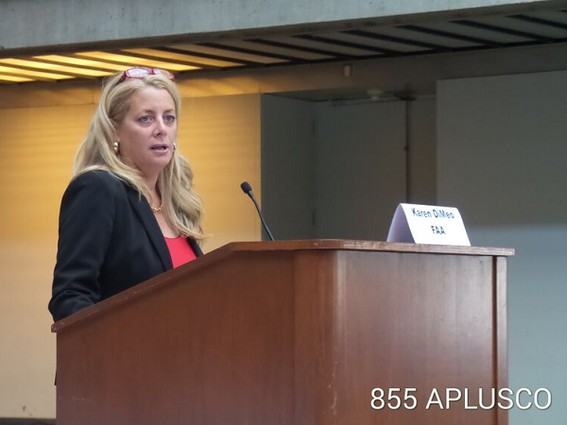 “Welcome to the Future,” said Jim Barrood, president and CEO of the New Jersey Tech Council, as he opened the NJTC DroneBot Works conference on Sept. 17, at Bell Works (Holmdel).

The conference began with a keynote by Karen DiMeo, Unmanned Aircraft System R&D Technical Lead at the Federal Aviation Administration William J. Hughes Technical Center (near the Atlantic City airport). DiMeo discussed the FAA’s outlook on regulating the new industry of robots and drones, and the research being done to underpin these regulations.

Two subsequent panels discussed all the aspects of robot and drone deployment and regulation, and they gave the details of some drone experiments being carried out in the state.

The conference even included drone and bot demonstrations in the cavernous atrium of the Bell Works building. Some drones flew outside, over the company grounds.

Speaking to an audience of more than 300, DiMeo said that the country is at an inflection point for the commercial use of drones, now that the FAA is granting commercial “exemption” approvals to various companies and individuals to operate UAS, while it continues to develop the permanent rules that drone pilots and commercial entities will eventually have to follow.

The first handful of exemptions were given out in September of last year. Between September and February, about 20 more companies or individuals were approved for an exemption.

Today there are more than 1,500 exemptions issued permitting UAS for commercial use. “That’s huge, that is a gigantic leap for us,” she said.

DiMeo told the group that they should “consider this an opportunity for our region.”

She spoke about the psychological pull of flying tech gadgets and why everyone is getting excited about them, noting that one day we may be thinking of drones as smartphones that fly rather than as unmanned flying devices.

The FAA’s UAS unit has grown significantly in recent years. When DiMeo started, eight years ago, her team in Atlantic City consisted of two employees, along with another small team at the FAA working on UAS. Now there are about four dozen people across several units at the William J. Hughes Technical Center, working together as a team to support research for regulating drones, so they can be incorporated into the national airspace system.

“There has never been a bigger challenge, in my opinion,” DiMeo said. The UAS team is working with a lot of universities, including Rowan, Rutgers, Temple, New Jersey Institute of Technology, and Stockton. “We have a lot of partnerships between the agency and academia.”

Change has challenged the FAA, but it is up to the challenge, she noted. “We’ve moved from an industry focused in on aviation and transportation to an industry focused on cloud architecture, sensors and data.” And the FAA has started using words that were never in its lexicon before, like “cybersecurity” and “geofences,” she said. “We are dealing with new technologies that are different from standard aviation technologies that require different research models.”

DiMeo added, “I’ve always worked with aircraft manufacturers, aircraft pilots, controllers and those kinds of entities, and now we are talking to moviemakers, policemen, firemen, Google, Amazon and Facebook. These are the people who now want to operate in the national airspace system.”

The FAA has six test sites across the U.S. where UAS flights take place, she said, and there is a center of excellence for UAS research led by the Mississippi State University, with 14 participating universities, among them Drexel (Philadelphia). “They also have over 100 industry partners who will be doing a lot of research for the FAA.”

The research taking place at the New Jersey facility provides information that regulators must have before they can effectively make rules for the industry, DiMeo later explained.

“In general, we do a lot of modeling, simulation and engineering work. For example, we are working on ‘detect and avoid’ research for unmanned aircraft,” she said. Today aircraft pilots must be able to “see and avoid.” That terminology is written into the regulations. However, as there are no pilots in drones, two drones in the same airspace will not be able to “see” each other. The FAA is working with industry to find ways in which drones could perceive other aircraft by using a combination of sensors, other technology and rules.

Research in “multisensor data fusion” will help air traffic control see drones in the air. The FAA is looking at how to combine different sensors—such as ground radar, airborne radar and Automatic Dependent Surveillance–Broadcast (satellite-based surveillance) to best detect the position of aircraft.

Remember, DiMeo said, we are looking for aircraft in places where they haven’t been before, and some combination of all of the available technology will turn out to be the best solution for locating the craft.

Other research includes what DiMeo calls “safety impact assessment experiments,” which entails drop testing drones from about 50 feet up to see what debris and damage occurs, as well as research to understand what standards will be needed for the maintenance and repair of drones, which, she said, are very different from the maintenance and repair standards of  today’s aircraft.

[ A video of DiMeo’s talk can be found on NJ.org.]