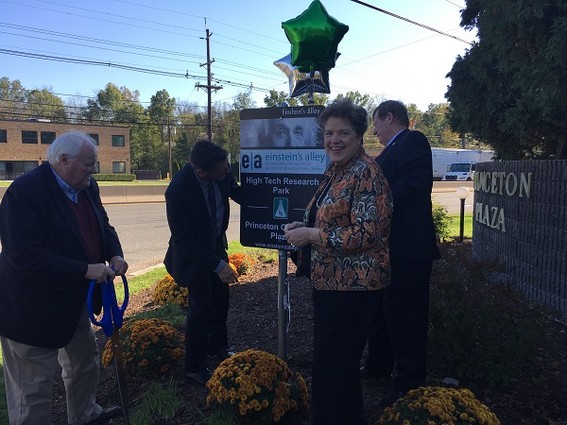 On October 19, Einstein’s Alley, a private nonprofit regional development organization, unveiled a sign at the Princeton Corporate Plaza, on Route 1 in Monmouth Junction.

This ceremony, attended by regional dignitaries, marked the first time the organization has designated a private office development as a part of Einstein’s Alley.

Attending were members of the Einstein’s Alley Board of Trustees and Advisory Council; South Brunswick officials; representatives from the Middlesex County Regional and Princeton Regional chambers of commerce; members of the organization BioNJ (Trenton); Assemblyman Andrew Zwicker; Harold Kent, the architect and developer of the complex; Kent’s management team; entrepreneurs with companies in the complex; and other friends and supporters.

During her dedication speech, Katherine Kish, the executive director of Einstein’s Alley, recounted the history of the organization. “Years ago, former Congressman Rush Holt felt it was important to encourage scientific, research and technology companies to take advantage of New Jersey’s assets. So, with the backing of various stakeholders, Einstein’s Alley was created.”

She added that Einstein’s Alley was considered a way to brand central New Jersey as an innovation center, like California’s Silicon Valley and North Carolina’s Research Triangle.  Princeton Corporate Plaza was chosen for this sign because of its unusual nature. This 250,000-square-foot private development is home to almost 90 research and scientific companies. It was originally designed as a traditional office complex, but was transformed into a configurable laboratory space.

Speaking to those gathered, Zwicker, who had recently won reelection to the Assembly in a hotly contested race, and who is a physicist and head of the Princeton Plasma Physics Laboratory’s Office of Communications and Public Outreach, said that Einstein’s Alley is a symbol of the importance of innovation and of high tech for New Jersey’s overall economy.

“In New Jersey, most often you think about Hoboken or Newark, but what’s happening in suburban towns like South Brunswick is really the root of how we are going to develop and grow through this entire state. Our innovation economy is the single most underutilized piece of our entire economy, and we are poised for growth.” He praised the New Jersey education system; the state’s workforce; and the small to medium-sized businesses, which are the state’s main job creators.

After the sign reveal, the attendees headed back to the Einstein Alley offices to hear from two of the companies that have space at the Princeton Corporate Plaza.

Martin H. Ettenberg, a material scientist who’s the founder and CEO of  Princeton Infrared Technologies, said, “When I was consulting, I kept getting calls about shortwave infrared, which is my specialty.”

People kept asking why the technology was so expensive, he noted, and “by the fifth or sixth time you get asked that question, you think maybe there is something here.” Ettenberg, whose company specializes in the design, testing and final assembly of infrared imaging and detection products for InGaAs detector arrays, applied for contracts under the federal Small Business Innovation Research (SBIR) program. “I won one. I realized I couldn’t just do it out of my house, so it was very nice that I found the Kents,” he said, referring to Harold Kent and to his daughter-in-law Pam and granddaughter Jessie, who manage the complex.

He explained that saying to most office parks that you need 200 square feet of space and a lab would get you laughed off the premises. “They [the Kents] said, ‘Sure, we’ll get you some space.’ So, I had an office and a lab. “We’ve been growing ever since. We are now up to five people … we have a clean room now, and we have some products.”

According to a recent article in US 1 “One unique feature of the Princeton Corporate Plaza is the space inside its four buildings is customizable and includes spaces from 500 to 28,000 square feet. Kent has designed special facilities for electronics manufacturing, lab work, and to fit certain pieces of machinery. The result is a layout that may be confusing to visitors but is perfectly suited to each company that sets up shop there.

“We are customizing spaces every month and moving people around,” said Pam Kent…We’re constantly evolving.” One of the tenants NJTechWeekly.com spoke to added that the complex was almost an incubator for young companies.

Vincent Capponi, COO of CytoSorbents, a medical device company, said that his startup began with six people in 2011 and is now up to 80 people. “We started out as an idea, back in the lab so many years ago, and we went through some dark times, lacking funding, trying to keep the lights on. I have to say we had some great supporters here. The Kents have really stuck with us during the dark times.”

The company’s product treats systemic inflammatory response syndrome, which typically drives people into the ICU, said Capponi. Instead of sending white blood cells to combat a particular problem in one location of the body, the immune system goes haywire, he explained. The white blood cells don’t stay localized where the infection is. They end up going everywhere and attacking all the tissues in the body. “Our device is a basically a filter” that helps counter this problem, he said. It is being used throughout the world and, “Our next step is the U.S.”

The company was initially financed with government grants, and “New Jersey has a great program called the ‘NOL’ program for startups that have net operating losses like we do. We sell them and that brings cash in so we can continue to do our research,” he said.

Kish asked each of the presenters if there was anything that Einstein’s Alley should be advocating for on their behalf. One of the things that is hard on small technology businesses is regulation, said Ettenberg. Often it is figuring out what regulations apply.

“I’m a scientist … and I’m fine at running the business,” but, for instance, there are new regulations for handling government data and for securing it. “I have no IT guy. These kinds of logistical things are very difficult and very expensive to deal with.” Ettenberg added that, with everything from local environmental regulations to Obamacare, he needs help in figuring out which regulations apply to him and in identifying any hidden regulations he doesn’t know about. Members of the audience thought that the state might be able to help with this, perhaps by coordinating some kind of consulting effort for small businesses.

Capponi said that one of the biggest problems for his company has been finding talent, and “that’s even using search firms, which are expensive.” He suggested that the state facilitate a job portal for life-science companies, so they can go in and look at relevant resumes. He also said that, while people commute to Monmouth Junction from Philadelphia and Plainfield, it’s been a challenge, and they’ve had to be flexible on starting times. “U.S. 1, as you know, is not an easy road to travel.”

The state recently made a move to reduce congestion on U.S. 1 by allowing travel on shoulders during peak hours.

Previous: All Eyes on Camden’s Startup Community at Camden Catalyst Gala
Next: Technology Marketing in the Digital Age: How (and Why) to Begin a Social Advertising Campaign