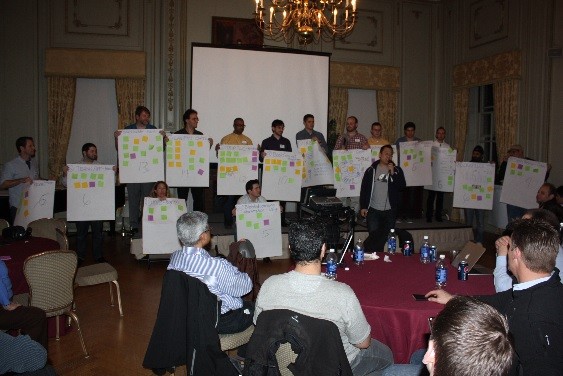 Teams with the most votes come to the front of the room at Startup Weekend Madison March 15. | FDU/ James Barrood

Entrepreneurial energy was in the air at Fairleigh Dickinson University (FDU) in Madison during the weekend of March 15, 2013, when N.J. hosted what appeared to be its first nonstudent, open-to-the-public, official Startup Weekend.

Some 75 mostly tech entrepreneurs began the weekend with ideas and came closer to making them a reality during an intensive, mentor-driven process that saw some attendees successfully hone their initial concepts.

Others used Startup Weekend methods — such as getting out of the building to validate customer interest — to pivot and devise slightly different, better ideas during the weekend.

The quality and variety of the concepts pitched at Startup Weekend Madison were wide, ranging from Johnny Fresh — the idea to offer premium pay-per-use portable potties at crowded events such as concerts and tailgates — to Class Chat, a free mobile app that connects students in the same college classes in an anonymous chat room. The winning ideas will be discussed in a future article.

On Friday night, after listening to a keynote (which also will be covered in a future article) by Garth Holsinger, about 30 hopefuls lined up for one-minute pitches to persuade fellow attendees that their ideas were startup-ready. Everyone who pitched received a poster board bearing their idea. They spread out along the room, putting their posters on a wall.

As participants walked around to vote, the founders further explained their ideas and tried to influence the voters. All the participants voted on four ideas they liked the best by attaching a Post-it note to the matching display boards. Out of this somewhat chaotic but fun voting process emerged 13 possible teams. In addition, those who could convince at least one other person to collaborate with them were able to work on their ideas. For a list of the teams, see this website.

The facilitator, Andrew Young  of the Startup Weekend (Seattle, Wash.) organization, touted these startup events as great places to not only launch companies and learn new methods of working but meet future business partners.

“Being here is one way to show you are passionate and want to do something better with your lives,” Young told attendees. “Hopefully, after this weekend you will have met the people to help you with your startup or you’ll launch a different startup with the people you have met here.”

Ideas come and go, said Young, but a place to meet “designers, programmers and nontechnical ‘ideas people’ and know you can work together with them” is rare.

Young noted that Startup Weekends were occurring in India, Iceland, Germany and France at the same time Startup Weekend Madison was taking place.. Participants, all of whom share the same experience, become part of a family of sorts, he added.

Mentors and coaches are often the unsung heroes of events like these. The coaches at the Madison gathering included Tim Connolly, a business development specialist at Direct North (New York); James Weiss, an entrepreneur and adviser with experience in startups and corporations; Diana Kyser McNeff, managing director of COO on Demand; Gina Tedesco, president of Opus International; Seth Tropper, president of Switch2Health; Herb Moore, a startup-focused attorney at SorinRand (East Brunswick); Mukesh Patel, founder of JuiceTank, a company that describes itself as a “think tank for aspiring entrepreneurs”; Mike Landau, the former CEO of SetFocus now with Exponology; Tim O’Krongly of Prospect Link, which connects marketers with market services companies; Julie Cucchi, founder of 98pt6, a brand consultancy; and Maher Janajri, who is with Accenture’s Global Strategy practice and spends a lot of outside time mentoring startups.

An indicator of the power of mentors is that one of the event’s teams pivoted on the recommendation of  several coaches and wound up winning the competition. Prizes at Startup Weekend Madison were generous, worth more than $10,000. The winning team was entered into the pool of startup finalists for the upcomingTechLaunch (Montclair) accelerator class.

Holding a multitude of conferences, hackathons, startup weekends, lean events and the like across the state builds community and the tech ecosystem in New Jersey and encourages entrepreneurs to build here and stay here, many believe.