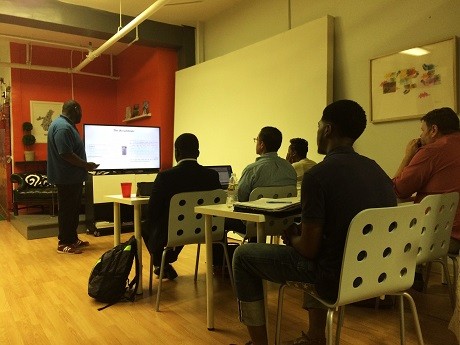 A group of eight entrepreneurs gathered at =Space (Newark) workspace and incubator on Sept. 24 to learn how to create a high concept pitch, elevator pitch and a pitch deck.

The coach for the evening was Anthony Frasier, cofounder of The Phat Startup (New York) and a serial entrepreneur who has been building the Newark tech entrepreneur community for years. Frasier gave advice to the group from the viewpoint of someone who’s been there.

The high concept pitch, Frasier said, is a very brief statement that, according to Venture Hacks, “distills your startups vision into a single sentence” For example, “GarbageDay (the name of Frasier’s hypothetical app) is Weather.com for trash pickups.” Frasier said that he made up this example to provide entrepreneurs with a model to work from.

Frasier next dissected the concept of the elevator pitch, noting that “you can say everything you need to say in 30 seconds without rushing.” He used a formula popularized by Silicon Valley VC Mark Suster, and told the group to time how many seconds they take.

For the elevator pitch, Fraser advised the group to take the high concept pitch idea and expand on it. First you present the problem. “Two out of ten people forget that it’s trash day and end up paying fees,” is a sentence that succinctly describes the problem. Next, the presenter talks about the solution. In this case, the solution would be, “We created an app that lets people know via notifications when it is trash day.” The third part of the elevator pitch tells how the app generates revenue, something like, “The app is free, so we make money by displaying local advertising.”

You also have to explain how the company will gain “traction,” a term that means user adoption, he said. In the elevator pitch you could say “We have 10,000 users.” However, if you don’t have traction you can replace that with an “estimate of opportunity,” which will show the investor where you will get traction, Frasier said.

Also, talk briefly about the competition to show that you have something to bring to market that is valuable, he said. At the end of the elevator pitch, Frasier said, it’s important to make an “ask.” Ask for the person’s business card or if you can call them or send a deck.

In response to a question, Frasier pointed out that changing the formula a bit isn’t a crime. Some entrepreneurs introduce themselves first. “Introducing yourself first, for example, isn’t terrible, but it isn’t what investors want to hear first. They want the idea,” he said. “Hook them in. Have that story ready,” he advised.

He also told the group to spend most of the time in the elevator pitch on the traction and revenue sections, because that’s what investors are interested in.

One of the attendees had a complicated idea that married social good with a profitable company, and wanted to know which idea to pitch. Frasier advised emphasizing the part of the pitch that shows how you’ll make money. “All the investor is thinking is ‘how can I get my money back.’ It gives you a stronger argument to get an investment.”

However, if you are pitching for another reason, say, trying to get a partnership, you might want to change the pitch to appeal to that potential partner. Another attendee said that he had the same problem. He needed to sell to different constituencies: people to work with him, customers, and potential investors.

Frasier’s advice was to take the same formula and write a version for each constituency. When pitching for sponsors for Phat Startup tech conferences, Frasier targets his approach to each particular sponsor. “I literally have to pitch all the time,” he said.

“Who you pitch to is important,” especially when you are looking for money, said Frasier. He noted that the first person who invested in one of his companies just gave him money. He didn’t have any domain experience, contacts or referrals.

“I had an investor who simply had no value outside of just giving me a check,” he told the group. “That might seem like good money, but it’s dumb money.” Smart money is better because the investor can bring experience and connections to the table, he told them.

You  should practice your pitch on people who don’t know anything about what you’re doing, Frasier advised. If you can make them understand even a little bit, it will help you refine your pitch. “It goes without saying you need confidence, passion and energy,” when you are pitching, he added.

Frasier moved on to discuss the deck, which is a PowerPoint (or similar tool) presentation. You have to have two versions of this, he told the group. One version, to be sent by email, should have more information and fewer images. If you email a deck with images standing in for concepts, the investor probably won’t understand what you’re saying.

However, in a personal presentation, investors don’t want to see bullet points all the way down the screen, he said. “You don’t want to be that guy.”

Frasier provided an in-depth description of how to order the slides in the deck and what information to put in each slide, again based on Mark Suster’s suggestions. However, he said that making changes to the order of some of the slides is not the worst thing in the world. For example, if your team is a bit weak and you are a new entrepreneur, put that at the back of the deck.

It’s important to be totally honest in the presentation, and not gloss over anything, he said, noting that when he’s a judge at pitch competitions, he and the other judges will hone in on the points that were glossed over and ask for explanations.

Two of the most common mistakes people make when presenting are talking too long and explaining too much, both of which can make a bad impression with investors, who prefer the presentation to be short and sweet, said Frasier.

Another bit of advice: Know whom you’re sending the deck to, and find out what they want to hear. For example, some VCs and angels focus on the exit. They want to know if the startup will be saleable in a reasonable number of years.

However, other investors think that focusing on the exit shows a lack of enthusiasm for the idea, whereas they want passionate entrepreneurs in their portfolios. With some research, entrepreneurs can find out which kind of investor they are sending their deck to, and then tailor the deck to that person.

Following up after you send the deck is important, Frasier noted.  He advised the group to be sure to tell the investor about the progress the startup has made since you first sent the deck.

“You want them to know you are growing as a company.” And you might be surprised to get a note back saying that the investor is interested in meeting with you because he or she likes the progress you’re making, he said.

Frasier sent the participants home to create their own decks, which were evaluated the next time the workshop met.

Some of the basics of Frasier’s workshop can be found in this blog post on The Phat Startup.