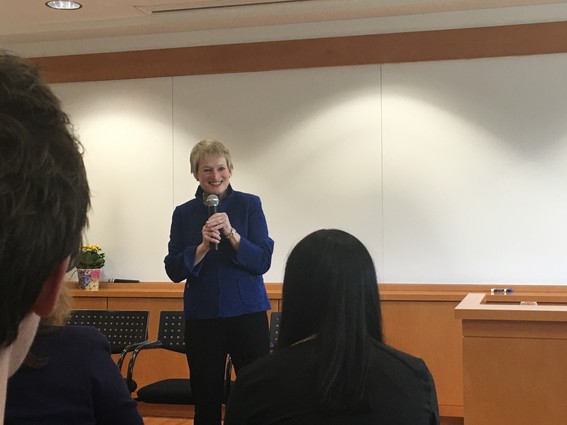 Speaking at an Einstein’s Alley meeting on the Future of Work in June, Rita Gunther McGrath, an American strategic management scholar and professor of management at Columbia Business School, provided strategies for tech companies to avoid stagnation.

She also warned human resources administrators in the audience about the new realities of a workforce that must constantly change.

“We are moving into what I’ll call a ‘tour of duty’ employment relationship,” she told the group. “We have done a fantastic job of teaching a whole generation that companies are not loyal. It would be fool hearted for them to expect otherwise.”  She added, “Today’s work is much more like a contract.”

The meeting was held at Miele Appliances headquarters in Princeton, a building designed by architect Michael Graves. According to Katherine Kish, Einstein’s Alley executive director, the organization’s mission is to create a real ecosystem for innovation, creativity and entrepreneurship in New Jersey. “We like to look at big ideas in non-superficial ways,” she told the group.

In order to think about the future of work, you have to understand where organizations find themselves, McGrath said. Previously, businesses were structured around their industries and only had to look to competitors to figure out how they would act. However things have changed.

Companies must adopt a model of continuous reconfiguration. Most of us think that there will be some kind of big change and you’ll get past it and then things will settle down. When there is more disruption than stability, normal is really being in a state of continuous movement, she said.

Organizations often struggle with healthy disengagement, she noted. A product takes off and has momentum and that’s great, and if you are lucky you have a while to exploit it, she said.  However, technology changes, customers get bored, or everyone catches up with you. This thing is no longer going to drive a competitive advantage for you.

Agile organizations have to think of innovation as a proficiency, she said.