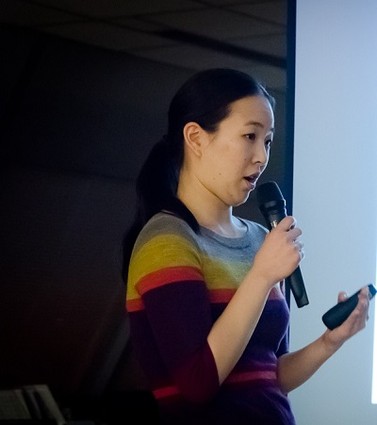 The February 28, 2013 NJ Entrepreneurs and Technology Startups (NJETS) meetup was packed with information about how tech startups should use social media, presented by experts who addressed the topic from different points of view.

Boucher, whom NJETS group organizer Zion Kim said had started the first digital agency in N.J., discussed how to reach and identify a target audience. He provided examples of unique methods he had used in his own practice (one of which involved finding an audience to finance a Chris Brown video when that celebrity’s popularity faltered).

In the Brown case, Boucher defined his goal: generate revenue from music video by influencing fans to pay for premium content.  He created an iPhone app and gave away premium, exclusive content for free. Then he asked fans to pay for an exclusive short movie, a teaser if you will.  By doing this, the audience financed the production of the actual music video.

How can startups find their audience? he asked.  By asking questions such as, Who is my audience?, Where (geographically) is my audience? and How is my audience going to benefit from this project?, you can start to create a relevant audience list, said Boucher. Know the audience’s age, sex, and language. Figure out what motivates them. Create a keyword list focused on not only products and services with your audience in mind but on its emotions, tones and feelings, he advised.

Of course, said Boucher, you have to measure responses to your message or request, whether by using click-through rates or impressions. Know what you want your audience to do, such as checking in to your site or buying your product.

Determining where your audience is and what channels it relies on is key. Use keywords to find audience members by going on Facebook and Twitter and searching those sites. Advanced users can use brand affinity platforms. Once you find the members of your unique audience, add them as friends, follow them on Twitter and reach out to them where they are, Boucher proposed.

You can search for influencers manually by listening and looking, or via programs like Kred or Klout, “which I think are in the beginning stages of what they are going to become,” said Boucher.

Create separate messages through each influencer and be very specific, he suggested. With each one-to-one message, try to provide value to those influencers with content relevant to their audience, so they share your message.

Once your audience speaks, you have to listen, said Boucher. This means replying, retweeting and becoming part of the community. Then measure the outputs, he advised.

This last step is most important, said Boucher: “Always follow up. Figure out a unique way to keep the audience involved.”

Last to speak was Chang, who blazed through a fact-heavy presentation on segmenting and analyzing social media for startups.

The first analytic a startup needs to measure is reach, or the size of the audience, Chang noted. If your audience consists of only 100 people, it doesn’t matter how much effort you put in; your results will be limited, she said.

The second metric is engagement and interaction. Engagement is the overall common denominator and the measure of everyone you can reach. Active engagers are those who tweet and ask questions or comment on your comments. Examples of more passive engagement are likes and retweets.

The next metric to be aware of is brand volume. You need to find out how many people are talking about your brand versus those of your competitors, because “at the end of the day, you have to figure out how you are going to get people to convert to your brand,” said Chang.

Influence measurements show who is interacting with your brand and how influential they are. Some people have the ability to convince others to switch to your brand. “A prime example are VCs. Anything that Fred Wilson talks about immediately gets tons and tons of shares,” noted Chang.

Finally, look at analytics and determine what these social media steps mean for your business, advised Chang. You may be getting likes and comments, “but if they don’t actually convert to more users and more money for the business, you can only last so long in the industry,” she noted.

A key measurement is how many actions can be attributed to social media activity. Do users go to your site? If they do, there is an opportunity to keep them there and effect a conversion. If they never get there and they just retweet posts or talk to you, it isn’t enough. You are not convincing them to actually take action.

The slides from Chen’s presentation are available here. They include references to inexpensive tools entrepreneurs can use and a tutorial on setting up Google Analytics for startups.