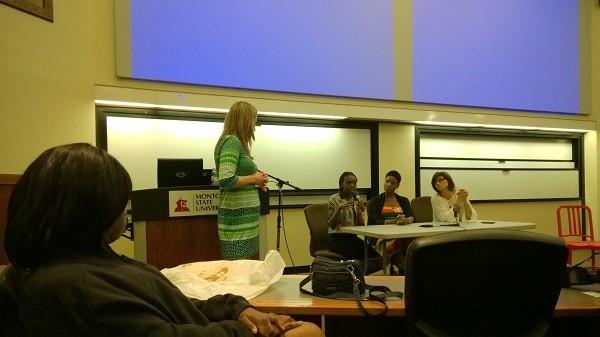 Prominent female tech experts and entrepreneurs gathered at Montclair State University (MSU) for a panel discussion June 25, 2014, that was part of Google I/O Extended New Jersey. The panelists spoke about methods for increasing women’s participation in the tech industry.

Google I/O Extended New Jersey was a one day conference put on by local N.J. developers and entrepreneurs led by Todd Nakamura as a companion to the Google I/O conference taking place in California that week.

Nicole Bryan, a business consultant, and director of corporate social responsibility and a professor at MSU, led the discussion. The participants were Lubna Dajani, an executive at technology consulting and services provider Stratemerge (Ridgewood); Sylvia Wandahwa, a research chemist at Reckitt Benckiser, a multinational consumer goods company with North American headquarters in Parsippany; and April Peters, a Newark recording artist and entrepreneur running Lean Newark this year.

The panel addressed the fact that men continue to outnumber women by a wide margin in technical fields. Bryan said this disparity is everyone’s loss, because many important solutions are overlooked when half the population cannot fully contribute its ideas.

With that in mind, the panelists discussed obstacles to women’s participation in tech. Peters suggested that many women perceive that they need to act like men to get ahead in technical fields. Instead, she said, women should be told they can bring their unique skills and values to the tech industry.

Peters also suggested that lowered expectations discourage young girls from excelling at technical subjects in school. Dajani added that “some girls actually don’t want to be good at math” because doing so would cause them to be less popular.

Dajani attributed this attitude to longstanding social and cultural problems. “Women have been put in a box throughout history,” she said.

Bryan expressed a similar opinion, noting that “we’re talking about how to change entrenched thoughts,” which she proposed are not limited to attitudes toward women but toward innovation in general.

“It seems that we keep generating the same patterns of innovators,” Bryan said, adding that the tech industry’s relatively homogenous makeup is slowing the development of new solutions.

She then asked how the tech industry can be made more accessible to women.

Wandahwa suggested educating girls about their career options through positive role models. She cited Google’s “Made With Code” campaign as a resource for young girls interested in technology. The campaign, which launched in June 2014, features female role models working in technology and shows girls how they can follow a similar path.

Peters said there “needs to be more storytelling” about female inventors and role models. Dajani agreed, noting that women’s contributions are also overlooked in other areas, such as art. “There are lots of amazing women throughout the years, but they don’t get the acknowledgement,” Dajani said.

Bryan asked what technology companies can do to encourage girls’ interest in science, technology, engineering and mathematics (STEM) from a young age. Dajani said companies should establish programs to engage children and “get them thinking of themselves differently.” Speaking from her own experience as a mother of two daughters, she noted that middle school girls in particular are neglected.

Girls can certainly benefit financially from an interest in tech. Bryan noted that the wage gap between men and women is just 3 percent in the tech industry — much lower than the national average. There are still many issues to address, but the relatively small wage gap demonstrates that progress is possible.

“I think it’s important to note that, yes, we are talking about it, but more importantly, we’re finally doing something about it,” Dajani said. She said the United Nations and the European Commission are taking initiatives to ensure there are more women in technology and leadership.

Wandahwa also advocated for action, but on a more personal level: “Sometimes you don’t wanna talk,” she said. “Sometimes you just act. If they say, ‘I don’t think you can do it,’ go and do it.

“Anything a man can do you can do in heels,” Wandahwa said.

Previous: More Details Released on Synchronoss Purchase of Voxmobili for $26 Million
Next: NJ EDA to Back Tech Coworking Spaces in Garden State