Home » News » Figure Out Your Business Before the Money Runs Out, Boice Advises Scarlet Startups 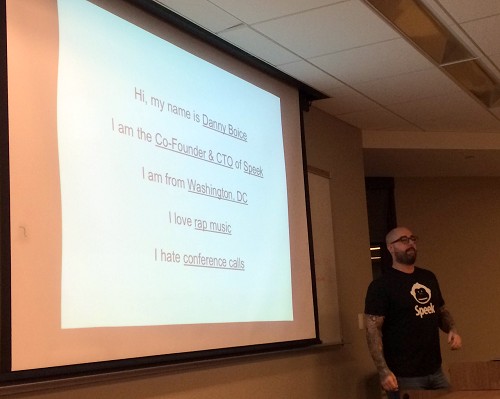 On January 13, 2014, Danny Boice, the cofounder and CTO of Washington, D.C.-based Speek — a 500 Startups-funded company that lets users make conference calls with a simple link (speek.com/YourName) rather than by using phone numbers and PINs —  spoke at a Scarlet Startups meetup at Rutgers Business School (Newark).

It was a memorable night, thanks to not only Boice’s presentation but his openness and honesty with the members of the audience (who included some Brick City Tech Meetup members too) who asked question after question of the startup founder.

Boice began his talk by telling the group that he hates conference calls. Though they make up a multibillion dollar industry, he explained, the calls are hard to both set up and execute.

“Like any good startup, we started out with just an idea on a napkin in a bar,” said Boice. “We were talking about how to fix conference calls. We were into the lean startup methodology and came up with about 30 ideas [for] how to do it. We whittled our ideas down to two or three we thought were good and started validating them.

“We went about figuring out that the link concept was good. We spent several nights and weekends using whatever free space we could find in D.C. and New York. We brought people in to ask about the idea and test it,” Boice recounted. They weren’t the team members’ friends, he said, but people whom they knew who were willing to give their time.

“We got to the point that we knew this was real and we were ready to quit our day jobs, raise some money and make this happen,” he continued.

There is a viral aspect to Speek, Boice noted. Once people decide to use it, they ask others to join. Others then get to experience the product, and if they like it, quite often they will also join Speek.

The product now operates as a “freemium,” but the startup offers a premium version for companies that want branding opportunities and the ability to listen to recorded calls.

Raising money “sucks,” said Boice. “We heard lots of noes. I bootstrapped my first company, but it had done well. My cofounder had previous startups. I thought we had good credentials.” It’s a sales process, and you are selling your team and your idea, he noted.

Speek finally connected with 500 Startups and obtained its first funds, with that company leading the round. 500 Startups was very good to work with, Boice said. “We had two phone calls, [and] they gave us their decision on the second phone call and wired us money within two weeks,” he explained.

Once the money comes in, said Boice, “every decision matters. That money doesn’t go very far. When you are a startup, it’s all about how you figure out your business before the money runs out.”

At that point in Speek’s development, the team had to solidify. “Talent is so important, and getting the team ready is important. Early on you are hiring your friends or people who know you well enough to jump in on this crazy idea. Once we had money and could build a team out, there was no room for weak links,” recalled Boice. You need superstar players or you will die, he said.

“It took us a year and a half to get to the ideal team. We’ve been constantly recruiting and shuffling and finding new people,” he said.

Since the startup’s product is at the intersection of the Web and telecom, the cofounders formed an advisory panel with a four-person board. Two telecom execs who had helped found Nextel agreed to participate. “If we need to get a meeting with anyone in the telecom space, they can get it for us,” Boice said.

On the Web side, Speek found advisers from Add This, which makes a simple widget that users add to their websites to allow sharing. Add This makes its money from grabbing data while its users link to other sites. Those advisers knew how to scale and fundraise.

Speek still remains lean even though it has raised money. “We are growing and post-revenue, but we don’t spend money on anything. We still share hotel rooms! I drove here!” Boice told the attendees.

Some questions Boice was asked at the meetup, and his answers:

How do you prioritize marketing channels?

We are trying a bunch of ways to generate warm leads for our business offering. We took a couple of thousand dollars and spread it out over Google AdWords, LinkedIn, content strategies, search marketing, etc. We hired a good analytics person who will narrow it down to the best channels. It’s all about hitting exponential growth.

How much of an MVP [minimum viable product] do you think a startup needs to get funded?

We had ugly black-and-white screens, but they worked. We got to 200 users that way, and we learned a lot. We’ve now gone through five or six redesigns.

How do you recruit?

We got one of our employees though a tech cocktail event. We acquired an engineering team when AOL dropped them. Also, we were focused on D.C. We went to every tech event, so we had buzz. You build the buzz first, then you go for the big fish.

Did you have any intellectual property?

We actually did file a patent with 30 claims. We got introduced to the law firm AOL uses, and we got a discount. We went very big with our patent claims. We started the process early.

How did you get to your MVP?

In this day and age, one of the cofounders just has to be able to code, and I could code. I worked with an offshore team of Vietnamese engineers. My first startup involved an offshore development center, so I had some background [in handling offshore developers]. We spent a couple of thousand a month to get up and started and pay for that additional help. They were good junior-level developers … [but] it would have crashed with more than a couple hundred users. You have to do this in stages.

How did you get your first users?

We input all of our contacts and imported them to mailing software and told our list that we were launching a new startup and asked them to try it. We made T-shirts and talked at any meetups we could … . We were talking to groups of 10! We needed to find users any way we could so we could feed the funnel to be able to analyze how we were doing.