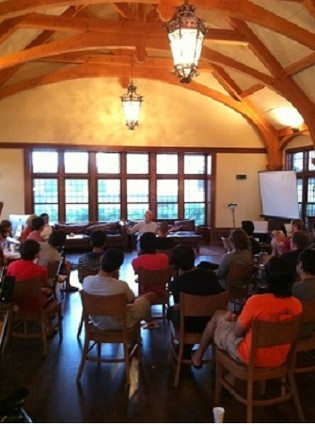 John Frankel came to speak to the Tigerlabs teams as part of the speaker series. | Tigerlabs

As we mentioned earlier this week, mid-August was a busy time for the startup ecosystem in the Princeton area. All in one week, Tigerlabs’ first summer accelerator held its Demo Day, Princeton University’s Keller Center eLab presented its first student demonstrations and Princeton Tech Meetup featured a demo night for members. Below NJTechWeekly.com interviews James Smits, Tigerlabs’ program director, about the coworking-space-turned-summer-accelerator’s contribution to the Princeton tech scene.

How did the idea for Tigerlabs come about?

Tigerlabs started in 2011 as a coworking space. Managing partners and cofounders Bert Navarrete and Jason Glickman had also cofounded Connected Sports Ventures, a startup that builds interactive sports applications for connected TVs and second screens and is still going on today. They wanted to base the company in Princeton. They were two guys in a very large office, so they decided to invite other companies in to use the office as a coworking space. Right now we have seven companies sharing one large open office.

How did it go from coworking space to summer accelerator?

Bert and Jason had a great relationship with the Princeton Entrepreneurship Club, and they both acted as informal advisers. They decided to formalize the relationship by allowing undergraduate students to participate in a summer accelerator.

Do you see yourselves as in competition with the Keller Center eLab?

We are trying to build an entrepreneurial community in Princeton, and the more things that are happening, the better. We think of Keller as our companion in this. We can’t do this alone. We need the community, universities and students to come together to really support entrepreneurship in Princeton.

Why did you decide to offer the accelerator to undergraduate students?

We felt students were really an underserved community. Often times with accelerators, students who want entrée into a program have to pledge that they will drop out of school after the summer ends. We didn’t want to make that decision for the students. We don’t think it’s our place. Also, we think students are particularly underserved in the mentorship they get. I had a great experience at Princeton (I just graduated from there). However, the entrepreneurship community is not yet mature there. So while that’s developing, we think we can help students independently and through our close relationship with the Entrepreneurship Club.

How did you find your student entrepreneurs?

We ran a formal application process, and we didn’t reach out to just Princeton. We were in contact with 50 schools in total, and we received a couple hundred applications. From there we selected some to interview. Then we downselected the seven teams that ultimately became part of our accelerator. While the majority of the students turned out to be from Princeton, we also had people from Virginia Tech, Penn State, Oxford University, the University of Chicago and Lehigh.

What were some criteria for selection?

The students all had very real venture investments. I guess our criteria can be boiled down to team, market, idea and timing. … Something that really stood out about these seven companies was that at the time we funded them, they had all built a product. While that product wasn’t often what they ended up with by the end of the summer, since many of them had pivoted, they could tell us the thesis for their company, what the market was and who was on their team. They could also show us the idea, as it had come to life in an actual product.

The teams’ ability to demonstrate a product was very important to us. We operate over a short period of time, 12 weeks. You need to maximize the value you give the portfolio companies during that short period. It’s much easier for us to help them if they’ve already built a product they can go to market with or something that can be turned around to be marketable. They can work with mentors and advisers to perfect their ideas.

How was the deal structured?

It was structured as a $20,000 convertible note, and in exchange we received a portion of the equity, competitive with other accelerators.

We had seven teams and eight mentors, and basically every company was assigned one or two mentors. They were matched based on their backgrounds. All the mentors had “domain experience” in the area the companies were working in. In addition, we had a long list of advisers — we called them “friends.” They would meet occasionally with the teams so the teams could bounce ideas off them, perfect their pitches and get feedback. On Wednesday nights we’d cater dinner for everyone and bring in a speaker, sometimes an entrepreneur, sometimes an investor or sometimes a sponsor, to talk about their product and how the companies could interact with it.

At Demo Day, Navarrete mentioned that many of the companies had pivoted, changing something about their product or marketing plan. How important was flexibility on the part of the companies?

We preach the mantra of lean startup methodology. The idea behind that is fail fast. It’s not the idea that the company should fail but that an idea or a portion of an idea can fail. … The pivots are really important because they are evidence that people are refining their ideas. They are coming to a much more precise vision of what they want their company to be. That’s especially important as they are packaging their minimally viable product.

In a recent TechCrunch article, Glickman was quoted as saying he didn’t expect the students to stay in the Princeton area but to relocate to New York or San Francisco in the near future. Why won’t you encourage the companies to stay in New Jersey?

I think a company should go wherever the landscape is best suited to support that company and keep it growing. That means a company needs to go where its type of company is. If you are in New York, a lot of advertising and media companies are based there. If your startup deals with that, you should probably be there. If you are in San Francisco, there is a lot of consumer tech and mobile [there], so that’s where you should be.

We are not going to tell anyone to stay in Princeton. That said, some of next year’s companies will be colocating with us in our coworking space. But ultimately companies need to go where they are best positioned for growth opportunities. I love Princeton and I love New Jersey, but we aren’t the tech epicenter of the U.S. That’s two places: Silicon Valley and New York.