Home » News » From the Team at =SPACE, Providing Space and Opportunity to Enable the Next Wave of Tech Innovators 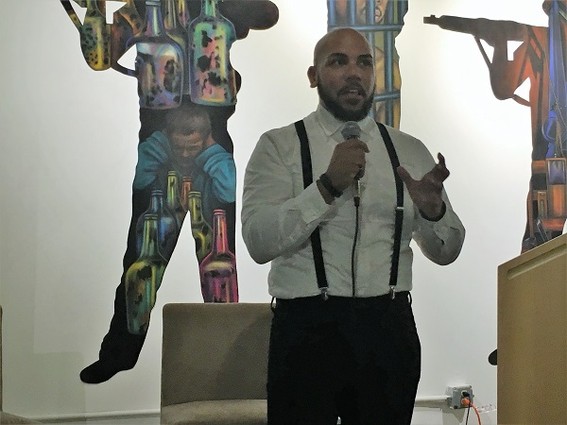 The Growth of = SPACE

The year 2016 was a time for huge steps forward for our sharespace and incubator =SPACE! We moved ourselves into 2 Gateway the home of our investor Kevin Collins. We established a partnership with Gateway Project and Project for Empty Space, a not-for-profit organization that creates socially engaging, multidisciplinary art exhibitions and programming that encourage social dialogue, education, and systemic change for cultural tolerance. This enabled us to provide another layer of creative thinking for our community members (known as SPACE(r)s).

Also, we are able to provide the fastest bandwidth Wi-Fi speeds available in any sharespace period because our facility is being wired with Newark Fiber. Our facility has grown substantially to provide huddle rooms, public team spaces, conference rooms and a great room suitable for work and play!

Our founder Medina was invited to give a TEDx NJIT talk on his years of work with the tech and innovation industry. In his talk called “Just a Boy from Brooklyn”, Medina spoke exclusively about the need for co-working initiatives like = SPACE to serve brown tech and women ventures. He also shared his pain points in seeing so many ignored in the landscape of funding and how through providing “space and opportunity,” we are enabling the next wave of tech innovators to not only thrive, but provide solutions for social issues and pain points in the City of Newark. Medina’s talk was validating for the entire = SPACE team, in that he spoke to our core mission to nurture talent and have more tech companies plant their roots in the city he loves.

The rise of “Home Grown” Tech

The = SPACE team has seen its core community sprint forward in realizing their tech potential. This can be seen within our walls at 2 Gateway Center and in the creation of incubators like Fownders. Our Newark residents are learning they can invent platforms that are fund worthy. The potential is being realized in programming provided by = SPACE to further arm them in the larger tech world.

Infrastructure is the backbone of Newark becoming Silicon City

With Newark Fiber coming online in a big way, Newark has become a truly amazing option for startup- and technology-based companies to make our city their city of choice. We are uniquely positioned to provide high bandwidth internet, access to the seaport, a thriving manufacturing district and a city hall that is open to companies that bring not only their business, but a willingness to push the city forward in an inclusive manner.

Further = SPACE has moved itself to be a true ambassador to those companies by being inside of 2 Gateway Center, the headquarters of our investor Kevin Collins, partner of C & K Properties. We believe 2 Gateway is the perfect building for our initiative since it includes anenclosed walkway to and from Newark Penn station and just a 15 minute commute to the larger tech world of New York. The property has fully functioning high bandwidth fiber optics and is a platinum certified property with an abundance of different office floor layouts and Class A amenities. We find ourselves hosting a myriad of different tech companies interested in being a part of the tech ecosystem.

Finally, on December 10, we hosted an amazing tour called Breakout! We took to the Newark streets to immerse visitors among educators, creatives, real estate developers and policy leaders of our city. While they came in with outsider perceptions of economic malaise, deep seated racial divides and high crime, they left with renewed hope and inspiration for the future of “Brick City.”

Breakout Newark from Breakout on Vimeo.

“I see the solid vision of a unified tech ecosystem being presented in a strong way for the city of Newark. The moving parts are hitting their stride and creating collaborative initiatives together, from forging partnerships with Gerard Adams and Fownders to our moving into a brand new facility,” Medina said.

“The future is more than bright for Newark becoming ‘Silicon City’ because we have the ear of Mayor Ras J. Baraka through Seth Wainer, the chief information officer for the city of Newark. Our education institutions are opening their resources from Rutgers to NJIT and Essex County Community College, and more. The public is aware that there are more possibilities to change the trajectory of their city and their lives through tech. I am not hopeful, I am certain that Newark is Silicon City.”

Previous: The check's in the mail, Rutgers tells vendors after tech glitches
Next: Newark Community Members Observe Increased Interest in Tech Entrepreneurship and a Changing Narrative for Newark