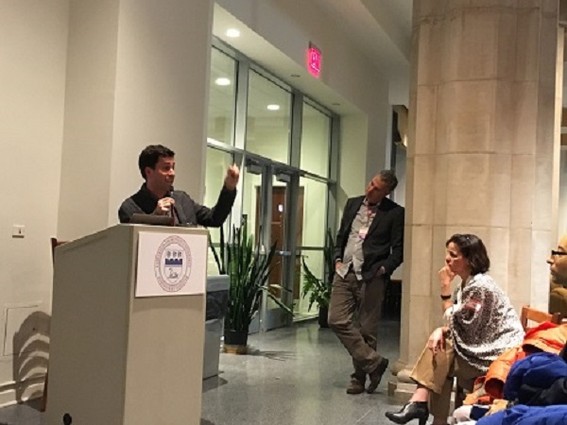 Guillaume Gauthereau engaged with the audience at the Morris Tech Meetup. | Esther Surden

Guillaume Gauthereau brought his message of “Awakened Leadership” and entrepreneurial happiness to the Morris Tech Meetup  on Jan. 20. He acknowledged during the question-and-answer period that it was difficult to get company CEOs to buy into the idea that, if they are happy and connected to their inner selves, and their employees are also happy, they’ll make money.

He noted that CEOs often want his current services and advice (he’s the founder of Gauthereau Group and active at Sequoia Lab, both in New York City) after they’ve experienced a major life-changing event, such as a death or illness, and they realize that their lives have been based on fulfilling others’ and society’s expectations, rather than their own core beliefs. According to Guillaume, core beliefs originate in the heart, not the head.

He added that so-called golden parachutes work against a CEO’s ability to make a change. Many CEOs are guaranteed a big payday if they make their numbers. And if they are making their numbers, they say “why change anything?” The answer, of course, is that too many entrepreneurs report that they are severely depressed. Things aren’t much better in the C-suite of big companies, where the pressure mounts.

Gauthereau came to his conclusions about living life and making money after he had almost suffered a breakdown during his time as CEO of Totsy, a flash sales site offering high-end children’s items to parents.

Totsy was a great idea that filled a market need, he noted. It was  based on the French flash sales business model. The difference between the French model and the U.S. model is that in the U.S., entrepreneurs focus on a particular type of customer. In France, you can buy a pen, a stroller and  a Gucci handbag, all mixed up in one flash sale.

Gauthereau pointed out that Totsy was a victim of its own success. The company had raised more than $45 million from VCs and angels during its four-year existence. But once it had acquired nearly 3 million members, the technology platform it had developed was unable to sustain peak traffic, which spiked during the flash sales hours.

In any case, Gauthereau had been unhappy long before he learned that the technology Totsy had built was starting to sabotage the startup’s success. He told a story about standing in Times Square in 2013, accepting an entrepreneurial award and smiling on the outside, while he was “breaking down inside.” He looked at the crowd of entrepreneurs, who all wanted to be in his shoes, and thought, “If you want to be me, you should know there is a cost to it.”

What was making him miserable? His personal compass was broken. What he learned at business school about success and happiness wasn’t making him happy.

It wasn’t necessarily his business struggles that caused his breakdown, he asserted, although they were many. As CEO, he was spending 80 percent of his time fundraising so that the company could scale. “I met more than 450 VCs in the country during the four years I was with the company,” he noted. “As entrepreneurs, we forget about this. We want to run our businesses. But it just takes so much time to flirt with those guys, to get to know them, so you can marry them at some point.”

When he did raise money, he couldn’t raise enough to really push the site into the clear. And his VCs were continuously putting pressure on him. He found that he had to reduce the size of his team, and was pressured into firing someone who had made significant contributions to the company and was a great employee.

He was also confronted with other business problems, especially in the area of warehousing and logistics. Totsy had to change its warehouse four times in 18 months, signing new contracts each time. The warehouses simply couldn’t handle the company’s meteoric growth. He described how, three weeks before his peak sales time at Christmas, a warehouse shut down and the company had to find another place and move its goods overnight, an almost impossible task.

As the company grew, customer service suffered, and people weren’t shy about letting him know about it on Facebook.

Totsy was eventually sold to another company, and Gauthereau and his cofounder exited without making a dime.

“If you want to make money,” he said, “don’t be an entrepreneur. Go into real estate or finance.”

What was ultimately making him unhappy was the disconnect between his inner self and how he was operating on a day-to-day basis.

Gauthereau packed it all in, sold everything, and backpacked for a year throughout some of the more impoverished areas of the world, including India. While he was teaching English and French and just getting to know the people of different countries, he learned that even extremely poor people could be happy if they connected with their inner selves.

He resolved to live his life differently when he came back to the U.S. And so far he has.

Towards the end of his presentation, Gauthereau gave the following advice to the startup founders in the audience: