Home » Opinion » Get Ready! Propelify (Formerly Propeller) is on Its Way and It Promises to Be Bigger and Better 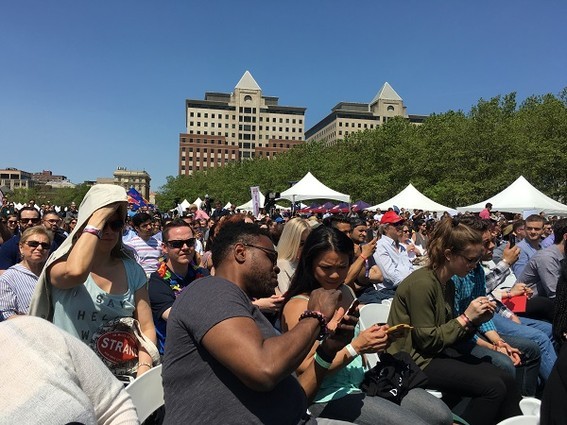 Let’s face it. Last year we weren’t sure if Aaron Price could pull it off. He had a vision for a big regional tech festival to be held on a pier on the waterfront in Hoboken.

It would draw folks from all over the Northeast to listen to tech-entrepreneur speakers, watch drone races, participate in virtual reality experiences and meet prospective employers and each other. And he — along with a hundred volunteers — made it happen. Last year almost 8,000 people showed up.

So can he pull it off again? The indications are good. For one thing, Price says he has a group of experienced, dedicated volunteers who are determined to make this year’s festival even better and “more awesome” than last year’s. They’re even more pumped because they’ve seen what’s possible.

Propelify is scheduled for May 18 (rain date May 19) on a pier in Hoboken facing the New York City skyline, a beautiful backdrop for a day that promises to be full of fun, tech and entrepreneurial enrichment.

Price said that Propelify is intended to be an event where ideas are launched and people are inspired, and the program so far reflects that. “Last year was a proof of concept, and there were a lot of people who doubted we could pull it off. Now it’s about, not just making it possible, but making it amazing and being able to maintain that. You know I have a high bar, and I’m bringing that bar to this event.”

Everyone who went to Propeller last year will notice the festival’s name change. Price said that he had run into some legal problems with the name of the festival, and came to an amicable agreement with the holder of a federal trademark for the name.

Also, having a rain date is something new this year. Last year’s festival was going to be held rain or shine. May 2016 was a very rainy month, but Propeller was held on a warm, sunny day. Price decided to add a rain date “to take some of the risk out of the equation.”

Having Propelify in New Jersey wasn’t a given, as Price sees the festival as an innovation event that unites the whole Northeast. He and his colleagues looked at a lot of location options. “We just wanted a location that was a bit of a destination, inspiring, and was representative of what is next. Hoboken checked all of those boxes. It’s very accessible, it’s beautiful and we’re excited to be back.” NJTechWeekly.com is thrilled that the event is back in the Garden State.

There were certainly some glitches at last year’s event, but Price is determined to fix them for this year’s. “I come from a software background, and it was like having people walk around your creation, rather than experience your digital offering. We got a lot of great feedback. We are improving the attendee experience. Giving people better guidance as to where they can go related to their specific interests.” This includes better signage and communication throughout the event.

For example, the festival will clearly identify which companies are hiring. If attendees are into AI, they will be able to find AI-related companies more easily. Or if attendees want to hear a particular speaker, they’ll know where and when that speaker will be on stage.

Some of the highlights of the event include speakers like Divyank Turakhia, founder and CEO of Media.net (New York); Jason Saltzman, cofounder and CEO of Alley (New York); Albert Wenger, a partner at Union Square Ventures (New York); Jesse Hertzberg, CEO of Livestream (Brooklyn, N.Y.); and Wendi C. Sturgis, EVP sales and services at Yext (New York). These speakers, and others, have already been announced, but Price said that some “celebrity” speakers are close to being pinned down.

Deloitte is hosting the investor speed-dating event and Samsung will be sponsoring the startup competition.  Beatie Wolfe, a musical performer who sang with Bell Labs’ Human Digital Orchestra, will also be there. Her innovative performance last year was not to be missed.

We asked Price what will be new this year. “While I can’t go into the details, we are probably going to have a digitally enabled bouncy house and potentially a Ferris wheel this year,” he said. “We might have a VR arcade or a VR theater. We have some great sponsors that we are thrilled to have joined us, like Deloitte. Jet is back, Staples is involved with Innovation Row, [and there’s] WeWork and Alley.” Entrepreneur magazine continues to be the media sponsor for the event.

“Our biggest partner is Nokia Bell Labs, based in New Jersey. They’ve been a tremendous partner for us.”

Price said that when Propelify launched ticket sales last week to a very small group of people, the buyers came from three countries and 15 states. “This isn’t about just the small players locally. It’s about the big and small players locally and the big players domestically,” he added.

While Price wants Propelify to be a regional event, we encourage our New Jersey readers to show up in force at Propelify and demonstrate that we are Jersey Strong. Our tech innovation ecosystem continues to grow here in the Garden State. And in case you thought the festival is just for tech entrepreneurs and innovators in startups, it isn’t. All of you who work in tech in larger companies in the state will be inspired by this festival and will learn something from it. If you’ve been trying to establish a culture of innovation at your company, sending your employees to Propelify could be just the thing to boost morale and encourage “out of the box” thinking.

Buy a ticket and show off your Jersey pride. NJTechWeekly.com has made arrangements for you to enjoy Propelify at 25 percent off. Just go to the Propelify website, choose general admission and use this code: NJTechWeekly.

Here are the articles NJTechWeekly.com published about last year’s Propeller:

Opinion: Why You Should Go to Propeller and Bring Your Employees By Esther Surden

Propeller Takes Off in Hoboken As Thousands Learn, Play and Propel Their Startups Forward By Esther Surden

Propeller, a Day of Tech Entrepreneurship Learning and Fun, Through Pictures By Esther Surden

Opinion: Propeller Shows Startup Momentum is Building on This Side of the Hudson By Laurie Petersen

Opinion: The “Price” is Right for the NJ Tech Scene. Or Is It the Other Way Around? By Henry Bestritsky

Previous: Tech Biz Tips: Self-Discipline for Tech Entrepreneurs
Next: Businesses Worry that Too Many Millennials Headed Out of New Jersey

225 More posts in Opinion category
Recommended for you