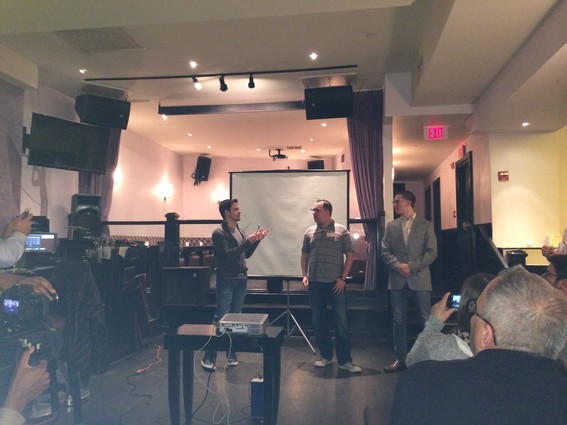 Google Glass was the topic of conversation at the NJConnect Meetup in January. | Esther Surden

Three intrepid Google Glass users made presentations at the NJConnect Meetup in Red Bank on Jan. 28, 2014.

NJConnect organizer Domenick Cilea discussed this emerging technology, pointing out that it is slowly making inroads into many parts of life. For example, he noted, the Sacramento Kings had begun using Google Glass during warm-ups and other nongame activities to provide an immersive experience for users via a scoreboard video.

Some 40 meetup members, all curious about developing with Glass or about the Glass-wearing experience, attended the gathering. The speakers were Chris Ghanem of InnoviMobile (Piscataway); Craig Caruso of CarusoApps (Staten Island and Woodbridge); and John Shammas, director of user experience at Meddle (Atlantic Highlands).

First to speak was Ghanem, who presented “Google Glass 101.” Though InnoviMobile is an enterprise app developer,  Ghanem says the firm is interested in cutting-edge trends in mobility. Moreover, it considers Glass to be a product to keep an eye on as wearable tech becomes more popular.

Google calls Glass applications “Glassware,” the group learned. Ghanem said, “Glass is meant to be designed for now. It’s meant to display data that is of use immediately. It is not meant to replace any mobile solutions; it is meant to enhance experiences.”

Ghanem said Google “wanted to target consumers and display content that is relevant to them. They also want to maintain [the] relevancy of the data that you see. They are trying to pinpoint specific data. If you are at a supermarket, you might want to know what fruit is around you at that moment; or if you are at a ballgame, you might want the score.” Google wants people to fire up a task, do it, then forget about it, he noted.

Describing the hardware, Ghanem said the device isn’t difficult to wear. “The audio sits a bit far back and sort of sounds like a cyberalien talking to you,” he said. The battery lasts about a day — less if you are taking videos all the time.

Ghanem discussed the organization system Google uses for Glass, which sounds a bit like prioritized index cards. Citing just one example of the kind of Glassware that can be developed, he said users could receive a card that tells them, for example, there is a concert in their area that night featuring their favorite band.

Glass uses voice commands and free-form speech, and users can now search with Glass, Ghanem noted. Touch gets the Glass unit’s attention, he said, but if you don’t want to be touching your head every 30 seconds, you can tilt your head 30 degrees to get the device’s attention. If you move your head from side to side (as if to indicate the answer no), Glass will go to sleep.

Meddle’s Shammas, a high school junior who has been interested in Glass and education, is a developer for his school district and serves on its technology committee.

“I wanted to take Glass into the school and see if there is a use for it,” he said, noting that one of its best uses is for first-person tutorials. For example, in auto shop class, an instructor can show students what it actually looks like to be working under a car in real time. Likewise, a culinary arts teacher can demonstrate how to prepare a dish from his or her point of view.

Not many students have access to Glass yet, since it is so expensive and Google has been parceling the device out almost exclusively to evangelists. Shammas obtained permission from his school and teachers to use it every day in class. One of his favorite Glassware products integrates with his Google account, so student presentations can be beamed up to Glass. “You can see your slides and your notes right in front of you,” Shammas said.

The popular notetaking application Evernote is also integrated with Glass, so notes can be beamed up to Glass at any time. In addition, students can take notes using their voices on Evernote to integrate with the product, which Shammas deemed really convenient.

A Glass drawback is its inability, in some circumstances, to connect with Wi-Fi. Noted Shammas, “If you’ve ever been to a hotel, for example, you have to log into the Wi-Fi by putting in a user name and password. There is no text input for Google Glass.”

Shammas ended his talk with a plea. It’s taken 10 years for smartphones to be accepted in schools, he noted. “Only in the last two years, through the Bring Your Own Device movement, have they been allowed. I don’t want the same thing to happen to Google Glass. I think that it is important to show educational institutions what it can be used for.”

Developer Caruso capped off the evening with some of his observations about the Glass devices. “I use them at work a lot. When I go into a tech space, people are completely accepting of them,” he said. However, he noted, using the product in public is completely different. People think you are doing something you shouldn’t be doing, such as taking pictures of them.

Some of Caruso’s other observations:

·       Using Glass in restaurants is difficult because those establishments don’t often have Wi-Fi. If you have an Android phone, you can tether Glass to it, but you can’t do that with an iPhone.

·       If you are in an Apple environment, some features may be disabled.

·       You can no longer hand Glass to someone else to try it out. If you do, that person will have access to all your  information ..”

·       The unit itself is heavy, especially for people who wear prescription glasses. Google did recently announce prescription models. Noted Caruso, “I hear rumors of a third generation that is lighter weight and may be less expensive. $1,600 is a lot to spend on an experimental unit.”

·       Atlantic City just banned Glass from its hotels. In MetLife Stadium, the device has been banned from the stands. You are not supposed to use it to record a football game. As time goes on, the question will become, Will Glass be accepted at those venues?