[Tyler Seville is Associate Director of Policy and Research at the New Jersey Business & Industry Association and Executive Director of the Innovation New Jersey Coalition. This opinion piece was first published here.]

From Edison to Einstein, New Jersey has long been at the forefront of scientific discovery. The Garden State’s commitment to investment, collaboration and talent development supports growth in key industry clusters that drive economic expansion. The 2015 Cyberstates, Tech America’s report ranked New Jersey as the 10th largest Cyberstate. While the 2014 State New Economy Index, the report by Information Technology & Innovation Foundation, uncovered the Garden State as 10th in efforts to be competitive in a global economy. It is #6 in the country for broadband, #6 for number of patents granted and #7 in terms of information technology jobs.

Yet, it is imperative that New Jersey invests in its technology sector in order to remain competitive in this global economy. At the end of the 20th century, New Jersey appeared to be a knowledge-driven economic powerhouse, but aggressive investments in technology-based growth in other states and nations have threatened New Jersey’s future growth. Partnerships with industry and academia are required to develop its prospects.

The Industry
New Jersey’s technology industry or high-tech industry employs over 204,400 people or 6.3% of private sector employment statewide with a total payroll of $22.8 billion (ranked 10th nationwide). The industry is responsible for 7.9% of the state’s economy. Nationally, the industry is responsible for 5.7% of all private sector employment. New Jersey is also nationally ranked in sectors within this large industry: 6th in telecommunications services (30,710 people employed), 7th in R&D Testing Services (30,800 people employed), and 8th in IT Services (82,620 people employed).

New Jersey, tech industry jobs pay on average $111,600, which is 90 percent higher than the state’s average private sector wage ($58,800). The state has the 4th highest industry wage in the nation. The software publishing sector in particular has consistently added jobs (with 150 net jobs in 2010). High-tech firms employed 63 of every 1,000 private sector workers in 2014 (ranked 11th nationwide).

The state, however, lost over 19,000 tech industry jobs from 2008 to 2014, with the greatest job loss occurring during the 2008-2009 economic recession. In recent years the job loss rate has slowed considerably. For instance, from 2013 to 2014 the state lost 620 or 0.3 % in tech employment. Despite these minor setbacks, New Jersey’s r rich history of innovation continues today. For example, Alcatel-Lucent has its US Executive Offices in Murray Hill. Bell Labs, the innovation engine behind Lucent, was granted over 2,000 patents and invested over $3 billion in R&D in 2009.

Academia
New Jersey is home to world class colleges and universities. As a result of its rich academic resources, collaborations within the state between industry and academia are especially beneficial. As such, many organizations/corporations have agreements with neighboring institutions. For example, the tenants at Tech Centre have an agreement with Rutgers University that encourages interaction with researchers and faculty. Those that work for these colleges and universities, gain access to resources such as labs, libraries, and scientific equipment.

A prime instance of industry partnering with academia is evidenced in Stevens Institute of Technology’s recent partnership with the New York/New Jersey Port Authority. This five year, multi-million dollar contract utilizes technological advancements to help build resiliency and improve preparedness at vital Port Authority infrastructure sites during major weather events. Stevens will employ the use of a new supercomputer and 26 new sensors to monitor and measure water levels, temperature and salinity in the New York Harbor. This increase in monitoring is expected to raise the public’s understanding of weather related events and provide pertinent information such as: when and where to seek shelter and when it is best to evacuate the area completely.

Rowan University is yet another example of the collaborations that is possible between academia and business. Rowan recently partnered with Lockheed Martin to develop new radar system applications. Professionals at Lockheed Martin in conjunction with Rowan professors and students will work on radar component prototyping and sustainable models among other projects. This new radar technology will be used in support of U.S. national defense. The research for this partnership will be conducted at Rowan University’s South Jersey Technology Park.

Advance Innovation in New Jersey
As home to some of the nation’s top telecom companies, our information and communications technology (ICT) sector boasts the second-highest concentration of ICT workers in the nation, thanks to employers like: Verizon New Jersey, Inc., AT&T, Ericsson, Cisco Systems and SRI International. New Jersey also has state-of-the-art fiber optic networks and a highly trained workforce of more than 260,000 scientists and engineers.

In addition, the state is home to some 5,000 information and communications technology companies. It is not surprising, therefore, that we consistently rank as one of the top states in the IT industry. In order to stay at the cutting edge of the technology industry, New Jersey must continue to develop innovative ideas and produce a highly educated workforce. 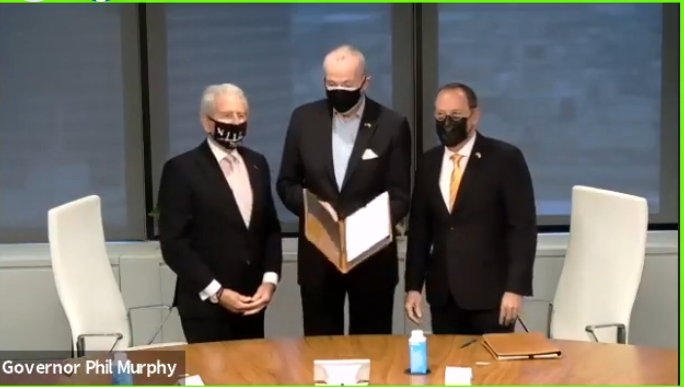