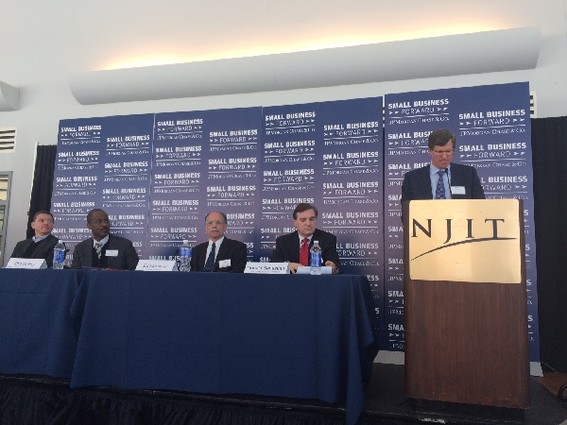 If you haven’t heard about the concept of cluster development, you will. This is an economic development method, based on university research, that helps regions further develop their industries or create whole new ones.

The New Jersey Innovation Institute is taking the lead in cluster development in New Jersey, trying to move Newark and the rest of the state forward.

At an event called “Boosting Small Business Growth and Catalyzing the Economy of Newark,” sponsored by JPMorgan Chase, panelists discussed the concept of cluster development and how it could invigorate the Newark economy.

One of the clusters NJII is trying to develop is health IT. To that end, and with the help of a $300,000 grant from the JPMorgan Chase “Small Business Forward” initiative, NJII is providing support to health IT companies that are just starting to get traction, with at least $250,000 in yearly income.

The Small Business Forward grant is designed to help connect entrepreneurs to the resources they need to succeed and grow, including management training, affordable facilities, and networks to help them access investment and markets for new products.

Speaking at the meeting, Newark Deputy Mayor for housing and development Baye Adofo-Wilson pointed out that Newark had a big city infrastructure and a small city population—a population that’s underutilized. And he said that small business clusters are bringing small city economies back and helping these cities prosper.

“The diversity in these businesses and their knowledge of the local population makes them unique, and gives them the opportunity to survive and thrive,” Adofo-Wilson added. “NJII’s investment will help create the pipeline of businesses that will help the city grow.” However, he noted that these kinds of programs need to be expanded to include more residents.

NJII is deeply invested in the concept of clusters, said Donald Sebastian, president of NJII. Panelist Ed Morrison, the regional development economic adviser at the Purdue Center for Regional Economic Development, noted that the PCRD has studied how regions transform themselves, and then asked the question: What is the role of the university in that transformation? It turns out that regions transform themselves through open collaboration, and are anchored by colleges and universities, according to Morrison.

“We all grew up with strategic planning. Strategic planning doesn’t work well on open and loosely connected networks,” Morrison said. The PCRD has developed a strategy called “Strategic Doing,” which encourages collaboration between companies. Colleges and universities can play a central role in anchoring this process, he said, providing brain power, access to students, and access to innovation and entrepreneurship support.

The PCRD is using big data to figure out which regions have a cluster worth adopting. Once those clusters have been identified, a university, in consultation with the university boosting the cluster, can implement Strategic Doing to help companies form collaborations quickly and move toward measurable outcomes.

The key is to look at assets in different ways and start to understand how those assets can be linked and leveraged, according to Morrison.  Once the assets have been identified, local leaders have to realize that these networks can be formed and designed intentionally, and then developed strategically. The big question the PCRD is working on is how to scale trust and collaboration, he said.

Adam Turinas, CEO of Practice Unite, a Newark startup that operates out of the NJIT Enterprise Development Center, talked about his part in cluster development. Turinas was one of the members of the first cohort in the Health IT Connections program, and he said that the educational component gave him some food for thought about running a business and the lean startup philosophy.

“It kind of stretched our thinking. We were at a stage where we thought we had it all figured out,” he said. He especially benefited from going through the program with eight other entrepreneurs, and said that the some really interesting ideas have come out of the program.

Practice Unite has entered into collaboration with a firm based in the South Jersey/Philadelphia area that will allow Turinas to get national distribution for his product: a mobile health application that allows secure messaging for doctors, healthcare workers and patients.

Otis Rolly, president and CEO of the Newark Community Economic Development Corporation (formerly the Brick City Development Corporation), said that Newark CEDC is organized around different verticals, but that the work of the health IT cluster benefits the health-services and educational-technology verticals the organization has defined. He added that the Newark CEDC was working with NJIT and various organizations so that it would not have to reinvent the wheel with its investments.

Moderating the panel, Sebastian asked if proximity was necessary for building clusters, even in this day of technology and virtual companies. The answer was yes, according to Turinas. “The concept of a distributed workforce for what we are doing doesn’t work for key partnerships,” he said. “We probably spend as much time in their offices as we do in our own offices. And they are doing the same. One of their project managers is going to come work with us at our site so they can understand how we sell our concept. Colocation is really critical.”

Morrison noted that close proximity can help build trust, an important ingredient for successful clusters. But you also need a quality, connected place, he said. People and companies are mobile, and they won’t stay in a dump.

Morrison added that building the narrative going forward is very important. The city and the new industries must put behind them what the narrative used to be, and now tell the story of what it is becoming.

Previous: Accreditrust Gets Multimillion-dollar Strategic Investment from Verisys
Next: Gary Vaynerchuk’s Insights on the State of Entrepreneurship and Startups in New Jersey