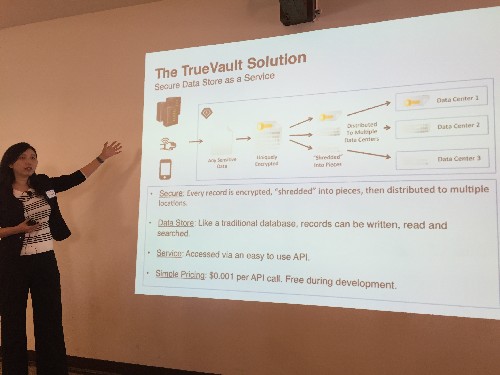 This fall’s platform companies hail from as close as Princeton, as far as New Mexico and California.  All of them had spent time in residence at Tigerlabs, honing their skills, learning from mentors and acquiring customers.

In this second part a two-part story, we cover TrueNorth Healthcare, Ralli, Wellth, NimbusGuru and TrueVault

The New Mexico company TrueNorth Healthcare “is a cloud-based solution for transforming documents and communication in advance care planning,” said CEO Rebecca Adler in her presentation. She added that advance care planning is currently inundated with archaic paperwork that can lead to a complicated experience for individuals, their doctors, their families, and their advocates.

Most people tend to put off end-of-life planning for many reasons, according to Adler, and 66% of adults do not have an advance care plan. TrueNorth Healthcare True Plan helps people establish their advance care planning digitally and save money with an easy, streamlined service created by graduates of Ivy League medical, business and law schools. The site can educate the user with videos about the process, including how to find a suitable proxy advocate (a person authorized to make medical decisions on a patient’s behalf if the patient is unable to). Users can also create their living wills through TrueNorth.

The founders consulted with the American Bar Association to ensure that their services met the legal requirements of various states surrounding advance care planning. One successful pilot program was launched at a hospice, with 75 clients using their service.

Many Princeton residents became familiar with Ralli when it cosponsored the Princeton Half Marathon earlier this month. The app “gives teams a mobile training platform that helps them achieve their fitness goals,” said Sean Henwood, CEO and cofounder. After four weeks in beta, teams have logged over 650 workouts, including 9,500 miles on bikes, 400 miles of running, and over half a million feet climbed.

“They understand that training alone is hard,” said Henwood. Teamwork can be a motivating force to help people achieve their goals. Users can compare their progress with that of their teammates. There is also a ranking system, and messages sent to motivate the teams.  Henwood said that current team-training platforms leave much to be desired, but Ralli makes data collection easy and makes teams accountable for their performance. While nearly 10 million people use health apps now,  most apps are focused on the individual, with group functionality built in as an afterthought, according to Henwood.  So far, Ralli has been used by the running teams at Lehigh and Stony Brook.

Matt Loper, CEO of Princeton-based Wellth, summed up his platform with one sentence: “We want people to get paid to take better care of themselves.”

Loper said that a considerable amount of money is wasted on preventable health-care costs, and that Wellth could target a half-trillion dollars in spending out of the $2 trillion spent each year on health care. The company uses claim data and metrics to target at-risk customer populations with incentive plans to reduce costs.

For example, Wellth can target an insurance firm’s diabetic policy holders. The insurance firm would save money by using financial rewards to motivate its diabetic clients to take their prescribed medicine and manage their blood sugar. Users who improve their lifestyle and show a reduction in blood sugar would be paid for their good behavior. Loper said that Wellth is in the final stage of negotiations with a $60 billion market cap company with 100 million members “that all are potential Wellth users.”

Princeton-based NumbusGuru “is a cloud-based solution that optimizes pharma marketing spend,” by helping pharmaceutical companies monitor their marketing campaigns more closely, said  CEO Venkat Gopi. Pharmaceutical companies wishing to consolidate their marketing reports across various platforms — email, social media and Web campaigns — can use a single dashboard offering them a comprehensive view of all their promotions, and enabling them to track their marketing campaigns more accurately. The site also allows marketers to collaborate with partners. Gopi announced that his organization is working with a “top-three big pharma client” for a rollout in 2015.

Yijie Wang, VP of Strategy and Product at TrueVault, said that her company addresses a need that was created by a 2013 change in the Health Insurance Portability and Accountability Act (HIPAA). Simply stated, because of the change, an estimated 2 million more companies had to become HIPAA-compliant. However, “a big chunk of these companies do not have existing infrastructure to be HIPAA compliant,” Wang said.

Located in San Francisco, Calif., TrueVault hopes to help these companies transition into compliance. Since launching in April, TrueVault’s revenue has doubled, increasing by 30 percent in October alone, Wang said. She also announced that, on her way to Tigerlabs, she had signed up three more clients, and had signed up one more during the presentations.

Previous: Healthcare Apps and Platforms Shine at Tigerlabs Startup Showcase, Part One
Next: Looking through Tech Lens, Experts Give Glimpse of Future of Work at Einstein’s Alley Event