Home » News » NJ Tech Companies » If It’s IT, eMazzanti Technologies of Hoboken Does it All

Carl and Jennifer Mazzanti, respectively the president and CEO of eMazzanti Technologies, have been married for 11 years, live in Hoboken, and have their company headquarters there as well, right in the center of town.

Hoboken is “the birthplace of baseball, Frank Sinatra, and eMazzanti Technologies,” Carl stated proudly. The firm bills itself as a comprehensive, scalable, cost-effective cloud company that offers IT and network services. Regarding his and his wife’s titles, Carl claimed, “They’re kind of appropriate. I believe and think of the organization and of myself as a great operator, and Jennifer has all the ideas. She just gives them to us and I just find a way” to make them work.

Founded in 2001, the company was Jennifer’s idea and, per Carl, “Now for almost 18 years, I’ve tried to be as much of a doer as possible to realize the dream she has for servicing our customers.” eMazzanti Technologies also has also four company acquisitions to its credit, including divisions of Cole Systems, UXC Eclipse (New York), Forceworks (Tampa) and Messaging Architects (Montreal).

Many of the company’s clients are retailers. Carl Mazzanti said that his company offers a payment card industry (PCI) and point of sale (POS) total solution for the client, and he explained by giving an example. “I’ll take our largest customer. Our largest customer has a little over 600 IT people, but we are their global standard for store support. We manage and maintain all their stores.

“Some of that happens because we run a 24/7 office, and almost everyone [we employ] – I mean, it’s been incredibly high percentage – worked in some sort of retail store before they worked for us. We highly value someone who has customer service experience. We wanted them to understand customer service, and, ideally, if they worked in some sort of job where they earned tips, we value that when we’re interviewing and hiring.”

And eMazzanti Technologies is both dedicated to New Jersey and interested expanding its staff there, even with Gotham in view. “We absolutely are hiring. We’ve got open job recs for project management, sales and field engineers. And we need someone else in accounting. Those are the four jobs immediately.”

With clients across many states, as well as in Europe, eMazzanti Technologies is open day and night, “which means you can show up at the corporate office any single moment, the lights will be on, and we’ll have a warm pot of coffee for you,” Mazzanti said while chuckling. “And we’ll have customers that will come by at two or three in the morning.” 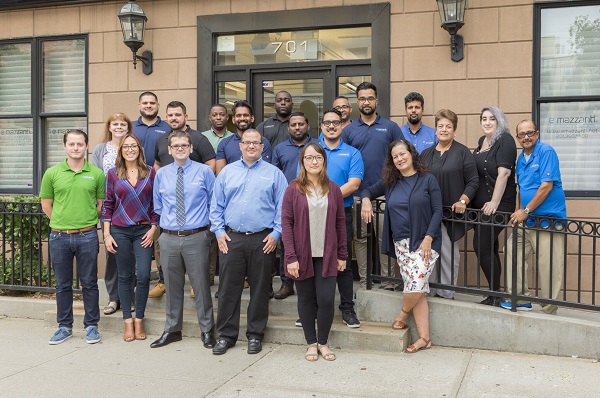 If the issue is a mission-critical event, eMazzanti Technologies will dispatch a team member to solve on-site problems more often than not, even after 11:00 or 11:30 p.m. Indeed, the fact that clients have shown up in the wee hours and were helped is a testament to the organization’s work ethic.

“For many, we’re their IT department. For some, we go up a vertical stack where we operate their retail store setting, or we’ll operate their printers or we’re the operators of all their security, like firewalls, antivirus, identity.”

The team also does installation “because we want to make improvements in our customer’s environment, and then we do the ongoing care and feeding for a fixed, budget-able price, for as long as the equipment and materials are supported by the manufacturer.”

In September, the eMazzanti Technologies team attended the PCI Security Standards Council’s 2018 North America Community Meeting, in Las Vegas. “The intent [of the event] is to educate retailers on best practices,” said Carl. Retailers are focused largely on loss prevention and compliance, he added, “because they want to protect the brand, and in the process of protecting the brand, they’re ultimately protecting the personally identifiable information [PII] or sensitive personal information [SPI] of their customer bases. They can’t control the consumer, but they can control their own systems, and ultimately the brands, so no one’s complaining about them or blaming them for some bad practice.”

What’s in the future? “I’d like to serve more of a similar customer base. …We get a lot of customized, special, unique projects, too. From a vertical standpoint, one of the reasons we go to manufacturing events, legal events, retail events, is those are verticals that we’d like to service more. Those are the verticals that we’re investing in, that’s the customer base we’re trying to attract and obtain.”

Carl defined success as it relates to eMazzanti Technologies. “I think the thing that every single staff member is addicted to in the organization is the positive feedback from our customer base. The thank-you’s … it’s amazing. We get handwritten letters; you know, we’ve got a wall filled with handwritten letters from people. That never happens. The majority of the online feedback about us is all positive. It’s incredibly rare that someone has a bad comment.”