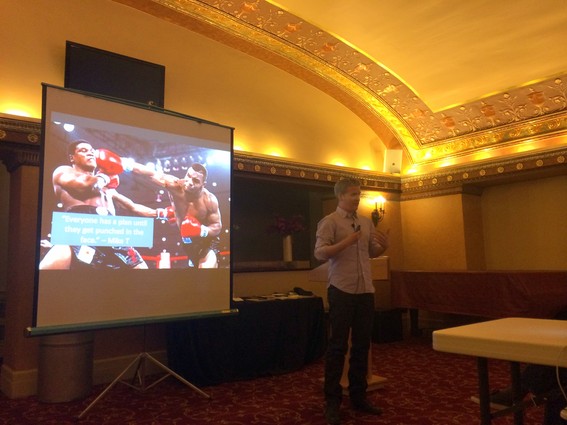 The group also heard a presentation from Aaron Price, founder of NJ Tech Meetup and cofounder of livecube (New York), on the power of technology communities.

Organizer Zion Kim noted that New Brunswick, on the corridor between Philadelphia and New York, should be a great place for tech economic development. He said he is hoping the meetup group will be able to spur that activity.

Price said, “The idea that there is something more in New Jersey than what is happening in New York hasn’t gotten a lot of attention. The fact that we have 11 active, regular, enthusiastic tech meetup groups is a really huge accomplishment for the state. I think we are just getting started. My group is 3,500 members strong; Princeton is about 2,000 … I don’t see why we can’t be in the aggregate 20 or 30, or even 100,000, people.

“This is a large state with enormous resources [and] with a lot of interest and talent around the technology. It is unfortunate it has taken us this long to catch up … we’ve just scratched the surface on what I see as a big opportunity,” said Price. His presentation slides can be found here.

Fuller discussed the evolution of Next Jump’s employee practices and how some radical ideas have made it a company where people like to work. He pointed out that Next Jump wasn’t always like this. The company barely survived the dot-com bust, shrinking from 150 employees to four. The four survivors hated firing all those people and particularly hated the resulting comments on the Web about the company. “The way we run our company now is people-centric; it isn’t sales-centric,” he said.

Next Jump now maximizes the “people potential” of its employees, said Fuller. “We want to build a company that lets us do little things that have an outsized impact,” he said. “We’re not about trying to shove a product down your throat or trying to convince you to do something. What we are really about is doing these little things that allow you to do what you want to do in your life.”

The company’s guiding motto is “Better Me + Better You = Better Us.” Said Fuller, “It’s important to invest in your team, not just increasing their technical skill sets but putting them in stressful situations” and helping them determine how to get out of them, and taking care of their health and welfare. Next Jump has built a gym and brought in a nutritionist to the company. The ultimate goal is to develop people who not only have skill sets but are of good character.

“When someone joins our family, we care about you and we want to invest in the little things that will help you maximize your potential,” Fuller said.

Employees must buy into this unique corporate culture, he added, noting that they are given a long time to ramp up, to make sure they fit in. Very few employees are dropped, he noted, and those who don’t fit in for whatever reason are told that their new job at the firm is to find another job. They can stay as long as they need to in order to do that, Fuller said.