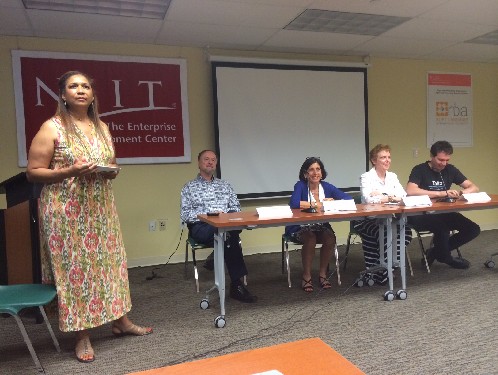 For small tech companies, establishing strategic relationships with large companies can be fraught with danger, according to the panelists at the Innovation Technology Meetup, held July 25, 2014 at the NJIT Enterprise Development Center in Newark.

The panel responded to questions about how startups can find the right fit and what they should look for when selecting an alliance partner.

Sheft suggested startups create a simple matrix to study their own objectives and those of their prospective partner company. You must determine whether you are looking for someone to help with go-to-market strategy or with complementary technology, then see where your interests coincide, she said.

Slowinski advised that startup founders read a book he had coauthored with Matthew Sagal, The Strongest Link: Forging a Profitable and Enduring Corporate Alliance, which discusses a framework for such alliances. He emphasized that startups must ensure they have termination provisions that let them out of a deal cleanly, should something go awry.

“Perhaps you should consider biting off smaller pieces,” Schneier said. If you start with something small, you can build connections and look for the relationship to evolve going forward, she added.

Ahrens, speaking from the startup perspective, said he had learned from experience to judge the intent of the large company immediately. “Big companies … have so many employees, they can drown you in [so many] questions and phone calls and due diligence that a startup — even a 25-person startup — can’t handle doing a deal with them,” he said.

“You as a startup need to bring in revenue,” said Ahrens, which he said is why he asks for prepayment for the work iSpeech is going to do before it will show the larger entity a demo or a sample. He said if they will not pay, he walks away from the project. “You have to get them to put skin in the game,” he explained.

In response to a question about complexity, Ahrens said that with licensing deals, complexity can go through the roof. For his product Talkz, Ahrens said he is in discussions with celebrities, distribution companies and app stores, and everyone wants a piece of the pie.

You just have to make sure that the pie, when split up, makes sense, he said: “Give yourself sanity checks along the way.” Ask yourself whether things are getting too complex or taking too much time compared with the revenue you could make from the deal, he advised. “You can cut deals off early and not waste your time,” he noted.

Sheft said there are many consortiums in the technology world, and startups want to be in on the early days of setting the terms for a consortium. Once a consortium has 15 companies involved and agreements signed, if you are number 16, “there won’t be much opportunity to change things,” she noted.

Another challenge when you deal with big companies is talking to the right people, Slowinski said. “If you are only talking to engineering or R&D — who may be absolutely fascinated with your technology — but … not talking to any of the commercial people, there is a huge risk.”

“And that’s how you kill a small company. Small companies are very fragile, and just the embrace of a large company can kill it,” Slowinski said.