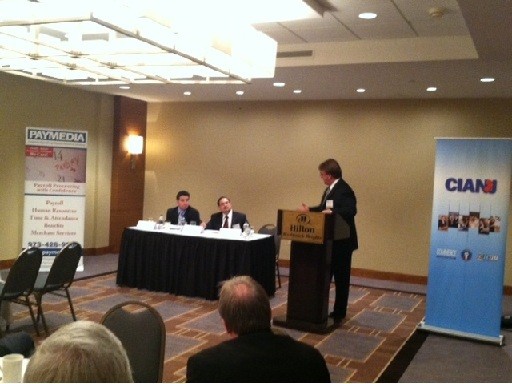 The good news is: there are going to be IT jobs out there for the near future, IT departments are finally being given the go-ahead to increase budgets, and offshoring is slowing.

The bad news: a disconnect between skills being taught and skills needed still exists and, for tech companies, hiring is getting more competitive.

Those were a few of the conclusions of a technology roundtable discussion at the Commerce and Industry Association (CIANJ) in Hasbrouck Heights November 27, 2012.

While hiring is getting more competitive and specialized skills are taking precedence, there will be jobs for high end programmers, Conrad Leao, VP of Operations, Data Inc.(Montvale) told the group.

“Overall, the bureau of labor statistics predicts growth in the IT sector for the next 8 to 10 years,” he said. A global company, Data Inc. focuses on provision of temporary contingent staff in the IT space, taking on fixed price projects and deliverable project work.

Added Scott Schnierer, President, Uniforce Staffing Solutions (Paramus), IT budgets are finally being approved. “They have been on hold for many years, but companies are finally realizing that ROI of investing in IT.” Companies use his firm when their businesses are project based. The language needed will change and so another programmer must step in to take on the new project, he explained.

The roundtable, entitled the IT Talent Challenge, was moderated by Kevin Pianko, a partner at WeiserMazars, a New York accounting firm.

An audience member asked if IT projects are usually taken on at the staffing company’s location or at a client’s location. Leao answered: “That used to be a question that was asked a few years ago. Today the driver is most often cost. It doesn’t matter to the client where we do the programming, as long as we can bring it in at the price point they are looking for.”

Not every project is suitable to take off site, he added. There are times when we ourselves recommend to clients that we do not take the projects off site. There are issues of confidentiality and technical prowess.

Addressing issues of skills development, both Schnierer and Leao noted that there is still a mismatch between skills needed and people with those skills. “The reason we are seeing this mismatch is because there has been a drive towards developing modifiable off-the-shelf software to get medium sized firms up and running without the large investment….to develop customized software,” Leao said.

To install, implement and maintain these off-the-shelf packages, a programmer needs specialized language skills, he continued. The mainframe programmer who has worked for 20 years in COBOL, might understand the business, but he won’t have the skills in LAMP (a skillset made up of Linux, Apache, MySQL, or PHP, Perl or Python), for example, he said.

Schneider added that when the economy was strong, programmers needed a broad skill set to compete, but when the economy contracted, the needs became very specialized. Clients want a one stop shop developer. They tell the staffing firm they want their new hire to know LAMP and some “crazy off-the-shelf program,” that few people know.

In response to a question about how to train the future workforce, Leao said that commoditization of some software functions is spurring much of the offshoring we are seeing. The U.S. can use entry level people, but they will be put in entry level jobs like systems administration and website design, he noted. There is a range of skills that are needed.

The U.S. has a one size fits all bucket, he noted. The problem is that most people come out of college with a computer science degree when computer programming isn’t the only skill set we need. He advised that the U.S. take a skill-based approach to education.

He added, “We do need PhDs. The growth at the high end of the scale is even faster than at the low end.”

Universities and others face a conundrum. By teaching a specific technology, they are matching people to current employment opportunities. But the same problem is going to present itself in a year or two. Their skills will be out of date, Leao said.

“Look at the jobs that are going to be hard to outsource to figure out what we should be teaching,” he advised.

An audience member asked about outsourcing, noting that it has been of limited success for his organization.

One of the issues is communications Schnierer said. “Companies are finally understanding the needs of their internal clients. You are now seeing the HPs and IBMs of the world take a lot of the offshore business domestically. They are able to balance cost and quality of communications.”

Added Leao, the closer you get to the client’s core business, the harder it is to outsource.

“The only way to outsource [successfully] is by identifying very carefully what tasks you will be outsourcing. The tasks most suitable to outsourcing are those that are least dependent on variable elements like communications or embedded knowledge, in other words, tasks that have been so well-defined over time that there is zero tolerance for variation.”

The moment the client requires an interpretive approach on the part of IT personnel, the company is raising its risk level. The client becomes reliant on the communications skill level and higher level thinking skills of the outsourced personnel, he concluded.

To see some of the discussion, please visit this YouTube video made by Data,Inc.