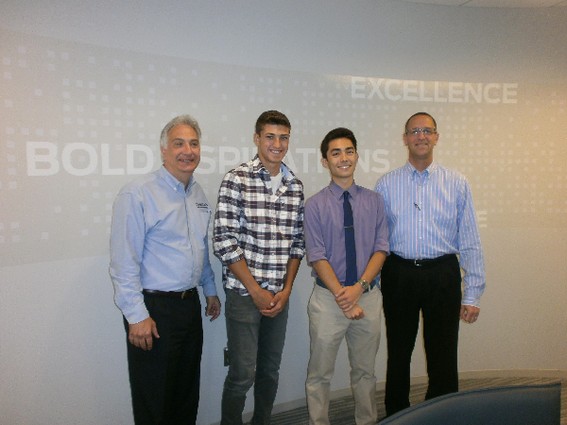 For the fifth year in a row, Juniper Networks (Sunnyvale, Calif.) has awarded two scholarships to budding engineers in New Jersey.

Established in 2012, the $5,000 scholarship provides monetary support to New Jersey residents who intend to major in engineering at a four-year college.

A scholarship committee identifies academically talented “young leaders with the potential to take on the toughest challenges facing our communities, to connect and empower people everywhere, and make a meaningful difference in our communities,” the scholarship website states.

The applicants need to demonstrate community involvement for several years and have a high school grade-point average of at least 3.5.

This year, the New Jersey awards went to Lorenzo Penna and Nicolas Ng. Penna graduated from Bergen County Technical High School, in Teterboro, and will attend Villanova University in the fall to study mechanical engineering. Ng attended Montgomery High School, in Skillman, and will be studying mechanical and aerospace engineering at Princeton.

Penna told NJTechWeekly.com that he became interested in engineering through the pre-engineering program offered at his high school. He chose engineering classes because, as a child, he loved to build with Legos and blocks and enjoyed all kinds of hands-on projects.  And  engineers help people live better lives, he said. “The goal of an engineer is to solve problems and to improve the standard of living for others, and I find great enjoyment in doing that.”

He also mentored youth baseball players in the Heroes & Cool Kids program. “Engineering beautifully combines both my passions of helping others and performing hands-on tasks of constructing different mechanisms,” he said.

Ng said that he had developed his interest in engineering early, visiting his mother’s melanoma-based research laboratory as an elementary-school pupil. By the time he finished high school, he had taken part in countless engineering-related activities, including the Science Olympiad and the Volunteer Science Club. He recalled building a Rube Goldberg machine and other devices.

In an email interview, he told us, “Over the summer preceding my senior year of high school, I was able to partake in the New Jersey Governor’s School of Engineering & Technology, where I spent a month on the Rutgers campus taking classes (robotics, physics, Arduino programming, earthquake-resistant architecture and material science.)”

Ng also completed internships at Memorial Sloan Kettering Cancer Center, in New York, over the last three summers. “I shadowed professors in the optical imaging of potential tumors and aided in the creation of MATLAB- and Python-based programs that streamlined the process of organizing lesion images so that clinicians would more easily identify dangerous growths.”

He plans to use the scholarship money to “pursue goals outside of the classroom over the coming years (including endeavors in establishing clubs at Princeton, studying abroad, and conducting research). In the long term, it’ll mean that I will be able to give back to the world around me through my work.”

Penna and Ng visited the Juniper Network’s OpenLab (Bridgewater) last week to learn more about the company that provided the scholarships. Penna was accompanied by his mother and Ng by his father.

1702 More posts in News category
Recommended for you

Konica Minolta’s Partnership With Google Cloud Could Be First Of Its Kind, Simons Says

The U.S. headquarters of Tokyo-based Konica Minolta is in Ramsey, a fact many New Jerseyans...